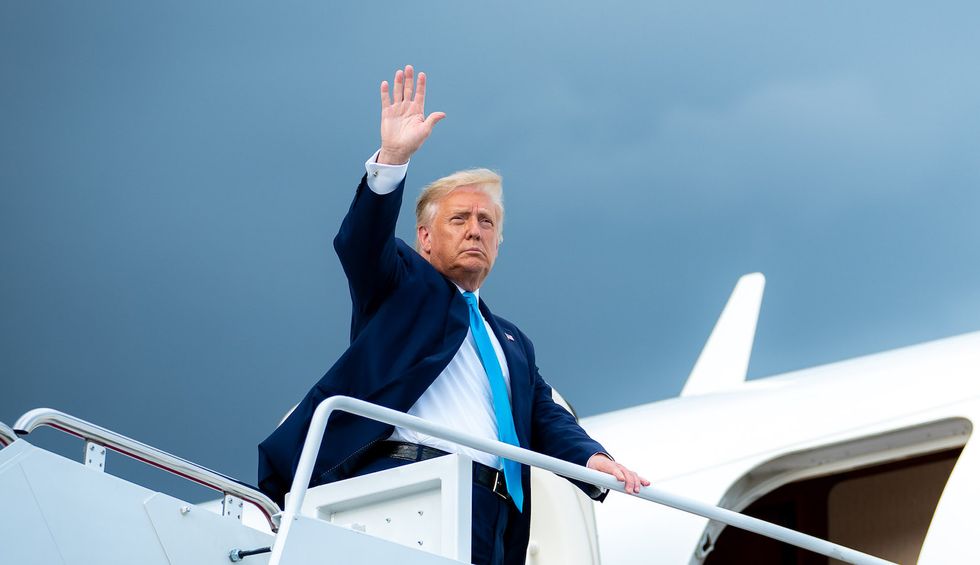 Donald Trump's refusal to commit to a peaceful transfer of power if he loses in November should alarm every American. "You know that I have been complaining very strongly about the ballots,” he said on Wednesday. “Get rid of the ballots and you'll have a very peaceful — there won't be a transfer frankly. There'll be a continuation.” It was Stalin-esque.

It's been pretty clear for months that Trump knows he's losing, and his plan to cling to power rests on getting more Democrats to vote absentee than Republicans, claiming that those mail ballots are inherently fraudulent and then waging a scorched earth campaign to prevent them from being counted or, perhaps, to persuade states with Republican legislatures to send Trump electors to DC even if Biden wins them. Chaos and uncertainty are necessary ingredients.

This raises an obvious question: why are Trump and his allies telegraphing their strategy so clearly? This isn't a James Bond movie; in the real world, villainous megalomaniacs don't reveal the details of their nefarious plots in advance.

The answer is simple: voter suppression.

Lots of polling shows that Democrats are less likely to vote if they believe Trump is just going to steal the elect… https://t.co/R5T9VbAn8n
— Ryan Grim (@Ryan Grim)1600955758.0

For many Americans, especially those living in Democratic strongholds where elections are administered by Republicans, casting a ballot is difficult. Voters face long lines, tight absentee deadlines and have to dot all of their I's and cross all of their T's top have their votes counted. In many jurisdictions, they need to have the proper identification to vote. Those voting by mail have to have faith that the Postal Service will deliver their ballots on time to be counted, and that elections officials will oversee the process in good faith.

Trump is banking on Democrats coming to believe that their votes won't count, becoming demoralized and not putting in the effort to jump through the necessary hoops to participate.

This reality puts us in a tight spot. On the one hand, it is absolutely vital to raise the alarm. Trump is perpetrating an egregious assault on American democracy right before our eyes. Preparation and planning are important. Educating the public about these threats is crucially important. But at the same time, amplifying Trump's promise to sow chaos by disenfranchising millions of voters serves his ultimate goal of suppressing Democratic turnout.

All of which makes it very important to walk a fine line here. This is a situation that calls for the kind of righteous anger that could further motivate Democratic voters and result in a serious blowback for the GOP. It is not a time for despondency or resignation.

The fix is not in, at least not yet. As I wrote last week, massive Democratic turnout that would likely swamp any attempt to undermine the results is a distinct possibility. Trump is historically unpopular, polls find a declining share of Democrats planning to vote absentee, and Biden could very well be in the lead on Election Night, which would blow up Trump's entire strategy.

That outcome is possible if Democratic voters recognize that Trump's bloviations about the election are signs of his weakness, insecurities and fears, remain positive and put in the work to deliver a blow-out win for American democracy in six weeks.