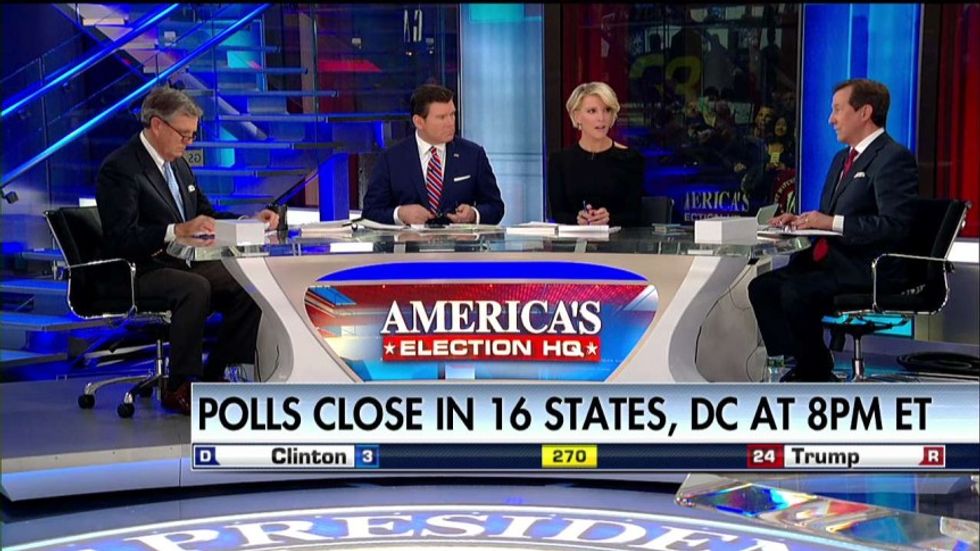 You don't need to be a clairvoyant to see what's coming. Donald Trump is undermining the postal service. He lies constantly about mail-in balloting being ripe for fraud. He's encouraging his voters to vote in-person, and they appear to be listening.

As a result, if he loses--which looks like a solid bet at present--the contest will look tighter on Election Day than it will weeks later when all of the absentee ballots are counted. Trump may even end up in the lead on the morning of November 4 before falling behind as the mail-in vote is tallied.

In the interim, his campaign would sue election officials across the country to exclude ballots for various reasons as he whined incessantly that it's all being rigged. His campaign to delegitimize the vote could result in some substantive effort to steal a second term if the final results were close, or it could only lead to scattered acts of terror by Trump supporters convinced that Deep State pedophiles had conspired to deprive the American people of a savior sent by God. Either way, it would represent a serious threat to our democracy.

And according to Ben Smith, writing in The New York Times, the legacy media appear to be willfully unprepared to counter this entirely plausible scenario.

I spoke last week to executives, TV hosts and election analysts across leading American newsrooms, and I was struck by the blithe confidence among some top managers and hosts, who generally said they’ve handled complicated elections before and can do so again. And I was alarmed by the near panic among some of the people paying the closest attention — the analysts and producers trying, and often failing, to get answers from state election officials about how and when they will count the ballots and report results.

“The nerds are freaking out,” said Brandon Finnigan, the founder of Decision Desk HQ, which delivers election results to media outlets. “I don’t think it’s penetrated enough in the average viewer’s mind that there’s not going to be an election night. The usual razzmatazz of a panel sitting around discussing election results — that’s dead,” he said...

Some particularly wonky journalists are trying to [prepare the public]. NBC’s Chuck Todd said in June that he has been having “major nightmares” about the election, and his First Read newsletter has been referring to “election week” instead of Election Day.

But at the highest levels of most news organizations and the big social media platforms, executives and insiders told me that it simply hasn’t sunk in how different this year is going to be — and how to prepare audiences for it.

Though the hosts and news executives I talked to all take preparations seriously, many seemed to be preparing for this election as they have for others in the past, and some waved off my alarmism.

It's absolutely maddening that anyone could dismiss this as "alarmism" even after months of Trump claiming that this will be "the most corrupt election" in American history. It's a pernicious form of normalization. (Recall that Trump didn't recognize the results of the popular vote in 2016, when he won.)

But the potential problem is much bigger than some lazy, 'view-from-nowhere' journalism. If Smith's reporting reflects the conventional wisdom within the industry, the press--especially the cable networks--are poised to inadvertently assist Trump's chaos campaign by simply covering this election similarly to how they normally would.

The responsible thing to do under the circumstances would be to cancel Election Night coverage entirely. Lose the panels of pundits. Keep Steve Kornacki and John King away from their electronic whiteboards and maps. Don't tease the results coming in from Waukesha County. In the 2018 midterms, 60 percent of voters cast a ballot at a polling place on Election Day; this year, it will likely be half that number, or maybe less. Election Day is meaningless if only a quarter or a third of the electorate votes that day.

Canceling the networks' traditional Election Night coverage would signal to the public that this is no traditional election, and that there's nothing sketchy about counting votes for several weeks under the circumstances. Run normal programming with plenty of reporting on what's happening as the inevitable drama unfolds as we proceed into November.

They should similarly ditch the exit polls. Given how Trump has politicized absentee balloting, it's likely that those voting in-person at a polling place will skew Republican, and while pollsters can account for such sampling issues in theory, there's no precedent to guide them this year. Our exit polls aren't designed to ferret out fraud as they are in some other countries, they're commissioned only to give pundits something to discuss on TV and in their post-mortem columns. Extrapolating from flawed exit polls this year is likely to reinforce Trump's conspiracy theories about the vote.

These would be the responsible things to do. It would represent good journalism. And it would decrease the likelihood of unbalanced Trump supporters committing acts of violence. But it won't happen, because as Ben Smith says, "the media specializes in fighting the last war," and those at the top believe that all of the warnings coming from "the nerds" amount to mere "alarmism."

But more than that, it won't happen because Election Night coverage traditionally means big ratings.