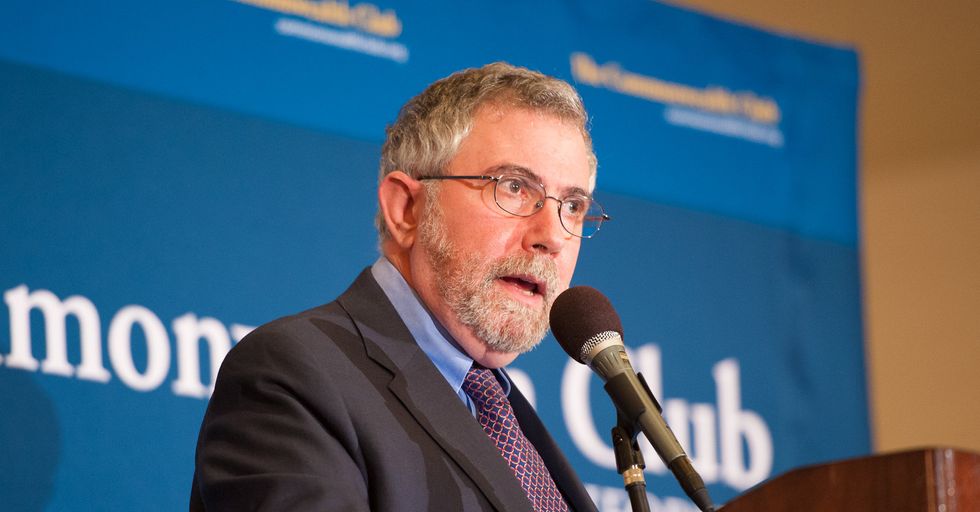 Although the coronavirus crisis has brought double-digit unemployment to the United States, some affluent Americans are continuing to prosper in the stock market. Liberal economist Paul Krugman addresses that disparity in his New York Times column this week, noting how the wide gap between the haves and have-nots continues during the pandemic.

Krugman points out that earlier this week, the S&P 500 “hit a record high” — and Apple “became the first U.S. company in history to be valued at more than $2 trillion.” He quickly adds, however, that “the economy probably doesn’t feel so great to the millions of workers who still haven’t gotten their jobs back and who have just seen their unemployment benefits slashed.”

“The $600-a-week supplemental benefit enacted in March has expired, and Trump’s purported replacement is basically a sick joke,” Krugman explains. “Even before the aid cutoff, the number of parents reporting that they were having trouble giving their children enough to eat was rising rapidly. That number will surely soar in the next few weeks. And we’re also about to see a huge wave of evictions, both because families are no longer getting the money they need to pay rent and because a temporary ban on evictions, like supplemental unemployment benefits, has just expired.”

Stocks are up, but life is getting rapidly worse for millions of Americans. And it's all about bad policy https://t.co/OHjVpJLQiD
— Paul Krugman (@Paul Krugman) 1598010677.0

Krugman goes on to point out that the “real economy,” unlike the markets, is “still in terrible shape.”

“The Federal Reserve Bank of New York’s weekly economic index suggests that the economy, although off its low point a few months ago, is still more deeply depressed than it was at any point during the recession that followed the 2008 financial crisis,” Krugman observes. “And this time around, job losses are concentrated among lower-paid workers — that is, precisely those Americans without the financial resources to ride out bad times.”

Liberal opinion writer Catherine Rampell made similar observations this week in her Washington Post column. The U.S., Rampell writes, is facing “a buoyant recovery resting atop a possible depression” and has “two economies”: (1) an “economy of higher-income, mostly college-educated white-collar workers” and “people who can still work from home,” and (2) an “economy of lower-wage, predominantly non-college-degreed, blue- or pink-collar workers. These are people once employed in restaurants, bars, hotels, salons, gyms and retail stores, who generally must show up in person — but whose customers are now afraid to do so. Their employers have been knocked out of business, many permanently.”

Rampell observes, “In that first economy, U.S. home-builder confidence just matched its highest level ever, as ultra-low interest rates encourage Americans who are still employed to trade up to newer and more spacious houses. In that second economy, home mortgage delinquencies just hit their highest rate since the housing bubble burst a decade ago. Delinquencies for Federal Housing Administration-backed loans — commonly used by lower-income and first-time home buyers — reached their highest level since at least 1979, the earliest year on record.”

According to Krugman, the performance of the S&P 500 should not be used to measure how well Americans in “the real economy” are doing.

“The truth is that stock prices have never been closely tied to the state of the economy,” Krugman argues. “As an old economists’ joke has it, the market has predicted nine of the last five recessions.”