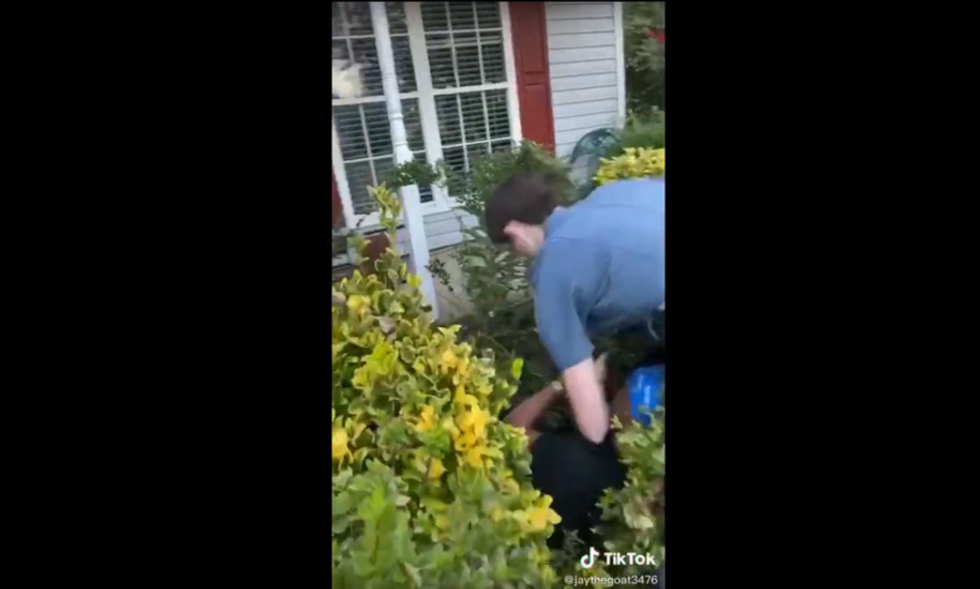 A video posted to TikTok on Wednesday shows Gwinnett County, Georgia, police officer Michael Oxford in a verbal and physical altercation with a Black woman on what is reportedly her front porch. The video, recorded on Tuesday, shows 22-year-old Kyndesia Smith and Oxford arguing: Smith says she doesn’t have to go anywhere, and that Oxford is on her property, noting that that “we didn’t call you.”

The situation escalates very quickly when Oxford orders Smith to” turn around” as he reaches for her wrist. Smith jumps away from Oxford and slips behind a woman, reportedly Aytra Thomas, and there is a scuffle. At this point Oxford pulls out his Taser and hits Smith with it, as she falls into bushes lining the porch. The rest of the video consists of Oxford trying to get handcuffs on Smith.

Gwinnett police spokesman Cpl. Collin Flynn told the Atlanta Journal-Constitution that Oxford has been put on desk duty pending an investigation, insisting that “the police department takes all use of force seriously.”

According to the police report obtained by the AJC, Oxford was responding to a property damage call. A woman reportedly threw a drink at someone’s car, the caller said, adding that the woman had threatened her and her 9-year-old son before retreating across the street. Oxford says he went to question Aytra Thomas across the street, who “appeared to match the description of the person in the neighbor’s security footage,” at which point the other women, including Kyndesia Smith, were yelling at him, making it difficult for him to conduct his interview. It seems that the video begins at this point in the police report.

Smith was reportedly charged with felony obstruction and “simple battery against a police officer.” She posted a $5,900 bail bond and was released Wednesday. This, of course, was not why Oxford was initially attempting to arrest Smith, as the video clearly shows. Flynn says that Oxford has no disciplinary history and has been with the department for about 18 months.

According to TooFab, no charges seem to have resulted from the original call. The witnesses who Too Fab spoke with say that this neighbor has a history of making a lot of calls to the police. Whether or not the initial vandalism occurred, Oxford seems to have not done nearly enough to deescalate the situation, and could have just waited for another officer to arrive and assist him in figuring out the nature of the conflict with the neighbor across the street.