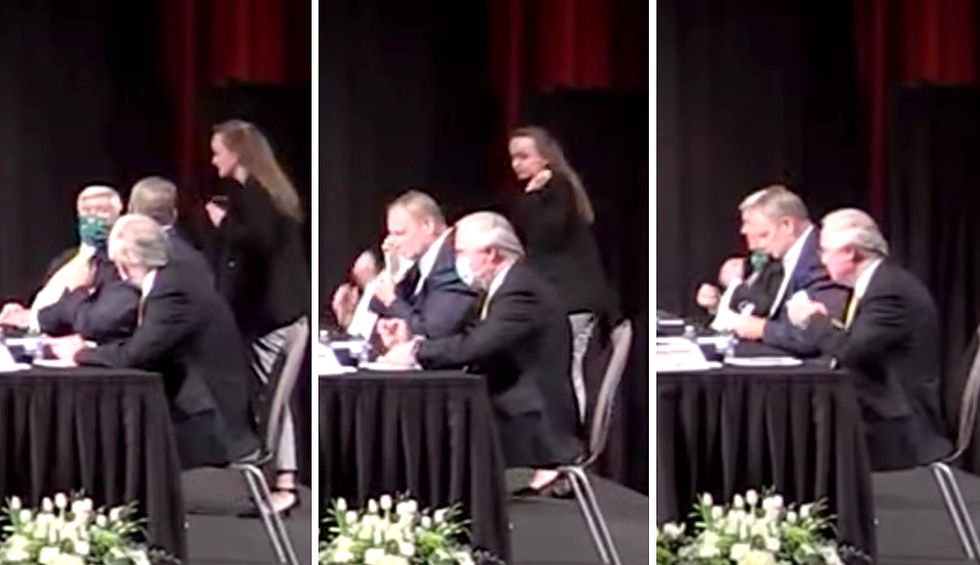 Images via Screengrab.
David Badash
and
The New Civil Rights Movement
May 10, 2020

The Trump administration is not only ignoring CDC and medical experts’ guidelines it is actively working to make Americans less safe.

On Friday Vice President Mike Pence flew aboard Air Force Two to Des Moines, Iowa, to meet with food industry CEOs. His flight was delayed after his press secretary, Katie Miller, tested positive for coronavirus. Several staffers were forced to exit the plane before it took off. Also board were Iowa Republican Senators Chuck Grassley and Joni Ernst, and Secretary of Agriculture Sonny Perdue.

Pence held a roundtable discussion at the headquarters of the Hy-Vee supermarket chain. As The Intercept reports, five industry executives, seated at the table, all wearing masks, were approached by a staffer who asked them to remove their masks before the Vice President would come to the table (video below.)

“The strange request underscored just how committed the White House is to ignoring federal health advice intended to slow the spread of the pandemic coronavirus,” The Intercept observes.

“The Des Moines Register reported that, before the event, ‘staffers with gloves and masks took the temperatures of people who entered the building one at a time.’ Video of the hall showed that very few of the people in the audience were wearing masks.”

Last week President Donald Trump’s personal valet tested positive for coronavirus, as did Pence’s press secretary, and a personal aide to First Daughter Ivanka Trump. Eleven Secret Service agents have tested positive, and another 60 are in quarantine. CDC Director Dr. Robert Redfield, NIAID Director Dr. Anthony Fauci, and FDA Commissioner Stephen Hahn are all self-quarantining after being exposed to a person or persons who have tested positive.