Filmmaker compares reopening the country to reopening Jurassic Park in brilliant essay: 'Life finds a way' — unless you're eaten by a velociraptor 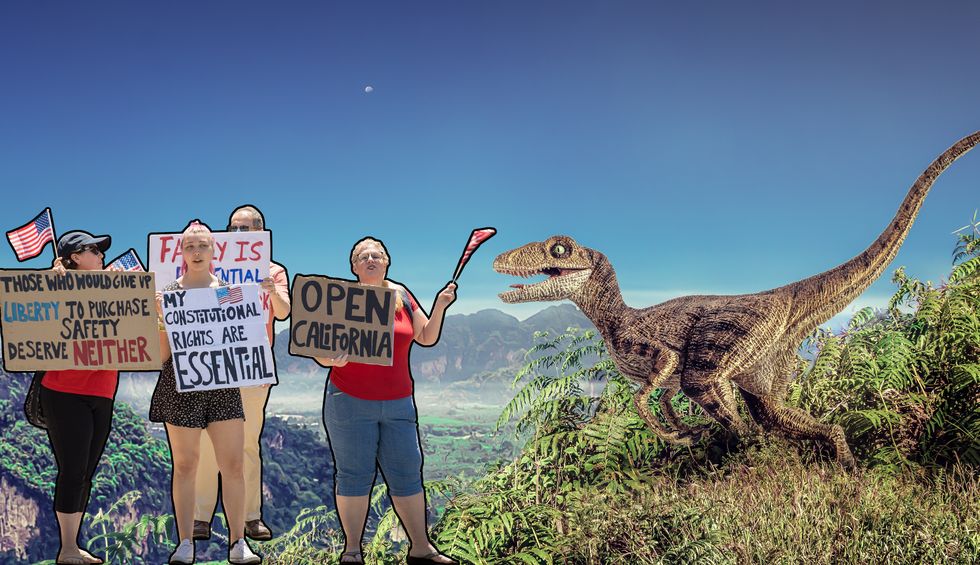 Photos via Shutterstock.
AKALib
and
Daily Kos
May 10, 2020 Media

This essay by engineer, filmmaker and writer Carlos Greaves titled “Sure, the Velociraptors are still on the loose, but that’s no reason not to reopen Jurassic Park” is simply brilliant. It is a wickedly funny and insightful take on the trump administration’s callous obsession to “open up the country”, without preparations and driven by greed and political objectives, never mind the death and destruction it will wreak on the population they are sworn to serve and protect. The comparison with the Jurassic Park story and its greedy owners and investors is remarkably appropriate.

I will paste a few snippets from the article. Do visit the link below to enjoy the essay in its full satirical glory.

Never thought our country’s #covid19 response would reach Jurassic Park levels of incompetence and yet here we are.… https://t.co/zcjRE3mIaS
— Carlos Greaves (@Carlos Greaves) 1588880252

This is how the essay begins -

Hello, Peter Ludlow here, CEO of InGen, the company behind the wildly successful dinosaur-themed amusement park, Jurassic Park. As you’re all aware, after an unprecedented storm hit the park, we lost power and the velociraptors escaped their enclosure and killed hundreds of park visitors, prompting a two-month shutdown of the park. Well, I’m pleased to announce that, even though the velociraptors are still on the loose, we will be opening Jurassic Park back up to the public!

FYI — Peter Ludlow was the nephew of John Hammond, CEO of InGen. Following Hammond's removal from office, Ludlow planned to solve InGen's imminent bankruptcy by transporting dinosaurs from Isla Sorna to a small venue in San Diego. He met his end when he was fed to a baby Tyrannosaurus as its first live prey.

How do you think trump will meet his end, now that his valet and secret service agents have tested positive?

Now, I understand why some people might be skeptical about reopening an amusement park when there are still blindingly fast, 180-pound predators roaming around. But the fact of the matter is, velociraptors are intelligent, shifty creatures that are not going to be contained any time soon, so we might as well just start getting used to them killing a few people every now and then.

trump has even called the virus brilliant and a genius. On April 10, he said —

“This is a very brilliant enemy. You know, it’s a brilliant enemy. They develop drugs like the antibiotics. You see it. Antibiotics used to solve every problem. Now one of the biggest problems the world has is the germ has gotten so brilliant that the antibiotic can’t keep up with it. And they’re constantly trying to come up with a new — people go to a hospital and they catch — they go for a heart operation — that’s no problem, but they end up dying from — from problems. You know the problems I’m talking about. There’s a whole genius to it.

This is a — this is genius that we’re fighting. You know, we’re fighting this hidden enemy, which is genius. Okay? It’s genius, the way it’s attacked so many countries at so many different angles.”

Three cheers to Dr. Ian Malcolm for the ageless quote below. It has made Jeff Goldblum immortal.

As some of you know, Dr. Ian Malcolm, our lead safety consultant, had recommended that we wait until the velociraptors have been located and contained before reopening the park, so he wasn’t thrilled when we told him the news. I believe his exact words were “you were so preoccupied with whether you could reopen the park, you didn’t stop to think whether you should.” Talk about a guy on a high horse.

“Staying in designated safe areas” or “masking your scent” — brilliant 😄

So rather than concentrating on so-called life-saving measures like “staying in designated safe areas” or “masking your scent,” we’ll be focusing on the details that will get our customers really excited, like a wider selection of fun hats, a pterodactyl-shaped gondola ride to the top of the island, and a brand new Gordon Ramsay designed menu at the Cretaceous Cafe.

Undoubtedly. But we’re confident that with a few safety precautions put in place, we’ll be able to keep the level of workplace injuries and deaths just below levels that would elicit widespread public outrage.

And speaking of injuries, I want to take a moment to thank our Jurassic Park EMTs. They’re the real heroes here, am I right? In the process of responding to velociraptor attacks, many of our EMTs get mauled and dismembered by velociraptors themselves. That’s why, as a sign of appreciation, we will be repainting the Jurassic Park ambulance with the words “Hero Mobile” in big bubble letters. We think this is a far more meaningful token of gratitude than the salary increase they requested.

I would add that the trump administration would arrange to deliberately keep the reported number of workplace injuries and deaths just below levels that would elicit widespread public outrage.

So pack your suitcases, and get ready to be reacquainted with the newly reopened, and only slightly more dangerous, Jurassic Park! And remember, life finds a way… unless you’re one of the unlucky ones that gets attacked by a velociraptor, then you’re probably screwed.

The reopening of America

The move to re-open states has begun. Red states will re-open soon and you can bet they will blame rising deaths on minorities, immigrants and Democrats, even as they sanitize infection and death statistics.

Will Businesses be liable for deaths of their workers?

This also reminds me of this sketch on SNL from 2018 where lawyer Donald Glover defends Jurassic World theme park after the deaths of park visitors. Something like this may play out in the near future, which is why the administration is feverishly rewriting liability laws.