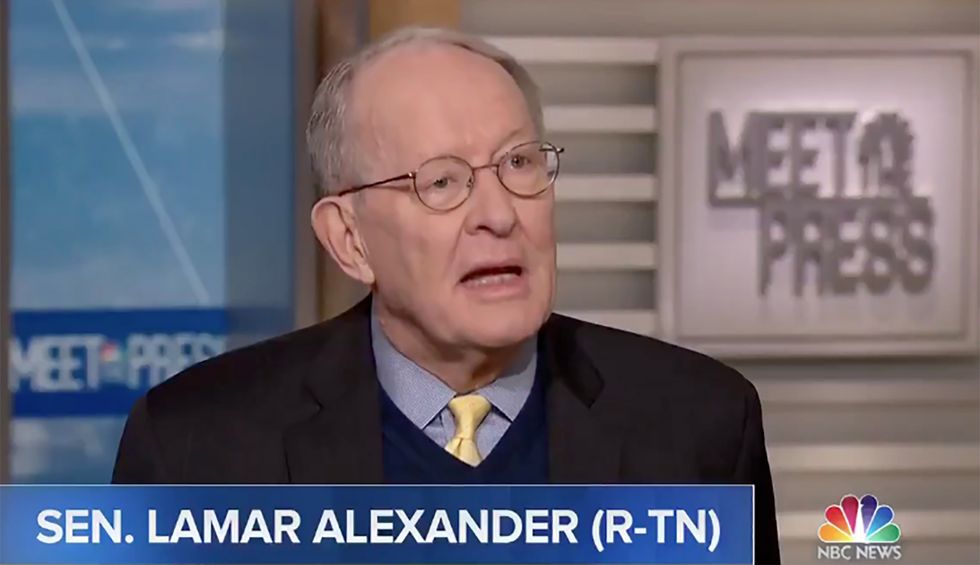 Republican Senator Lamar Alexander is suggesting Donald Trump, who has been President now for three years, didn’t know that if he was concerned about possible corruption in Ukraine related to Joe Biden he should have contacted the Attorney General, as opposed to, say, his personal attorney Rudy Giuliani.

The retiring Senator from Tennessee, who was thought to be concerned about how history will treat him, cast the decisive vote against allowing witnesses to be called during Friday’s impeachment trial. That vote will effectively hand an acquittal to  President Donald Trump.

Continuing his full-throated admission that Trump extorted Ukraine and said so on national TV, Senator Alexander on Sunday’s “Meet the Press” went even further.

“What the president should have done, if he was upset about Joe Biden and his son, and what they were doing in Ukraine, he should’ve called the attorney general and told him that, and let the attorney general handle it the way they always handle cases that involve public –” Alexander told Chuck Todd.

“And why do you think he didn’t do that?” the NBC News political director and MTP moderator asked.

“Maybe he didn’t know to do it,” Alexander responded.

LAMAR ALEXANDER: If the president was upset with what the Bidens were doing in Ukraine, he should've called the att… https://t.co/AeTYS1PyLJ
— Aaron Rupar (@Aaron Rupar)1580656114.0

Even Chuck Todd was not pleased with that answer.

Defending himself, Alexander offered up that now that the trial is nearly over, “it’s up to the American people to say, ‘OK, good economy, lower taxes, conservative judges, behavior that I might not like, call to Ukraine, weigh that against Elizabeth Warren or Bernie Sanders and pick a president.”

Alexander makes many assumptions in that statement.

Here’s how many are responding:

Gotta appreciate Lamar laughing after saying that, giving away that even he knows how absurd and twisted his logic… https://t.co/zES0UsH8eC
— Brian Tashman (@Brian Tashman)1580656581.0

@DavidCornDC Oh Lamar Your reputation is in tatters "Maybe he didn't know how to do it" Is pathetic and your legacy is now shattered
— Renee Shatanoff (@Renee Shatanoff)1580657712.0