'This is historic': Senate passes resolution to thwart Trump's support for the war in Yemen 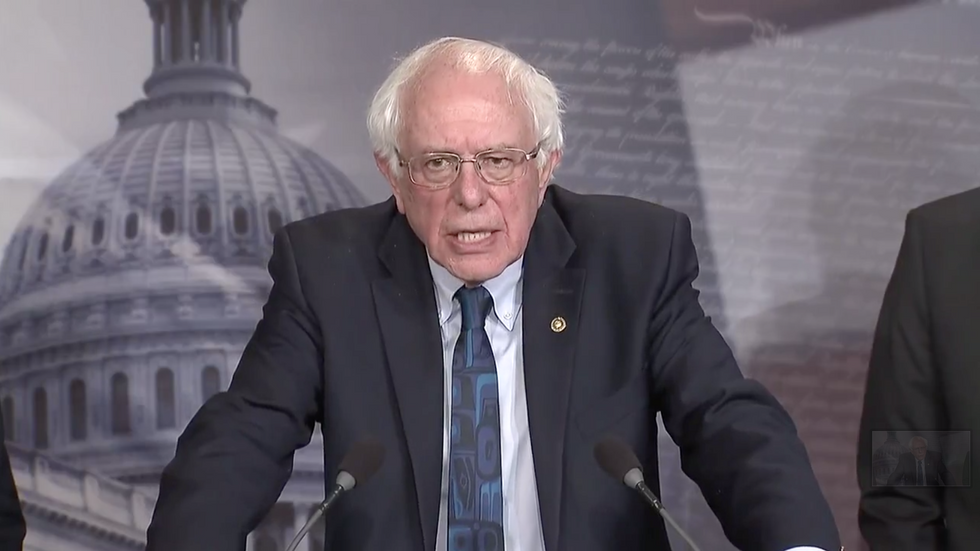 In a major step toward ending U.S. complicity in the world's worst humanitarian crisis, the Senate on Wednesday passed a War Powers resolution to cut off American military support for the Saudi-led coalition's assault on Yemen.

"This is historic. For the first time in 45 years, Congress is one step closer to withdrawing U.S. forces from an unauthorized war," Sen. Bernie Sanders (I-Vt.), the lead sponsor of the resolution, declared following the vote. "We must end the war in Yemen."

Kate Gould, legislative director for Middle East policy at the Friends Committee on National Legislation, applauded the grassroots activists who have been working tirelessly to end America's disastrous role in Yemen.

"The Senate has now taken a decisive step in ending the American facilitation of the Yemen war and the world’s largest humanitarian crises," Gould said. "Millions of grassroots activists, who helped make this vote a reality, want their lawmakers to end this unconscionable war."

Passage of the resolution comes as the Saudis continue to launch deadly airstrikes in Yemen with U.S. backing, worsening a crisis that has already resulted in mass suffering and tens of thousands of deaths. Earlier this week, dozens of civilians—including women and young children—were killed by Saudi airstrikes in Yemen's Kushar district.

According to the United Nations, 14 million Yemenis could soon be on the brink of starvation if the bombing continues. Save the Children, a London-based human rights organization, estimated in a report last November that 85,000 Yemenis under the age of five have starved to death since the Saudi-led coalition began bombing the country.

"The fact is that the United States, with little media attention, has been Saudi Arabia's partner in this horrific war. We have been providing the bombs the Saudi-led coalition is using, refueling their planes before they drop those bombs and assisting with intelligence," Sanders said during a speech on the Senate floor ahead of the vote. "The bottom line is the United States should not be supporting a catastrophic war led by a despotic regime with a dangerous and irresponsible foreign policy."

The war in Yemen is both a humanitarian and a strategic disaster. Let us bring this catastrophic and unconstitution… https://t.co/MWh2JT1dQn
— Bernie Sanders (@Bernie Sanders)1552503184.0

"This Senate vote moves us one step closer to ending U.S. support for the catastrophic war in Yemen, a war that makes America complicit in the worst humanitarian crisis in the world," Paul Kawika Martin, senior director for policy and political affairs at Peace Action, said in a statement.

In addition to putting an end to America's role in the slaughter of Yemeni civilians, supporters said the resolution also reasserst Congress' constitutional authority over war.

"Congressional authority over war was designed to avoid the type of situation that’s been unfolding in Yemen, where unauthorized U.S. military support began without public debate or scrutiny," Martin said. "The Senate's vote to end the U.S. role in Yemen is also a vote to re-democratize our nation's foreign policy."

The Yemen War Powers resolution will now head back to the House of Representatives, the final roadblock before the measure reaches President Donald Trump's desk.

In a statement before Wednesday's vote, the White House said it "strongly opposes" the resolution and suggested Trump will veto the measure if it passes the House. A two-thirds majority vote by both chambers of Congress would be needed to override a possible Trump veto.

"Ending U.S. support will put even more pressure on Saudi Arabia and the UAE to change their tactics and finally negotiate an end to the war," Martin concluded. "Now that the new Senate has passed the resolution, the House needs to pass the same clean version of the resolution to finally send it to the president’s desk."