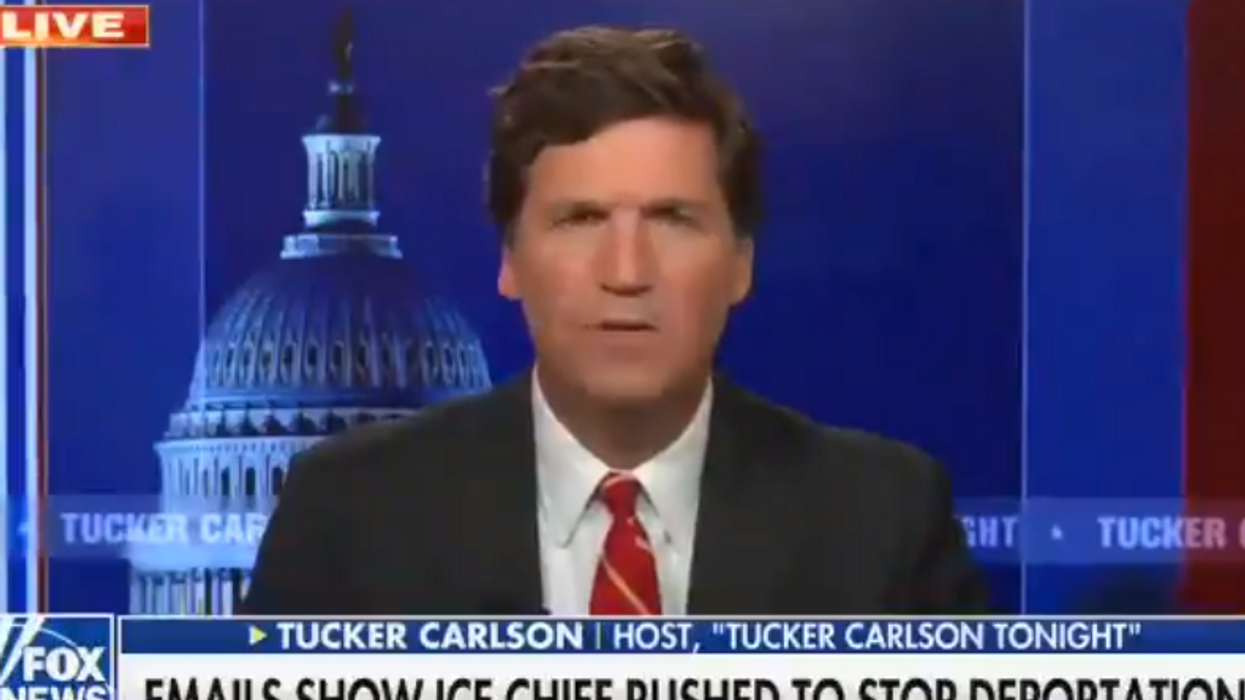 Fox News' Tucker Carlson is facing backlash for his latest attempt to use the Nazi-inspired "replacement theory" to accuse Democratic lawmakers of importing violent criminals into the country for political gain.

On Wednesday, August 11, Carlson appeared on "Fox & Friends" where he spoke with the panel of hosts and shared details about the so-called "scandal involving the border."

Carlson chimed in saying, "I mean, you know what this tells you honestly? What's happening at the border is not a crisis. A crisis is a flood in Bangladesh, it's an act of God. This is an intentional act."

"This is the administration bringing felons, violent criminals into our country on purpose," Carlson claimed. "Why would you do something like that? Only to destroy it. I mean, there's no other explanation for this. It's not an act of compassion. It's an act of hostility against the United States in order to change it forever. I think this is the greatest scandal of my lifetime, what's happening on the border right now."

Carlson went on to claim that Democrats have a "strategy" that includes importing "violent criminals" to increase their voter roll.

"Well, the strategy is to change the demographics of the country. When you say that, they have a heart attack and call you names, but they say it out loud. I mean, they say it on the floor of the Senate, Dick Durbin did two weeks ago. This country is changing in a way that benefits the Democratic party. More Democratic voters. There's no other upside in this policy."

He added, "By the way, it doesn't help the people coming from around the world. There's a humanitarian disaster unfolding thanks to the Biden administration. The only beneficiaries are the people who run the Democratic party and this is an effort to change the country, and we should be honest about it and not be bullied into silence as they take our country away and import violent criminals, what?"

Carlson's latest controversial conspiracy theory quickly caught the attention of Twitter users who wasted no time weighing in with their opinions and reactions. Many quickly saw the correlation between Carlson's remarks and the Nazi "replacement theory." Some even criticized Fox News for failing to address Carlson amid his push to promote dangerous rhetoric and propaganda.

Fox News has normalized rhetoric that was the stuff of Nazi message boards a decade ago https://t.co/CTeENkPzcc
— Aaron Rupar (@Aaron Rupar) 1628691305.0

@mmfa That's exactly what the Native Americans began to think about the Europeans coming to America.
— Beverly Collins (@Beverly Collins) 1628697649.0

The primetime host's remarks come just months after his previous replacement theory claims back in May. At the time, Carlson claimed Democratic lawmakers were "importing a brand new electorate" that consists of "Third World" immigrants so they can "dilute" the United States' political power.

"I know that the left and all the little gatekeepers on Twitter become literally hysterical if you use the term 'replacement,' if you suggest that the Democratic Party is trying to replace the current electorate — the voters now casting ballots — with new people, more obedient voters from the Third World," Carlson claimed.