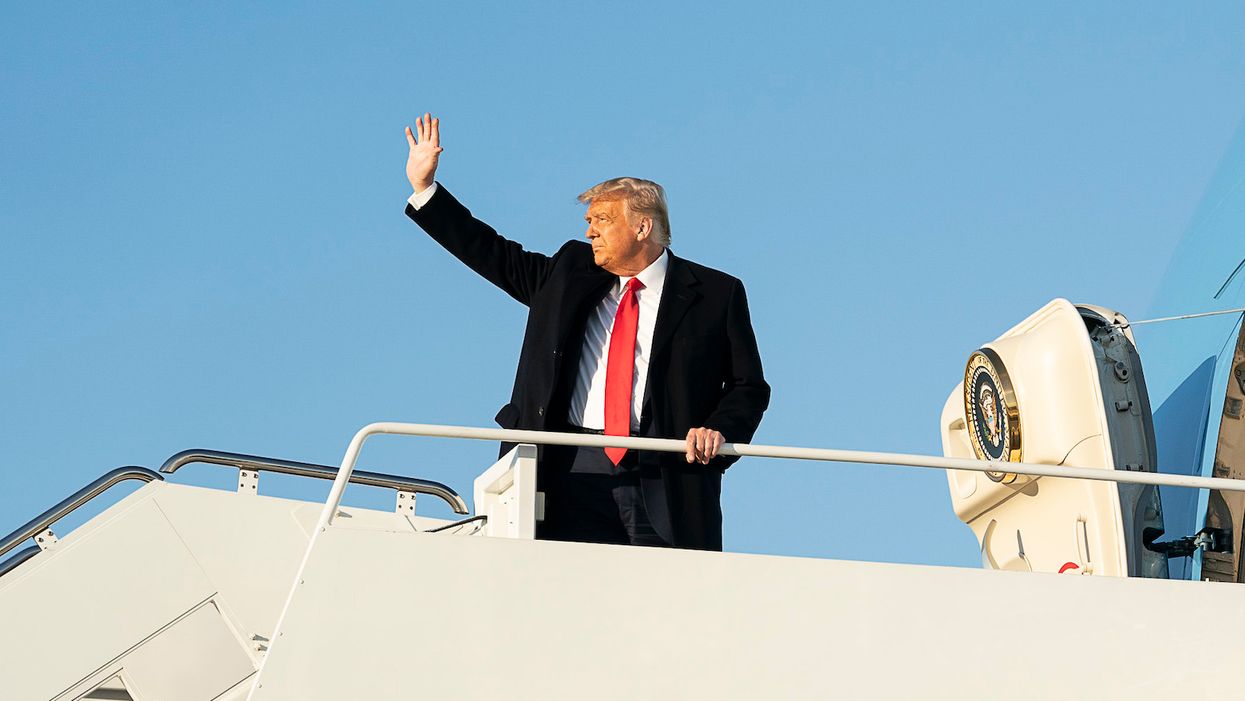 Donald Trump has more than fulfilled one campaign promise: Throughout his presidency, he has been the disruptive force he said he would be in 2016.

For the most part, we focus on the ways that his chaotic presidency has undermined American democracy by running roughshod over the norms that made it work, more or less, for over 200 years. He's politicized the Department of Justice and other federal agencies, violated the Emoluments Clause and The Hatch Act with impunity and showed unprecedented contempt for Congressional oversight of the executive branch.

One plausible result is that Trump's authoritarianism--and white nationalism--will be embraced by his entire party, the remaining moderates will flee and the GOP will become even more reactionary. With a judiciary packed with partisan judges and a media apparatus providing their base an endless supply of bogeymen to battle, Republicans could abandon even the pretense of competing in a democracy. The left might react in kind, and the country could be ripped apart. It's a dark possibility--one of several.

But there are other, more hopeful outcomes that might follow the kind of shock to the political system that we've seen over the past four years. Here are a few potential unintended consequences of Trump's rise to power that might be beneficial over the long run.

Voting is a habit

In 2018, half of all eligible voters voted in the midterms. That may not sound like much, but it was the highest turnout rate for a non-presidential election since 1914. Turnout also surged for the off-year elections in 2017 and 2019, and that surge favored Democrats.

We are presently on pace to shatter the modern record for turnout in a presidential election, surpassing the 64 percent of eligible voters who cast ballots in 1960.

According to New York Times/ Siena College polling, huge numbers of people who didn't vote in 2016 are voting this year in key swing states, and they're leaning toward Biden by significant margins. (The numbers are such that they aren't just young people coming of voting age.)

Perhaps if Biden wins, these erstwhile non-voters will once again stay home. But studies show that voting is habit-forming--participating in one election increases one's likelihood of doing so in subsequent contests. And win or lose, Trump and his movement aren't going anywhere.

Research has also found that non-voters tended to skew younger and more diverse than the voting population, and hold more left-leaning views about the economy and the role of government.

If, in the future, turnout of over 60 percent becomes the norm rather than the exception, it could very well transform our politics.

The conventional wisdom about how politics works matters a lot.

After achieving almost presidential-year turnout in the 2018 midterms despite relentless GOP efforts to suppress the vote in communities that skew Democratic, some analysts looked at people of color braving hours-long line to vote and concluded that blatant voter suppression might result in a backlash by pissing off voters and motivating them to jump through whatever hoops are necessary to cast their ballots.

That was the case during the Wisconsin primaries, when Republicans went all the way to the Supreme Court to block mail-in balloting during a pandemic, and were rewarded with massive Democratic turnout that won them a state Supreme Court seat.

This year, GOP efforts to suppress the vote are even more brazen. If the conventional wisdom coalesces around the idea that trying to win by keeping the other side from participating leads them to turn out in force, that would be a powerful incentive to at least moderate those efforts in the future.

A new coalition against minority rule?

The Democratic coalition has long been divided by differences over policy and strategy. Trump has been a unifying force in this regard, and at present, all of the factions of the broad left are working toward a common goal of defeating him and his movement.

That won't last long past the election; soon, we will once again be engaged in heated debates over policy and messaging and all the rest.

But thanks to Trump, Mitch McConnell and Senate Republicans, there are some early signs of an emerging coalition of progressives and moderates pushing to kill the filibuster, expand the courts and possibly add new states to the union.

As Ezra Klein noted on Twitter last week, "I cannot emphasize enough how much McConnell's actions on Garland and Barrett have radicalized Democratic senators."

At Vox, he wrote:

Over the past few months, I've been talking to Senate Democrats about the future of the filibuster. To my surprise, something had cracked in the ice. Moderate members who used to dismiss calls to abolish the filibuster were taking them seriously, predicting or even advocating its fall. And the reason they gave me was always the same: Mitch McConnell...

Joe Biden is an instinctive institutionalist, but a coalition of progressives and moderates pushing to retaliate for McConnell's overreach would have a very powerful argument.

Biden also lived through relentless Republican obstruction while the Obama administration was trying to manage a crisis that was less severe than that which we face today. Circumstances matter, and addressing the pandemic and the economic crash that it caused is going to be difficult, if not impossible, without heavy government intervention and significant public spending. If Democrats do retake the Senate, Republicans would be unable to get on board without sparking a revolt among their base. That would leave Democrats with the choice of using some hardball tactics or doing nothing for a country facing historic crises. The stars could be aligning for a feistier and bolder Democratic Party to emerge from the Trump era.

But at a minimum, the right's relentless efforts to suppress the vote and disenfranchise voters both in the midterms and during this election has put a new Voting Rights Act front and center on the Democratic agenda.

Contending with entrenched minority rule can take different forms, but I want to focus on one significant change that seems certain.

For several decades, conservatives have fought an asymmetric war for the courts. It has long been a voting issue for the Republican base while rank-and-file Democrats considered it a second-tier issue. Conservative foundations have poured hundreds of millions of dollars into shaping the courts--funding advocacy groups and journals and academic chairs.

And while the right has long assailed the fundamental legitimacy of "liberal activist judges"--"robed tyrants" thwarting the will of the people--the left tended to criticize individual decisions like Citizens United or Shelby County while accepting the courts' authority in broad terms.

Refusing to give Merrick Garland so much as a hearing, appointing the very partisan Brett Kavanaugh--whose temperament is anything but judicial--and then ramming Amy Coney Barrett's nomination while votes were already being counted would probably be enough to change that. The prospect of what a 6-3 Court might actually do, Republicans' constant gloating over their wins and the relentless efforts by Republican judges to restrict votes during this election make it a certainty.

How that will play out over time remains to be seen. But both parties taking the courts seriously is a sea-change in American politics.

Trump and his supporters are delusional to believe that he's going to get a significant share of the Black vote. But when the exit polls are released we may discover that he has made some inroads with Blacks and Latinos.

Meanwhile, he has opened up a yawning educational gap among white voters. According to data from the Cooperative Election Study--a sample of over 50,000 likely voters, whites with a college degree favor Biden 58-36, while those without one back Trump 57-36. This has already reshaped the electoral battlefield, with Republicans getting crushed among college-educated white voters in the 'burbs.

Those shifts will likely endure. But the share of the white electorate with college degrees is steadily increasing, while non-college whites represent a demographic that's in decline. Republicans' shrinking base could potentially force them to appeal to a broader swath of the electorate, which would be healthy for our democracy over the long run.