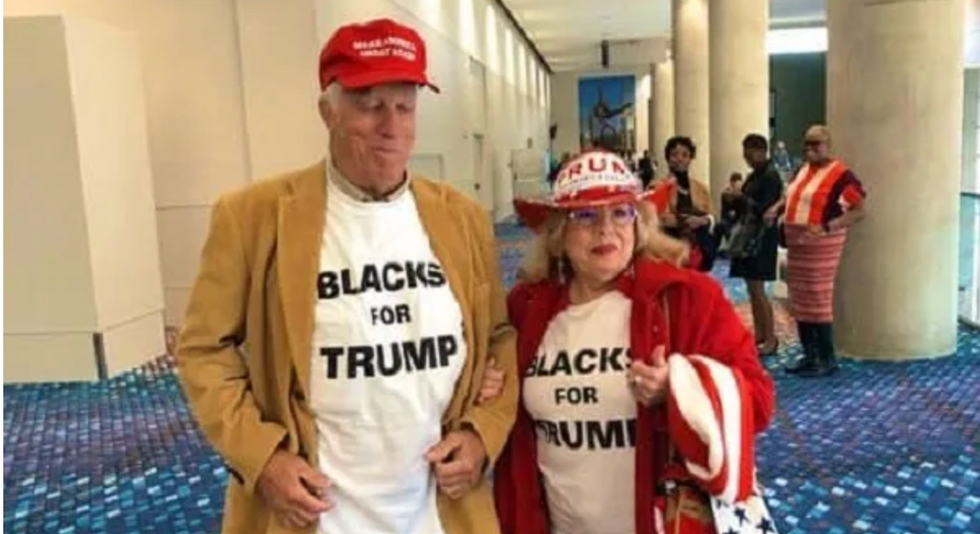 On Monday, White House Press Secretary Kayleigh McEnany offered one of the greatest self-owns in recent memory. Asked about Utah Sen. Mitt Romney marching with Black Lives Matter protesters, McEnany, who never answers questions directly, bragged about the 8 percent of African-American votes Trump won in 2016, and claimed that Romney had only won the support of 2 percent of blacks in 2012. Of course, this was a lie--Romney's 6 percent was well within the margin of error of Trump's 8 percent four years later. But it was her lack of self-awareness in touting such marginal support from any group of Americans that stood out. Democrats have consistently won 20 percent or more among their worst demographic, white Evangelical Christians.

But the Trump team, deeply ensconced in the comforting bubble of conservative media, isn't content to hold onto that tiny slice of black voters. According to Politico, the Trump campaign has "built a comprehensive 2020 reelection plan around winning a slice of black and Hispanic voters." Team Trump is going after the black vote in a big way.

In February, Trump's senior advisor Jared Kushner announced that the campaign would launch "15 Black Voices for Trump community centers in major cities in Florida, Georgia, Michigan, Pennsylvania, Wisconsin and North Carolina" in an effort to "capitalize on a chaotic Democratic primary and gain momentum with a group that was once mostly out of reach to Republican candidates," according to CNN.  (Allies of Trump also held events where they handed out cash to potential black voters, who then said nice things about the president*. The handouts "rais[ed] ethical concerns," according to NPR.)

"Last time it was, 'What the hell do you have to lose?'," said Kushner. "Now you show them what they've gained from President Trump and what more they can gain if they get four more years of President Trump. You're never going to get the votes you don't ask for."

Kushner's spin was in keeping with Trump's habitual claims that he's done more for the African-American community than any other president in history, a ludicrous four-Pinocchio assertion. Trump reportedly believes that signing the First Step Act--a modest set of criminal justice reforms pared down significantly from several more comprehensive packages which were shot down by Republicans during the Obama years--would give him an in with the African-American community.

This farcical push for a group of voters who think Trump is a racist and disapprove of his job performance by overwhelming margins is indicative of a campaign that's high on its own supply. Late last year, a few polls came out with unlikely findings about Trump's ostensible support among non-white voters. One was by the very Republican-leaning polling firm Rasmussen reports, which should always be taken with a big grain of salt, but a CNN poll found Trump winning 26 percent of black voters and an Emerson University poll pegged that number at an eye-opening 35 percent.

Of course, anyone who knows anything about politics understands that these polls were plagued by small subsamples of black voters and that the most explicitly racist president in a century is going to end up a lot closer to John McCain's 4 percent among African-Americans in 2008 than the 11 percent that George W. Bush won in 2004. Nevertheless, the conservative media were ecstatic about the findings and Trump and his advisors appear to have embraced those dubious numbers. (It's reminiscent of Trump constantly claiming that he enjoys the support of 96 percent of Republicans, which was the result of a single August, 2019 poll from Zogby Analytics, which Nate Silver once called "the worst pollster in the world.")

As for that big outreach effort announced in February, Politico reports that "little has come of it." But undeterred, the regime continues to search for a "strategy to aid voters of color ahead of November."

And now, the White House is reportedly tasking explicit white supremacist Stephen Miller to write a speech on race relations, which Trump will deliver in the halting, stilted style he uses when he can't speak off the cuff and has to stick to what's on the teleprompter. We're sure that will go well.

All of this highlights the degree to which the conservative press is a double-edged sword for this campaign. On the one hand, they keep Trump's base in line by creating an alternative reality in which Trump is strong and competent and nobody is laughing at him, but the problem is that he and his staff consume the same media and as a result are completely disconnected from reality.