'I'm not going to let you do this': CNN anchor shuts down Republican's attempt to dodge Trump's lies 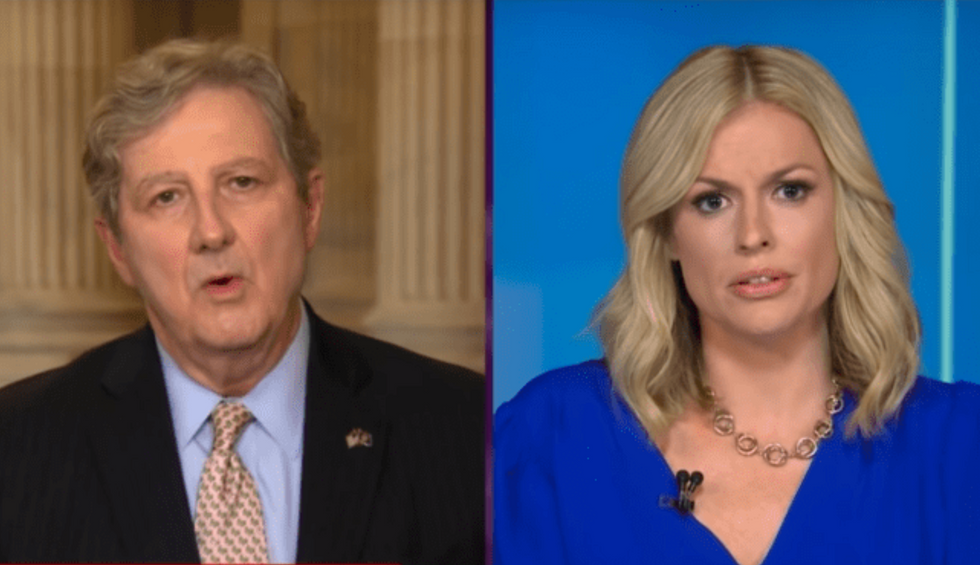 If you haven’t heard, this Donald Trump guy doesn’t seem to be a particularly good guy. He doesn’t seem to be a particularly competent guy. Frankly, he seems like he’s bad for our country. Hold on while I set fire to my possessions for fear I catch and spread the very real United States coronavirus pandemic. As former journalist turned celebrity political author Bob Woodward releases excerpts and audio recordings of President Trump to promote Woodward’s new book, the public is once again being treated to information we already knew, just coming out of the pedestrian mouth of the Donald himself.

Republican Sen. John Kennedy of Louisiana has made a name for himself as a slow-talking craven insect of a politician. Whether he is defending the Confederacy, or promote pro-Putin conspiracy theories on the Sunday shows, or blaming China and Mardi Gras drinking for the spread of the coronavirus in Louisiana, Sen. Kennedy has shown himself to not only be a foolish mind, but also a truly shameless one.

Kennedy came on CNN to talk with anchor Pamela Brown about the day’s news. Brown’s opening question to Kennedy was whether or not Trump’s admission that he “downplayed” the threat of the virus—literally calling it the “new Democratic hoax”—was “acceptable to you?” Kennedy gave a nice via satellite pause before beginning on-brand dumb: “You’re talking about the Woodward book?” Oh, man. Wow. It is literally the reason he is on the show, to be asked his thoughts on a Republican leader who has been recorded admitting to misleading the public about the then-impending public health crisis. A crisis that has claimed hundreds of thousands of American lives, and will potentially take hundreds of thousands more American lives.

CNN’s Brown replies, “Yes, the Woodward book,” to which Kennedy begins his slow decent into an enormous pile of bull’s droppings. “I can only give you my opinion, Pamela.” This, Mr. Kennedy, may be the only true thing you say this week. "These gotcha books don’t really interest me that much.”

“Gotcha books.” That’s the spin. Brown, like anyone listening, is sort of surprised at how baldfaced this bananas cuckoo misinformation is, cutting Kennedy off to remind him that Woodward’s book, and Trump’s admission, are accompanied by audio recordings, where you can distinctly hear the heavy-breathing charlatan in his own words.

SEN. JOHN KENNEDY: These gotcha books don’t really interest me that much. There’ll be a new one out tomorrow—

No, I’m not repeating myself. Sen. Kennedy’s useless talking point is predicated on this opening sentence. He’s just restarting the tiny computer that is his mind.

BROWN:—But this is different. He did 18 interviews with Bob Woodward.

BROWN: So you … he’s recorded. You hear his voice, and you’re seeing that and contrasting that with what you’re seeing he says to the public. Wouldn’t that be something of some interest to you as a United States senator?

It’s unbelievable to watch this. My kindergarten-age daughter gets more sophisticated complex sentences of instruction during her virtual classes than Kennedy seems to require here. You want to know what Kennedy’s response to this is? You won’t believe it. Seriously. Hold on while I cut and paste: “Let me answer you again. These gotcha books don’t really interest me. There will be a new one out tomorrow.”

[This is me with my eyes comically wide open, blinking very deliberately]

Brown lets Kennedy ramble on about whatever and then tells him she let him say whatever the hell he was saying before asking him, once again, whether or not he had any response to the admission—recorded—by the president of the United States that he purposefully misinformed the public about how transmittable the COVID-19 virus was. This time she asks him by reminding him that this was information that his own constituents could have used to make better decisions.

KENNEDY: Well, No. 1, Pam, I’m not going to repeat what I just said, but I can only tell you what my personal experience has been.

What? What does that even mean?

KENNEDY: No. 2, let me just say a word about this infatuation in Washington with who said what to whom …

It is here that Brown has finally had enough, interrupting Kennedy: “No, Senator, I’m sorry. I’m not going to let you do this. I understand, there’s so much politics right now, we are two months away from an election, but this is life and death. You have had 5,000 people who have died in Louisiana from coronavirus. Republicans are reluctant, as you are now, to ever criticize this president, but as a human being, how can you be okay with this?”

Kennedy, rightly chastised, retreats to the classic: “If I could finish ...” and then, I shit you not, goes into a word salad where he explains that he is “existential about Washington”—he’s “Sartrean” about it. Yup, he namechecked Jean-Paul Sartre. His point seems to be that you should judge people not “by what they say” but “by what they do.” He proceeds to say his personal experience is that this administration has been super awesome about the (let me check my updated numbers) 191,000 plus dead. A side note here: The moment Kennedy kicks into existential overdrive, his eyelids seem to begin having their own crisis of existence, blinking at about a million miles a minute.

Brown, trying to be diplomatic and not just yell “Are you fucking kidding me?”, connects the dots of the senator’s logic for him. If it’s about actions rather than words, how come Trump—who knew in February about how spreadable and dangerous the virus was—held no fewer than six crowded rallies, downplaying the virus at each and every one of them? “Those were actions he took. And he had the knowledge. That’s okay with you?”

Yeah. Is that okay with you, senator?

KENNEDY: Well, you’re going to have to talk with the president and Mr. Woodward—

BROWN:—But what do you think?

Brown is as frustrated as you are and calls Kennedy’s bluff. She plays, live on-air, the audio of Trump’s admission to Woodward. She then reiterates what Kennedy just heard, because it’s hard to know what is banging about in that old silly-billy head of Kennedy’s.

KENNEDY: Well, once again Pamela, I haven’t read the transcript, I don’t know the context.

Brown tried, but it’s hard to fix a corrupt and broken person like Kennedy.

I suggest wrapping your screen in bubble wrap before watching the below video so that you don’t break it when you try and throw it through a window or wall.