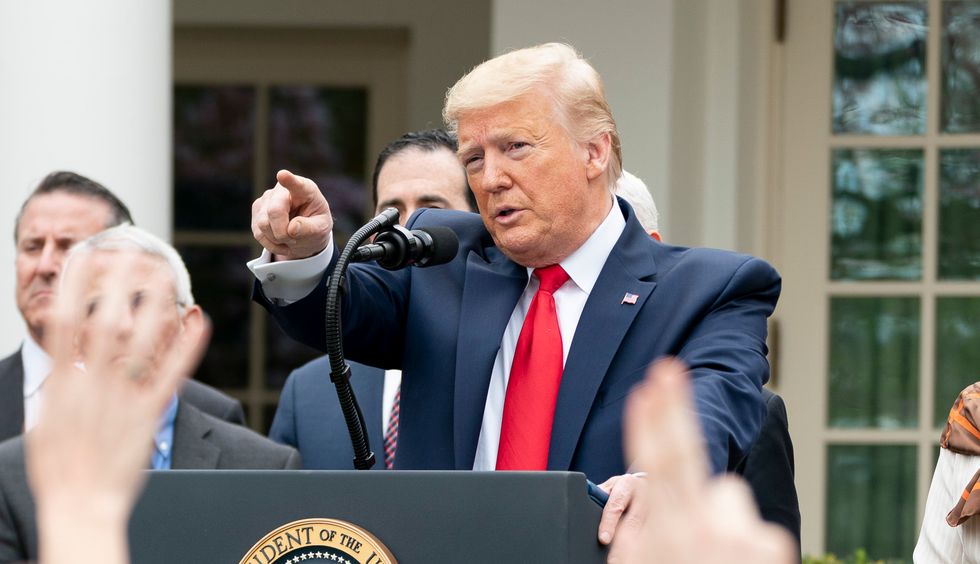 President Donald J. Trump points to a reporter to ask a question after announcing a national emergency to further combat the Coronavirus outbreak, at a news conference Friday, March 13, 2020, in the Rose Garden of the White House. (Official White House Photo by Shealah Craighead)
Jake Johnson
and
Common Dreams
March 31, 2020 Video

In a conference call with governors on Monday, President Donald Trump dismissed concerns about shortages of coronavirus testing equipment in states across the nation, claiming he "hasn't heard about testing being a problem" despite loud warnings from local officials and near-constant reporting on the issue by media outlets.

Trump's remarks came after Montana Gov. Steve Bullock said on the call that his state doesn't "have enough supplies to even do the testing" for coronavirus, which has officially infected more than 163,000 people in the United States.

"Literally we are one day away, if we don't get test kits from the CDC, that we wouldn't be able to do testing in Montana," said Bullock.

Listen to the audio clip:

Washington Gov. Jay Inslee told the New York Times that he was stunned by the president's remarks.

"It would be shocking to me that... anyone who has had access to any newspaper, radio, social networks, or any other communication would not be knowledgeable about the need for test kits," Inslee said, noting his state is in "dire" need of equipment. "I can be assured that the White House knows very well about this desperate need for test kits."

Trump has repeatedly ignored or brushed aside warnings from frontline workers and local officials about shortages of of testing kits and other medical equipment as the coronavirus continues to spread rapidly across the United States.

During a press briefing Monday evening, Trump lashed out at PBS reporter Yamiche Alcindor after she pressed the president on why, despite his frequent claims to the contrary, the United States continues to lag behind other major nations in coronavirus testing per capita.

"You should be saying congratulations instead of asking a really snarky question," Trump said.