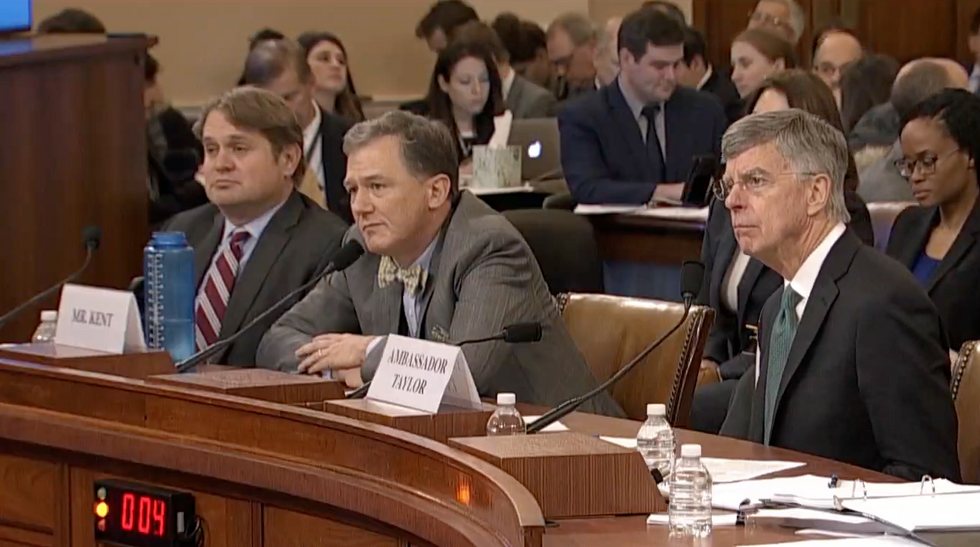 On the first day of the public impeachment hearings into President Donald Trump's conduct,  Deputy Assistant Secretary of State George Kent and U.S. Ambassador Bill Taylor provided powerful and persuasive testimony about the administration's scheme to pressure Ukraine into launching an investigation of former Vice President Joe Biden and the Democratic National Committee.

The hearing began with 45 minutes of questioning from a lawyer for the Democrats, which laid out the evidence for the plot — and the official's objections to how it was carried out — in rigorous detail. It was the first public viewing of the explosive scheme that has been uncovered through the weeks of the closed-door investigations, making public and cohesive the narrative that has dripped out from the House Intelligence Committee.

Republicans tried to beat back the tide of evidence that the hearings unleashed, but they only managed to nip at the edges of the story while leaving the central narrative intact. They focused obsessively on Trump's July 25 phone call with Ukraine — which was damning enough on its own — taking it out of the context of the broader scheme pushed by the State Department and the president's personal lawyer Rudy Giuliani. And when the GOP counsel questioned the witnesses, he zeroed in on the conduct of the Bidens and the Ukrainian company Burisma — despite it having no bearing on the accusations against the president.

In a tweet, Bloomberg News journalist Sahil Kapur reported that at least one Republican operative revealed they were shaken by the proceedings in colorful language.

"Not from me: but this is a massive fucking shitshow," the GOP operative told Kapur. "No one wants to be here."

It's little surprise that they would feel this way. Republicans in the committee appeared plainly contemptuous of the proceedings, and they had no ground to challenge the Democrats' factual narrative.