Sanctions will have a 'devastating effect on Russia’s economy': analysis

The Biden administration, in extraordinary and rapid cooperation with allies over a period of three days, has doubled down on its vow to impose “severe sanctions” against Russia for its military aggression against Ukraine.

This article was authored by David Cortwright and George A. Lopez.

On Feb. 26, 2022, the U.S. and Europe agreed to cut off some Russian banks from the SWIFT messaging system, which is used to make trillions of dollars’ worth of transactions every day, an option so devastating it has been called “the nuclear option” of sanctioning. They also vowed to prevent Russia from accessing some of its foreign reserves, making it harder to offset the effects of the sanctions.

As experts on the effectiveness of sanctions, we believe the combination of these measures comprises an unprecedented global attack on a national economy – in this case, Russia’s – the negative impact of which will increase by the hour.

In their Feb. 24 sanctions package, the U.S., its European allies, and other supportive countries froze the assets of Russia’s largest banks and several of the country’s richest and most powerful oligarchs and imposed other financial sanctions on them.

These measures cover nearly 80% of all Russian financial assets, which the U.S. Treasury Department called the “core infrastructure of the Russian financial system,” blocking Sberbank, VTB Bank, and other Russian banks from accessing credit and currency markets and impeding the ability of state-owned and private entities to raise capital.

By imposing steep costs on these financial firms as well as on Putin’s main allies, such as Aleksandr Bortnikov, head of Russia’s Federal Security Service, and his son, Denis Bortnikov, who chairs VTB’s board, the sanctions should undermine the investment and development that drives the Russian economy.

The sanctions also include export controls that prohibit companies and countries from exporting technological equipment to Russia with components that use U.S.-built or U.S.-designed microchips.

Since the U.S. continues to dominate in making the kinds of high-end semiconductors necessary for advanced technologies, this provides important leverage. The export controls target Russia’s defense, aerospace, and maritime sectors and will cut off Russia’s access to vital technology, which will likely lead to the atrophy of key sectors of its industrial base.

While Russia imports most of its semiconductors from China, these are the type of low-end chips used to run washing machines, for example – not to operate a guided missile. Russia relies on U.S. semiconductor components for many of its most important technological applications.

Similar export controls on semiconductor products are being imposed by many others, including Europe, Japan, and Taiwan.

And after intense pressure from Ukrainian President Volodymyr Zelenskyy and others, the U.S. and European Union agreed on Feb. 26 to cut off some Russian banks from SWIFT, which stands for the Society for Worldwide Interbank Financial Telecommunication and connects thousands of financial institutions around the world. This is especially notable because some countries, in particular Germany and Italy, had previously been opposed to this step.

When Iran was first cut off from SWIFT in 2012, it lost half of its oil export revenues and 30% of its foreign trade.

The U.S. and allies also announced on Feb. 26 that they would block the Russian central bank’s access to some of its over US$600 billion in foreign currency reserves. Elina Ribakova, the deputy chief economist for the Institute of International Finance, said this measure would have a dramatic effect on Russia’s economy and banking system and lead to “massive bank runs,” a selloff of rubles, and “possibly a full-on collapse of Russia’s financial system.”

Altogether, these sanctions – if sustained – should have a devastating effect on Russia’s economy, as well as curtail its strategic capabilities by hurting the powerful energy sector and military-industrial companies, which are bulwarks of Putin’s regime. 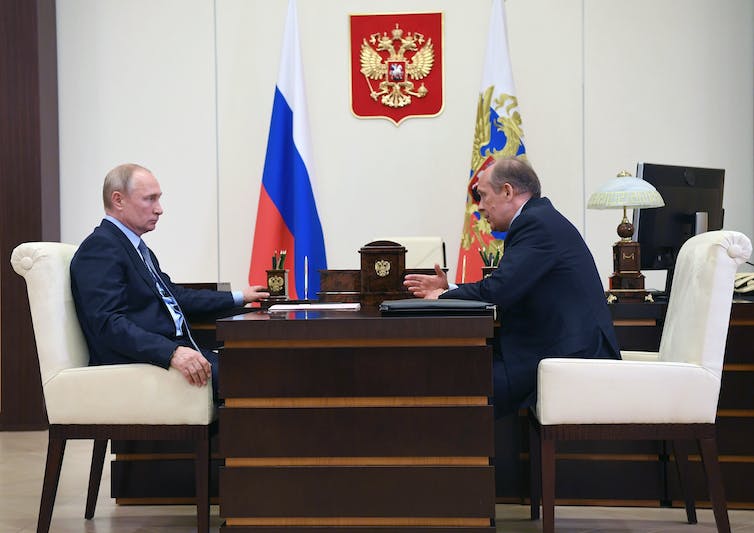 What makes sanctions stick and sting

We’ve studied the effectiveness of past sanctions both in terms of their economic impact and whether they attain their political objectives.

We’ve found two conditions are necessary for sanctions to be effective, at least when it comes to their economic impact: They must be multilateral, meaning they involve a broad coalition of governments, and they must be implemented by countries that have extensive commercial relations with the targeted regime.

Furthermore, the countries with deep ties to the target must accept the risks and costs that result from their actions.

That’s why the participation of a growing number of like-minded nations – including the U.K., Germany, France, and other European states that have a much higher volume of trade with Russia than does the United States – is so crucial in making these sanctions succeed.

This unity and collective economic clout explain why the Russian stock market went into a nosedive and the ruble fell to a record low against the dollar after Russia launched its invasion and the new sanctions emerged. As a result, Russia’s billionaires lost an estimated $71 billion on Feb. 24, and Standard & Poor’s and Fitch Ratings slashed the country’s credit rating to “junk” status.

Because the sanctions are multilateral in design and being implemented in close coordination with allies in Europe, Japan, Australia, and other countries around the world, our research suggests they will have a significant impact on Russia. Previous estimates have suggested aggressive sanctions like the ones being unleashed now could shrink Russia’s annual gross domestic product by 3% to 5% or more. 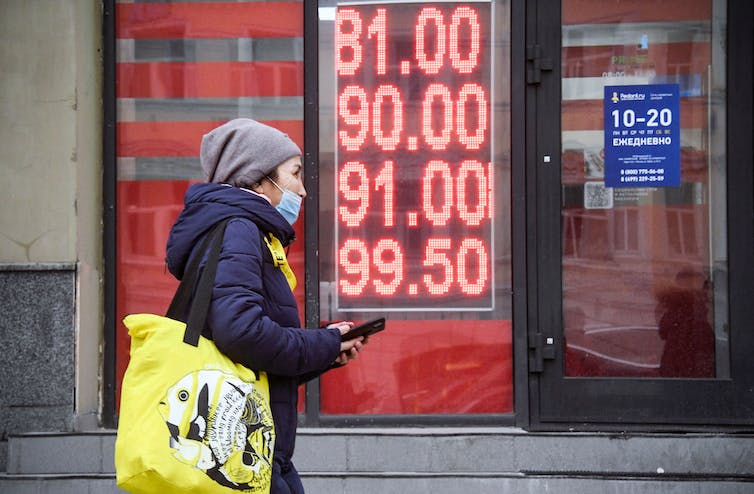 The ruble crashed to a record low after Russia invaded Ukraine and the West announced new sanctions. Alexander Nemenov/AFP via Getty Images)

Bearing the costs of imposing sanctions

Discussions are continuing and pressure may build to take other, more severe measures in response to the Russian assault, especially if its military is deemed to be guilty of committing war crimes.

Other measures on the table include more direct product-based sanctions of oil, natural gas, and aluminum. But they also would have more immediate negative consequences for Europe, another test of endurance for the economic battle with Russia.

In this case, the impact of the very strong sanctions levied is hurting Russia now and will increase substantially in the coming months. As long as the countries imposing the sanctions, as well as the companies and citizens who will also bear some of the costs, are willing to accept them, they will likely succeed in punishing Putin for his aggression against Ukraine.