'So, now it's serious?': Twitter users give Hannity a history lesson after he attempts to blame Biden for COVID surge 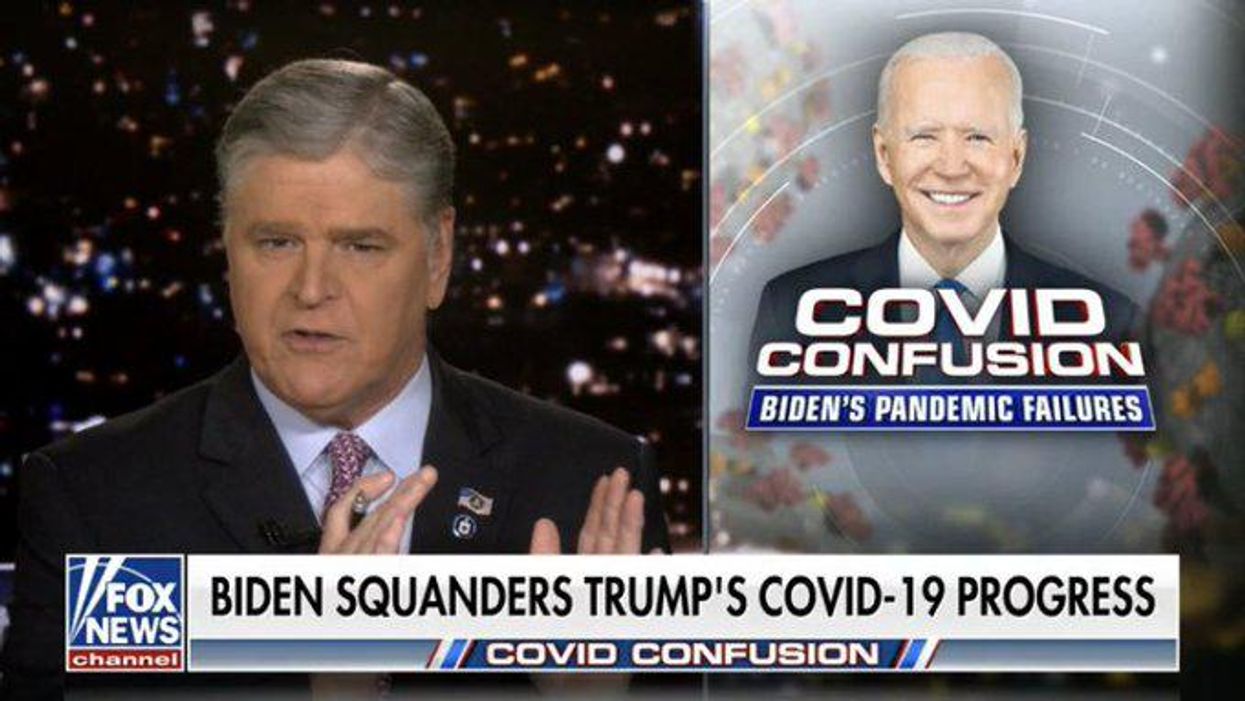 Fox News host Sean Hannity sparked a Twitter firestorm when he attempted to blame President Joe Biden for the latest public health crisis due to the rapidly spreading Delta variant of COVID.

During his segment on Friday, August 6, Hannity appeared to flip the script about all that transpired last year. With a screen prompt that read, "Biden squanders Trump's COVID-19 progress," Hannity accused Biden and Vice President Kamala Harris of pushing anti-vaccination conspiracy theories for political gain.

"Let's start with the vaccines. Last year while President Trump was working with scientists and major pharmaceutical companies to cut all the red tape and expedite safe effective vaccines, Joe Biden and Kamala Harris, their friends in the media mob, their press secretaries, well they were busy sewing doubt and pushing anti-vax, anti-trump conspiracy theories, of course, we know why, all for political gain."

At one point, Hannity claimed the president went back on his word. "Remember Biden then declared a new policy: vax or mask, remember that?" Hannity asked. "Now it's vax and mask, and vaccine mandates and mask mandates and other draconian new restrictions, and the possibility of yet more shutdowns."

Hannity also slammed the president as he accused him of pushing Americans to take "extraordinary measures" to combat the spread of COVID.

"We really can't trust that derelict shell of a president Joe Biden. We can't trust his administration. We can't trust the Democratic party and the media mob, he lives in their protection program," he said. "They care about politics and power clearly more than our health and our safety. They are unscientific, unprincipled, ever-changing, autocratic policies, yeah it's leading this country straight into a massive new health crisis of their making."

Almost immediately after the controversial clip started making its way around Twitter, users began weighing in to correct Hannity on his incorrect comparison of Trump and Biden. Offering Hannity a brief history lesson and timeline on the pandemic, Vox reporter Aaron Rupar tweeted, "There were 4,380 US Covid deaths on Trump's last day in office. There were 574 US deaths yesterday. Draw your own conclusions."

Another Twitter user noted how Hannity's tone and perspective of the pandemic have changed over the last several months. "So now it's serious? But the entire time shit was falling apart under trump...nothing?"