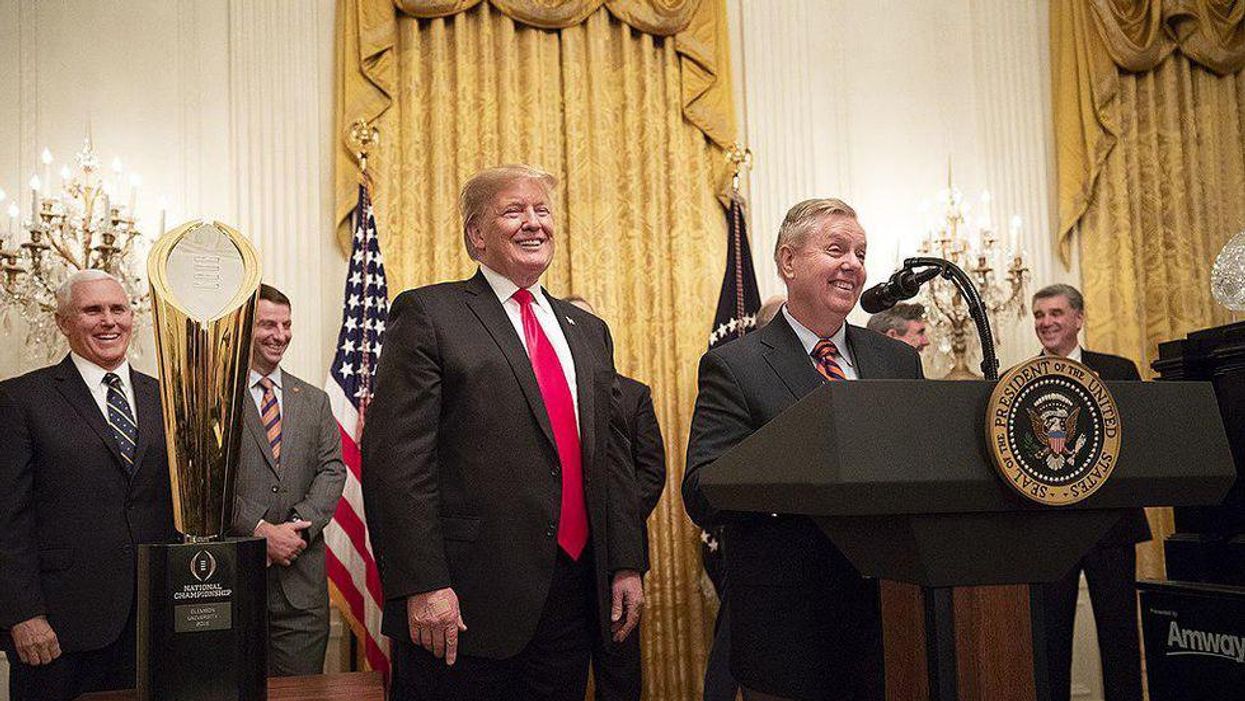 After a mob of Donald Trump supporters violently attacked the U.S. Capitol Building on January 6, Sen. Lindsey Graham of South Carolina briefly appeared to be frustrated with the outgoing president. But that frustration didn't last. Graham has been stridently pro-Trump during the Biden era, and the South Carolina Republican's devotion to Trumpism is the focus of a New York Times article by reporters Glenn Thrush, Jo Becker and Danny Hakim.

The article is headlined, "Tap Dancing With Trump: Lindsey Graham's Quest for Relevance." And according to the Times reporters, Graham obviously views Trumpism as his way to remain relevant in the Trumpified Republican Party of 2021.

Graham has been all over the place where Trump is concerned. During the 2016 presidential election, Graham railed against Trump without hesitation and slammed him as "a race-baiting, xenophobic bigot." But Graham totally flip flopped after Trump was sworn in as president — not unlike Sen. Ted Cruz of Texas — and became one of his most strident, in-your-face apologists on Capitol Hill.

And then, speaking on the Senate floor following the January 6 attack, a frustrated Graham declared, "Count me out. Enough is enough" — appearing to denounce the outgoing president. It didn't take long, though, before he was back to being a devoted Trump sycophant during Joe Biden's presidency and telling fellow Republicans that Trumpism is the future of the GOP whether they like it or not.

Thrush, Becker and Hakim explain, "For four years, Graham, a man who had once called Trump a race-baiting, xenophobic bigot,' exemplified the accommodations that so many Republicans made to the precedent-breaking president — only more vividly, volubly and candidly. But Graham's reaffirmed devotion has come to represent something more remarkable: his party's headlong march into the far reaches of Trumpism. That the senator is making regular Palm Beach, Florida pilgrimages as supplicant to an exiled former president who inspired the Capitol attack and continues to undermine democratic norms underscores how fully his party has departed from the traditional conservative ideologies of politicians like Mitt Romney, Liz Cheney and Graham's close friend John McCain."

Graham and the late Sen. McCain were close allies during the George W. Bush and Barack Obama years. But McCain, unlike Graham, never warmed up to Trumpism; the Arizona Republican, who died in 2018, detested Trump and wasn't shy about saying it. In fact, McCain's widow, Cindy McCain, infuriated many Republicans in Arizona when she endorsed Biden in the 2020 election.

"After Graham's election to the Senate in 2002, (Graham and McCain) became inseparable," the Times reporters recall. "They shared a vision for the Republican Party: inclusive, center-right, hawkish on foreign policy, more moderate on immigration and other domestic issues. But that ideal had long been fading when Graham joined McCain at his ranch in Sedona, Arizona, on Election Night 2016. Graham still believed Hillary Clinton would win in a romp, yet there he was, incredulously watching the returns come in for Trump, uttering profanities over and over and over."

According to Thrush, Becker and Hakim, Graham is drawn to Trump for the same reason he was drawn to McCain: a desire to be around the powerful. And after Trump's victory in 2016, he decided it would be politically expedient to ally himself with him rather than oppose him as he had been doing.

Now, in the Biden era, Graham continues to defend Trump against attacks from his critics. But as the Times reporters note, Trump is never satisfied with what his sycophants do for him.

"During his near-weekly golfing trips to Mar-a-Lago, (Graham) said, he is still trying to persuade Mr. Trump to 'take it down a notch,'" according to the Times reporters. "He remains convinced he can get him to play by the rules, and not the other way around."