Jim Jordan spoke with Trump more than once on Jan. 6 — urged him to call off the dogs: report 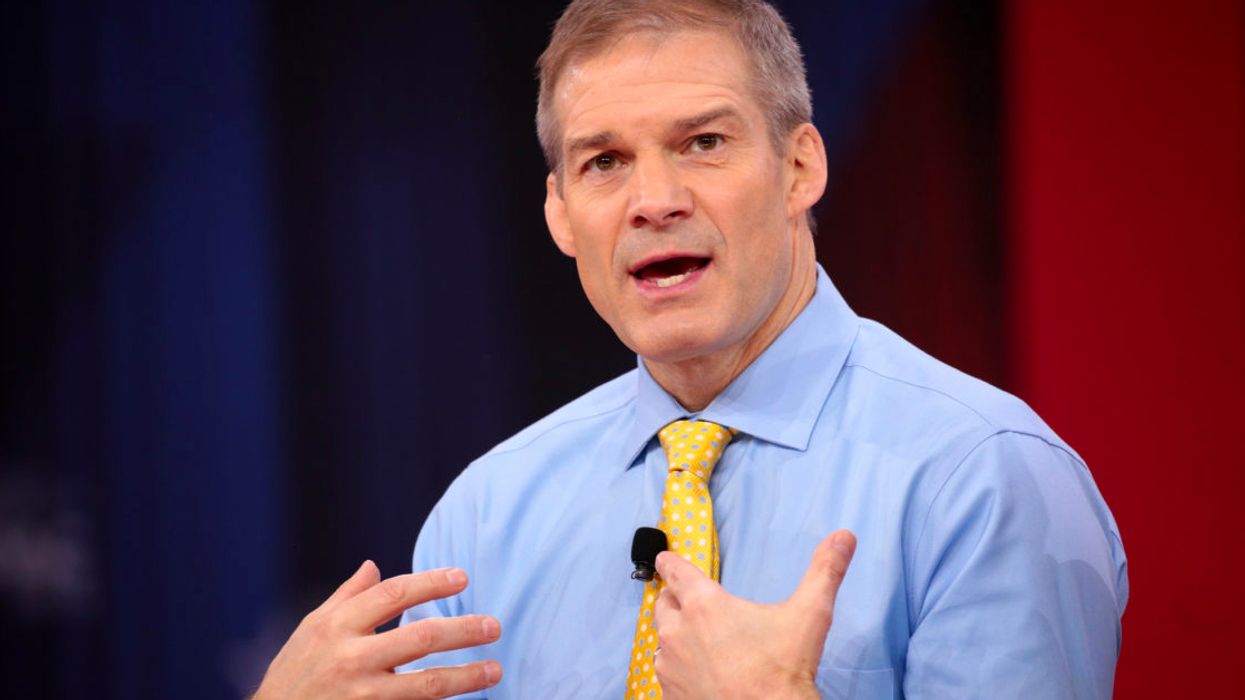 Judging by Jim Jordan's caginess whenever he's asked about his Jan. 6 conversations with Donald Trump, you'd think thousands of MAGAs had stormed the U.S. Capitol searching for college wrestlers to interview. But, no. This is simply how he comports himself when he's backed into a corner. The gendarmes may be closing in now, and he's looking for a tricked-out submarine to whisk him back to his volcano lair.

While Jordan has been more vocal than most in his defense of the mephitic amalgam of antediluvian skin blotches, pancake makeup, and ignominy who was still cosplaying as president in January, he also appears to understand that his contacts with Donald Trump on the day of the big guy's bumblefuck putsch are, at the very least, bad optics.

Clearly, that conversation left some blood in the water, and this reporter sniffed it out:

Nice. That first video was pretty bad, but the sequel made him sound like a tweaker trying to get through airport security with two bursting duffels full of Sudafed.

Well, now he's, shall we say, "altering" his story once again.

SCOOP: MORE THAN ONE JAN. 6 TRUMP-JORDAN CALL — We know that DONALD TRUMP and Rep. JIM JORDAN spoke once on the day of the Capitol riot, but the Ohio Republican has said he doesn't remember when their conversation took place. We have some new details that could help clear up that timeframe — including confirmation of at least one more phone conversation between Jordan and the then-president during the siege.
…
"Look, I definitely spoke to the president that day. I don't recall — I know it was more than once, I just don't recall the times," Jordan told our Olivia Beavers. He later said that "I'm sure" one of the Trump-involved calls took place in the safe room "because we were in that room forever." ... Jordan would not get into the specifics of what he discussed with the president, though he said that like everyone, he wanted the National Guard to get involved.
…
Jordan has previously disclosed that he spoke to Trump on Jan. 6, but not the existence of more than one call on the day — a rare piece of new information on the former president's moves during the riot at a time when House Republicans are loath to discuss such specifics. Trump-Jordan discussions are likely to be of keen interest to the Democrat-led select committee on Jan. 6, which is expected to soon seek phone records of members of Congress themselves in its probe.

Politico also noted that both Jordan and Rep. Matt Gaetz were on a call with Trump in which they "implored" our insurrectionist prez to "tell his supporters to stand down."

Hmm. Maybe these two need to testify to the House select committee investigating the events of Jan. 6. What d'ya think?

It's interesting, of course, that this revelation comes just days after this CNN story broke:

The House Select Committee investigating the January 6 Capitol riot is poised to send notices to various telecommunications companies requesting that they preserve the phone records of several people, including members of Congress, multiple sources tell CNN.

Preserving communications records is the first step in an investigatory process that could eventually lead to witness testimony. The notices are set to go out as soon as this week and provide the first window into the kinds of information the committee plans to pursue.

…
While it remains unclear which members' records the committee is interested in, several Republican lawmakers, including House Minority Leader Kevin McCarthy and GOP Rep. Jim Jordan, have acknowledged speaking to then-President Donald Trump by phone on January 6.

It's bound to get more uncomfortable for Ol' Gym as fall sets in and the committee members fix their icy stares on the congressional rogue's gallery of (alleged) coup enablers. The congressman may want to put on a jacket, because if he tells the truth under oath, he can expect an eternal MAGA freeze-out.