Elise Stefanik teams up with anti-Muslim extremist who praised Jan. 6 riot as a ‘civil rights protest’ 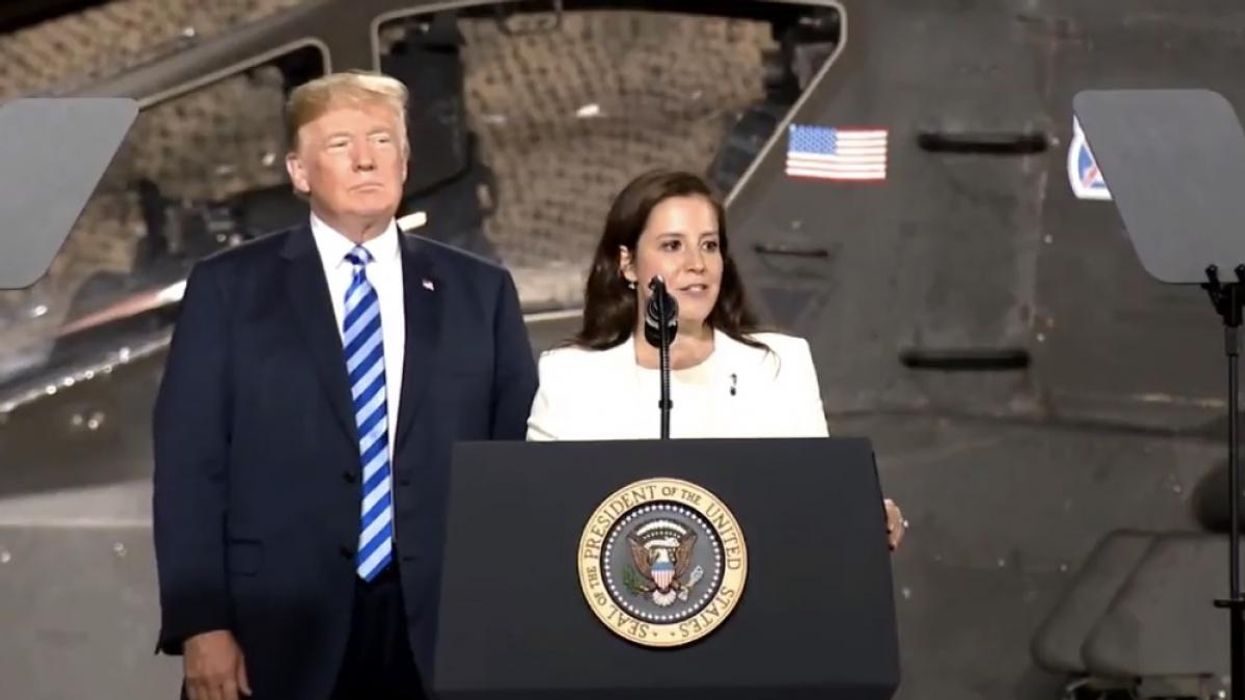 Rep. Elise Stefanik of New York State once distanced herself from extremists in the Republican Party; now, she openly and proudly embraces them. The latest example is far-right conspiracy theorist Scott Presler, who she will be joining at a MAGA rally on Wednesday, August 25 in Upstate New York. At 30, Presler has a long history of extremism, from defending Judge Roy Moore in Alabama to working with the anti-Islam hate group ACT For America to describing the January 6 insurrection as "the largest civil rights protest in American history."

But Stefanik, who replaced Rep. Liz Cheney of Wyoming as House Republican Conference chair earlier this year, is praising Presler as an "American patriot."

Discussing Stefanik's alliance with Presler in an article published by the Daily Beast on August 20, journalist Roger Sollenberger explains, "The joint appearance with Stefanik, slated for an August 25 rally and voter registration drive in Saratoga, New York, highlights the four-term Republican's ongoing pivot to an extremist MAGA base still enthralled with ex-President Donald Trump and the notion that the 2020 election was unfairly decided."

The Stefanik of 2021 is radically different from the Stefanik of 2014, 2015 and 2016. In those days, Stefanik was a conservative of the Susan Collins/Lisa Murkowski/Larry Hogan variety; she was right-of-center but not an extremist. And Stefanik, who was part of the moderate Tuesday Group, was a Trump critic in 2016. But Stefanik has since done a major flip-flop, and now, she doesn't think twice about debasing herself in service of the MAGA movement.

"Stefanik, who for years both campaigned and voted as a right-of-center Republican, has pivoted to fully embrace the Trump wing of her party," Sollenberger notes. "In January, she challenged the Electoral College results and later voted against a January 6 commission. Most recently, Stefanik drew backlash for pushing false narratives about the attempted insurrection."

The Stefanik of the past would have avoided someone like Presler, who was a strategist for ACT For America — which the Southern Poverty Law Center and the Anti-Defamation League have been highly critical of. SPLC has described ACT For America as a group that "pushes wild anti-Muslim conspiracy theories, denigrates American Muslims," and ADL has warned that ACT promotes "paranoia that vilifies the American Muslim community."

Sollenberger observes, "In his role at ACT, Presler took the lead in organizing a nationwide series of 'March Against Sharia' rallies in mid-2017. As the group's Facebook administrator, he oversaw what SPLC characterized as a 'plentiful' outpouring of 'racist and violent content,' collaborated with avowed neo-Nazi Billy Roper, and co-organized a rally with Patriot Prayer founder Joey Gibson in Portland, Oregon, which the city eventually canceled."

In 2017, Presler was a vigorous defender of Judge Roy Moore, who lost to Democrat Doug Jones in Alabama's U.S. Senate race that year. Moore was accused of sexually pursuing high school girls when he was in his thirties.

"Presler, who spoke at CPAC 2021 in Orlando, has dedicated his 2021 to a nationwide tour aimed at unseating Trump dissenters in the GOP ranks," Sollenberger notes. "He aligned himself in that effort with Stefanik, who has easily defended her seat in a reliably conservative upstate district and has not yet drawn a serious primary opponent. But Stefanik's rise to House leadership has made her a top target for Democrats, who will try to exploit her radical drift among moderate voters and have already begun pouring money into 2022 challengers."