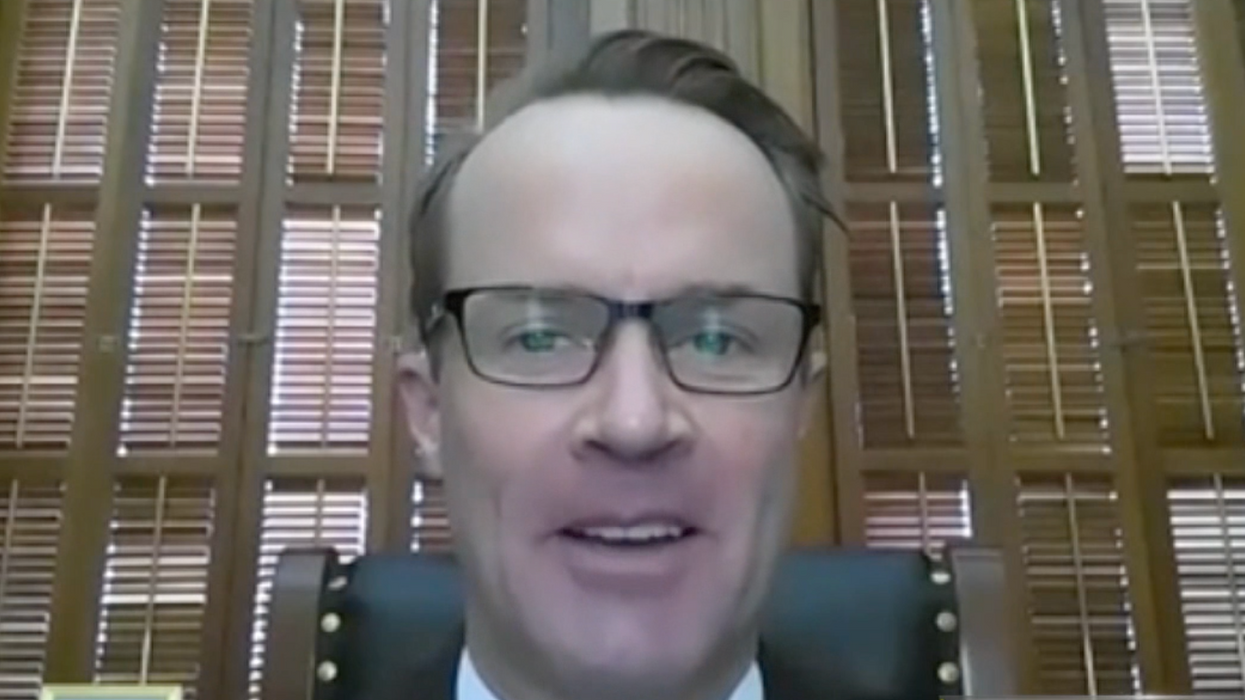 Image via Screengrab.
Cassandra Pollock
and
The Texas Tribune
July 27, 2021

By Cassandra Pollock, The Texas Tribune

"Speaker Dade Phelan signs civil arrest warrant for Texas House Democrat who returned to Washington" was first published by The Texas Tribune, a nonprofit, nonpartisan media organization that informs Texans — and engages with them — about public policy, politics, government and statewide issues.

Texas House Speaker Dade Phelan, R-Beaumont, signed a civil warrant for the arrest of state Rep. Philip Cortez, a San Antonio Democrat who rejoined his colleagues in Washington, D.C., on Sunday to help prevent the passage of a GOP-backed election bill.

The warrant is not likely to have impact since Texas law enforcement lacks jurisdiction outside the state. It is the first one signed by the speaker since more than 50 House Democrats left the state to block Republicans from having the quorum needed to pass legislation during the special legislative session that began earlier this month.

Last week, Cortez returned to Austin from Washington in what he said was an attempt to engage in "good faith dialogue" about House Bill 3, the election legislation. Other Democrats criticized Cortez's move, saying the lawmaker did not first consult with them before returning to Austin.

By Sunday though, Cortez was back in Washington, saying in a statement that talks with lawmakers in Austin on negotiating the legislation "have not produced progress."

In a statement Monday, Phelan said that Cortez "has irrevocably broken my trust and the trust of this chamber" after the lawmaker "represented to me and his fellow members that he wanted to work on policy and find solutions to bring his colleagues back to Texas."

"As a condition of being granted permission to temporarily leave the House floor, Rep. Cortez promised his House colleagues that he would return," the speaker said. "Instead, he fled the state."

Cortez, who chairs the House Urban Affairs Committee, did not directly address the warrant in a statement Monday that said he owes "a duty to my constituents to do everything I can to stop this harmful legislation."

"I will continue fighting for my constituents to ensure fair and full access to the ballot box," he said. "All Texans deserve nothing less."

Later Monday, during a virtual meeting with reporters, state Rep. Jim Murphy, a Houston Republican who chairs the House GOP Caucus, did not express any frustration with Cortez returning to Washington and said he hoped the lawmaker would return to Austin again. Other Republicans applauded Phelan for signing the warrant, including state Rep. Jeff Leach of Plano, who had questioned the night before why Cortez wasn't arrested before leaving the state.

After Democrats left the state, the House voted overwhelmingly to issue what's known as a "call of the House" in an effort to regain quorum. Part of that effort included sending law enforcement after those Democrats, though Republicans acknowledged that state authorities couldn't force lawmakers back to the Texas Capitol so long as they remained out of state.

The current special session is slated to end Aug. 6, and Democrats have said they do not plan to return to the state before then. Gov. Greg Abbott has said he plans to call additional special sessions to get his priority legislation passed.

This article originally appeared in The Texas Tribune at https://www.texastribune.org/2021/07/26/dade-phelan-civil-arrest-warrant-house-democrat-philip-cortez/.