Here's how religion played a role in the Jan. 6 insurrection: report 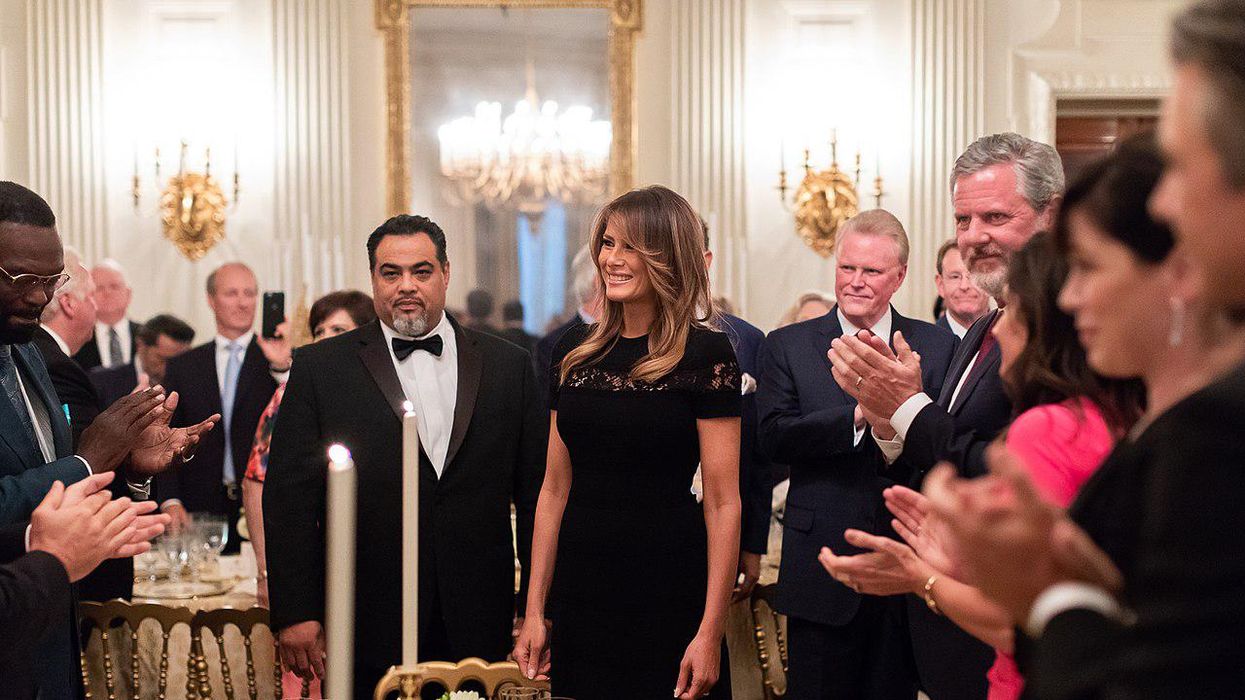 Melania Trump with Jerry Falwell, Jr. and others at an evangelical dinner in 2018, Wikimedia Commons
Alex Henderson
July 06, 2021

The Republican Party and fundamentalist evangelical Christianity have been joined at the hip since the early 1980s, when President Ronald Reagan openly embraced the Moral Majority's Rev. Jerry Falwell, Sr., the Rev. Pat Robertson and other Christian Right theocrats — much to the dismay of arch-conservative Sen. Barry Goldwater, who saw Falwell and Robertson as terrible for the GOP and terrible for the conservative movement. Former President Donald Trump has been a major ally of the Christian Right, and the Washington Post's Michelle Boorstein examines the connection between fundamentalist Christianity and the January 6 insurrection in an article published six months later.

The January 6 insurrection was primarily a political attack. But in her article, Boorstein stresses that some of the rioters had religious motivations as well.

"Pauline Bauer, Stephen Baker and Jenna Ryan were among the thousands who descended on the Capitol in protest of what they falsely called a stolen election, including some who saw themselves engaged in a spiritual war," Boorstein reports. "For many, their religious beliefs were not tied to any specific church or denomination — leaders of major denominations and megachurches, and even President Donald Trump's faith advisers, were absent that day. For such people, their faith is individualistic, largely free of structures, rules or the approval of clergy."

Boorstein continues, "Many forces contributed to the attack on the Capitol, including Trump's false claims of electoral victory and American anger with institutions. But part of the mix, say experts on American religion, is the fact that the country is in a period when institutional religion is breaking apart, becoming more individualized and more disconnected from denominations, theological credentials and oversight."

One of the most famous January 6 rioters was Jacob Chansley, a.k.a. the QAnon Shaman. BuzzFeed's Zoe Tillman reports that Chansley's latest request to be released from pretrial detention has been rejected:

Although fundamentalist Protestants were part of the January 6 insurrection, some of Chansley's practices are more comparable to those of eastern religion.

"Many Christians at the Capitol on January 6 were part of more conventional, affiliated faith, including pastors, Catholic priests and bused-in church groups," Boorstein observes. "But what researchers studying January 6 find remarkable are the leaderless, idiosyncratic expressions of religion that day. Among them are those of Bauer, who wrote to a judge last month that she's a 'free living soul' and an 'ambassador of Christ,' and of Jake Chansley, the 'QAnon Shaman' who prayed to Christ at a dais in the Senate and calls himself a 'multidimensional being.'"

Robert Pape, who teaches political science at the University of Chicago, told the Washington Post that religious fanaticism doesn't necessarily come from being indoctrinated by a particular sect — and such fanatics, according to Pape, "tend to have a thin knowledge and understanding of their religion."

Pape explained, "Recruits tend to be making individual decisions about the ideologies they want to follow and even what it means. It's very much at the level of the individual."