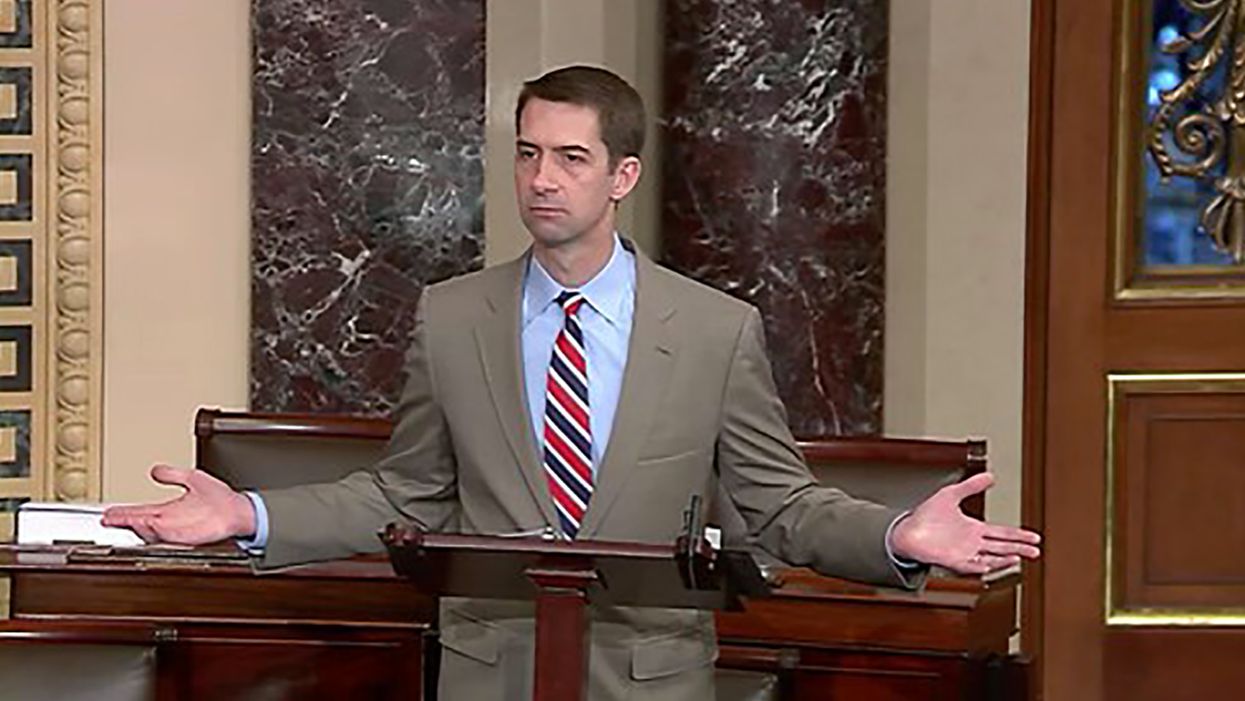 With President Joe Biden having withdrawn his nomination of Neera Tanden to head the Office of Management and Budget, some far-right Republicans are hoping to sink another Biden nominee: Vanita Gupta, the president's pick for associate U.S. attorney general. Sen. Tom Cotton of Arkansas has insinuated that law enforcement organizations were coerced into endorsing Gupta, but according to Washington Post reporter Matt Zapotosky, those groups are flatly denying that claim.

When Cotton was questioning Gupta before the Senate Judiciary Committee, he asked, "Did you, or anyone on your behalf or anyone in or affiliated with the Biden campaign transition or administration, pressure those organizations with threats of retaliation if they did not support your nomination?.... There were no — there were no threats to cut off access or influence to the Department of Justice if those law enforcement organizations did not support your nomination?"

The 46-year-old Gupta, who served as an assistant U.S. attorney general for civil rights under President Barack Obama, responded that no, there were no such threats. And according to Zapotosky, the Washington Post confirmed that — just as Gupta testified — no one in law enforcement was bullied into coercing her.

Zapotosky reports, "Officials representing nine of the country's premier law enforcement professional organizations told the Washington Post this week they were not pressured into supporting Gupta's nomination. Some added that they were taken aback by Cotton's questioning, which had implied they had caved in to threats."

One of the law enforcement organizations that has endorsed Gupta is the Fraternal Order of Police. Jim Pasco, the FOP's executive director, told the Post that he was "kind of shocked by" Cotton's questioning of Gupta and said that if the Arkansas senator "really suspects that" the GOP was bullied into endorsing her, "then he doesn't really know the law enforcement organizations as well as he thinks he does — and he certainly doesn't know Vanita Gupta as well as I know her."

In addition to the FOP, law enforcement groups that have endorsed Gupta include the International Association of Chiefs of Police, the Major Cities Chiefs Association and the Major County Sheriffs of America. And Chuck Wexler, executive director of the Police Executive Research Forum, described Cotton's questions as "absurd" and told the Post, "Do you really think you can stand up to law enforcement and threaten them? Do you really think that's going to work?"

David Mahoney, who serves as president of the National Sheriffs' Association in addition to being sheriff for Dane County, Wisconsin, told the Post, "I absolutely have not been pressured."

Mahoney said of Cotton's questions, "I think it's highly political, and I don't pay much attention to that."

Similarly, Kym Craven, executive director of the National Association of Women Law Enforcement Executives — another group that has endorsed Gupta — told the Post there was "no pressure at all" to make an endorsement.

Craven told the Post, "We are a policing profession, and our reputations are based on what we do and what we say. And certainly, we would not go along with something where we felt we were coerced into making any recommendations for anybody."