Suez Canal blockage: Here's what it takes to unwedge a megaship 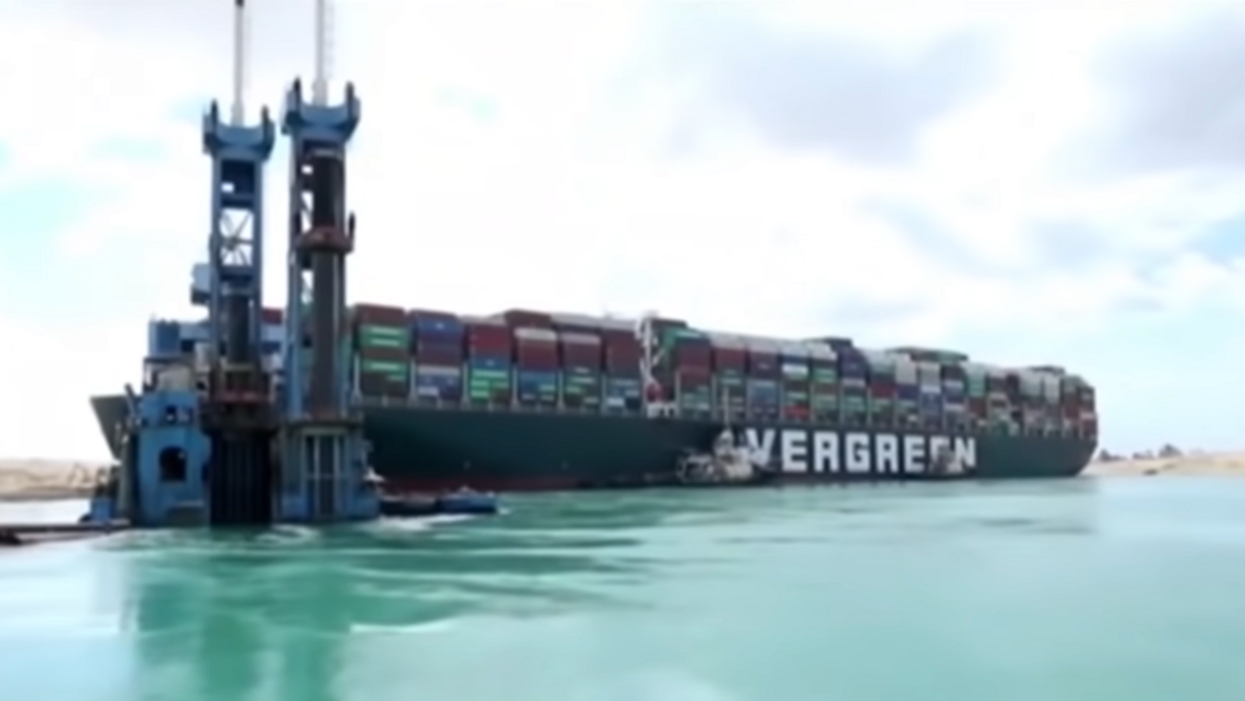 One of the world's largest container ships, named Ever Given, has been wedged across the Suez Canal since it was blown off course by high winds in the early hours of March 23, blocking one of the busiest maritime trade corridors in the world.

The incident has created a logjam of hundreds of tankers, the operators of which are now weighing up whether to wait for the stranded container ship to be cleared, or whether rerouting around the Cape of Good Hope, at the southernmost point of Africa, will hasten their arrival at port.

That decision hinges upon how long it'll take to refloat the Ever Given, tugging it away from the banks of the canal and back into operation. Several maritime salvage firms, with experience rescuing stricken vessels, are already in attendance at the scene – but it's unclear how much time they'll need to dislodge the ship.

The methods they'll use to do so, however, will be the roughly the same as past examples. A grounded ship of any size requires additional buoyancy to help salvage crews ease it from where it's stuck. And, in the case of the Ever Given, horizontal force – applied by tug boats – will be required to heave the ship from both banks of the Suez Canal.

The Ever Given is 400 metres in length and has the capacity to carry over 20,000 20-foot containers. It was these containers, stacked high on the deck, that are suspected to have caught the gust of wind, like a sailboat's sail, that ultimately blew the ship off course.

It appears that the Ever Given lost control while heading northbound along the Suez Canal, diverting its course in such a way that one end struck one of the canal's banks. The momentum of the massive vessel will then have pulled it round until the other end struck the other bank – slowly, perhaps, but with a huge amount of force.

The wedged vessel has been compared to a 'beached whale'.

The precise way in which the Ever Given struck ground will be important for salvage teams to understand because, when refloating a grounded ship, it's usually easiest to extract it the way it went in – as with a splinter.

Salvaging has always been an important part of maritime operations, with specialist companies called in when large container ships or tankers run aground. The process of freeing grounded vessels is often referred to as refloating.

In 2016, a ship of similar size to the Ever Given, called the CSCL Indian Ocean, took six days to refloat after grounding on the bank of the Elbe River in Germany. The same salvage techniques used then will be used this time around – albeit in the more restrictive environment of a narrow canal.

There are two basic approaches to extracting a grounded ship. First, salvage crews will work to increase the vessel's vertical buoyancy force, which means the whole boat floats higher in the water.

Second, tug boats will apply sufficient horizontal force to overcome the static friction generated by whatever material the boat is resting upon. The larger and heavier the vessel, the more force required by the tug boats to refloat the ship.

Swiftest to mobilise are a fleet of tugs, eight of which are already in position at the site of the stranded ship. But reports from the scene suggest that tugs have already attempted an unsuccessful operation to unwedge the ship.

That means the first priority of salvage teams will instead be to make the Ever Given float higher in the water – by dredging near the sections of the bank upon which the ship is stranded, and by increasing the ship's buoyancy.

In previous salvage operations, buoyancy air bags have been attached to the underwater section of the hull to encourage it to float. But in the case of the Ever Given, this will need to happen alongside the unloading of the ship's cargo, the removing of all on-board ballast water, and the draining of the ship's fuel, all in an effort to make the vessel lighter and more buoyant before the tugs attempt another horizontal pull.

The removal of cargo will be particularly challenging in this case. Seeing as land access will be difficult due to the Suez Canal's sandy surrounds, a floating crane may be required, which will take time to transport to the ship and which will only be able to remove one container at a time.

It might prove quicker to pump the fuel off the vessel instead of removing containers, which would require a small refuelling vessel to pull alongside to take on the fuel. Those overseeing the salvage will have access to computer models of the vessel to tell exactly which load-lightening strategy will be most effective.

Despite all these measures, increasing buoyancy during salvage usually relies on a rising tide, which provides an extra boost in sea level for the ship to potentially refloat upon. Unfortunately, the tidal range within the Suez Canal is limited compared to coastal waters, which will hamper refloating attempts – though a promising “spring tide", which is higher than the usual high tide, is due over the weekend.

SMIT Salvage, a Dutch maritime salvage firm, has experience 'refloating' large vessels that have run aground.

It's difficult to predict the rapidity with which the various components of the salvage puzzle can be brought to bear in the Suez Canal. This is not a standard salvage operation: the time pressure, with ships queuing at either end of the strait, will be weighing on everyone's minds.

But with expert salvage crews now on hand, and tried-and-tested refloating methods being put in place around the Ever Given, it's likely to be only a matter of days – rather than weeks – before the ship is unwedged from the Suez Canal.