Donald Trump's campaign owes almost half its debt to its own company: new filings 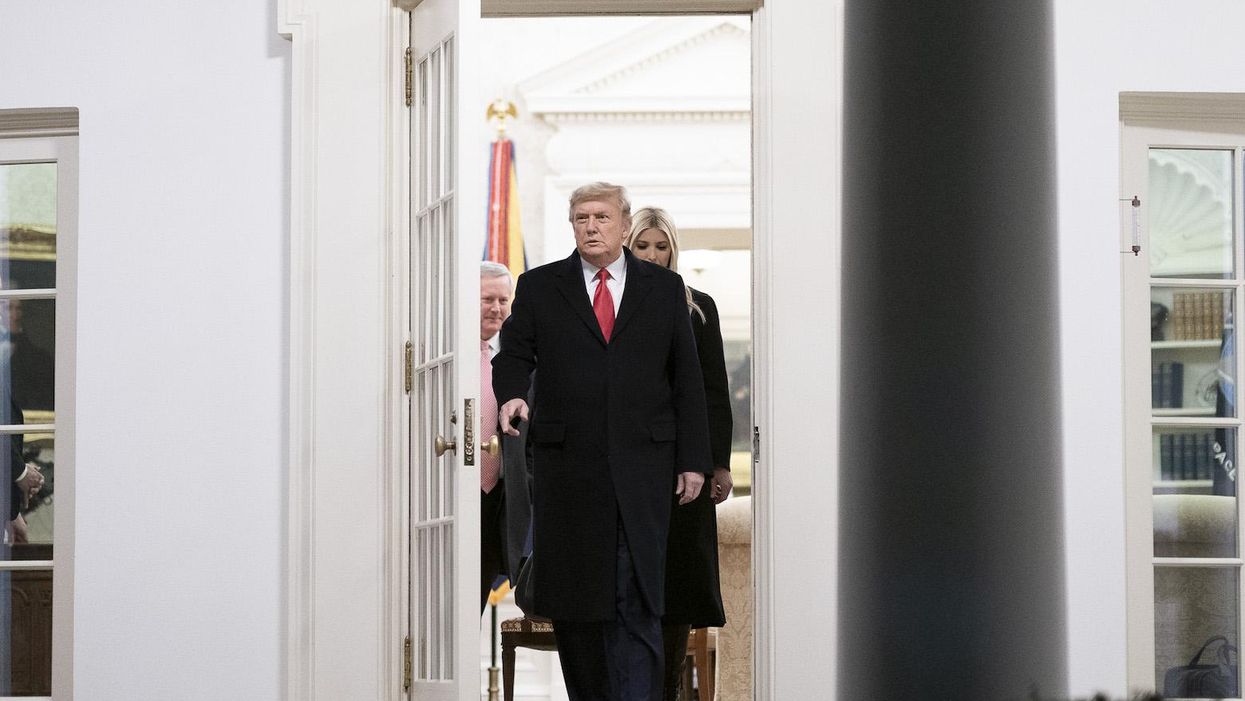 Photo via the White House.
Roger Sollenberger
and
Salon
February 03, 2021

The Trump campaign can continue to raise money after claiming more than $2.7 million in debt in its last federal finance report of the year, with nearly half that deficit owed to a shell company that was created and run by top campaign officials.

The filing, submitted Sunday to the Federal Election Commission, also said that the campaign refunded more than $11 million in illegal donations to nearly 4,300 contributors after the November election, even though, as a senior campaign official told Salon, the Republican National Committee automatically redirected excessive repeat donations from the Trump campaign to the RNC.

In broad terms, perhaps the most notable information from the latest report is the steep drop in revenue. In the first 19 days after Trump's electoral defeat, his campaign and the RNC together pulled in more than $207 million with a fundraising rampage tied to the false allegation that Democrats had stolen the election, suggesting the money would go toward bankrolling a multi-state legal challenge that would reverse the outcome. Targeted donors were told in fine print that a chunk of their contributions would go towards paying down campaign debt, but that stream went dry when Trump began diverting money to his new leadership PAC.

But the new filing shows that in the weeks between Nov. 24 and Dec. 31, the campaign saw its cash stockpile drop, closing the year with $10.7 million on hand — less than one percent of the more than $1 billion raised over the course of Trump's four years in office. In the same time frame, Trump's new PAC, Save America, raised about $31 million, according to its year-end filing, hardly the runaway haul that some observers had anticipated.

However, the debt means that the campaign can legally continue to raise money until it makes good on what it owes, including through efforts like the post-election blitz, which split funds between the campaign and other entities, such as Save America — which could double as Trump's personal account. In this fashion, the campaign can potentially serve as a kind of pass-through revenue stream for the former president. If the Senate's impeachment verdict does not bar him from seeking elected office in the future, Trump may also reserve the right to keep the campaign running for 2024.

Notably, more than $1 million of that debt is owed to an entity called American Made Media Consultants (AMMC), a shell company created and run by top officials, including former campaign manager Brad Parscale and former White House political adviser Jared Kushner, Trump's son-in-law. AMMC was structured so the campaign paid the company directly, and then AMMC paid vendors for digital and media services. It quickly became far and away the campaign's largest vendor, receiving more than $700 million in about 18 months, FEC filings show. Campaign finance experts say the shell system is illegal, because it hides and misrepresents the true destinations and use of donor funds.

But this shell system not only hides the campaign's true vendors, it also obscures AMMC's own debts. This means that the campaign either owes money to unknown companies through AMMC, or owes money to its own officials. Campaign finance expert Brett Kappel told Salon that such a system would appeal to a campaign that needs or wants to prioritize who it pays and when.

"In the days leading up to the election, the Trump campaign was running out of cash, and it looks like they chose to defer payments to vendors who they knew wouldn't complain — like the U.S. Treasury, which the campaign still owes $600,000," Kappel said, referencing the second-largest debt listed in the campaign's latest filing. "Some of those vendors happen to have close ties to the campaign, and some, like American Made Media, happen to employ campaign officials themselves. These companies likely wouldn't mind waiting on their payments, at least not as much."

It's also significant that the Trump campaign's refund lists appear to have grown shorter. In the weeks leading up to the election, the FEC notified the campaign multiple times that it would have to refund or otherwise re-designate money from thousands of donors who had exceeded the legal limit ($5,600 combined for the primary and general elections; $2,800 for each election individually). While these notices are fairly common, some of the lists of maxed-out donors were extraordinarily long, several hundred pages longer than notices sent to the Biden campaign.

This is likely a result of a fairly new fundraising option, where donors can choose automatically repeating contributions. Over time those add up, and since Trump's campaign began raising money almost immediately after he took office in 2017, chances that repeat donors would max out were high. But something counterintuitive happened: It would seem logical that more repeat donors would hit their limits as more time passes, but the FEC's notices to the Trump campaign grew significantly shorter as the election neared.

A top campaign official told Salon that the campaign captured and rerouted overages to the Republican National Committee: "We move people off the list and to RNC donations once over," the official said, adding that the RNC built the automated process — not the campaign. The official did not reply when asked whether donors were notified that their money had been redirected, or whether they were given the chance to reclaim or reassign their contributions on their own.

In an email to Salon, an RNC spokesperson pushed back on the characterization, explaining that committees participating in joint fundraising agreements typically transfer overages, and that in this case the arrangement was "part of the disclaimer," and that donors had the option to change where their money goes before making the contribution.

This article has been updated with comment from the RNC.