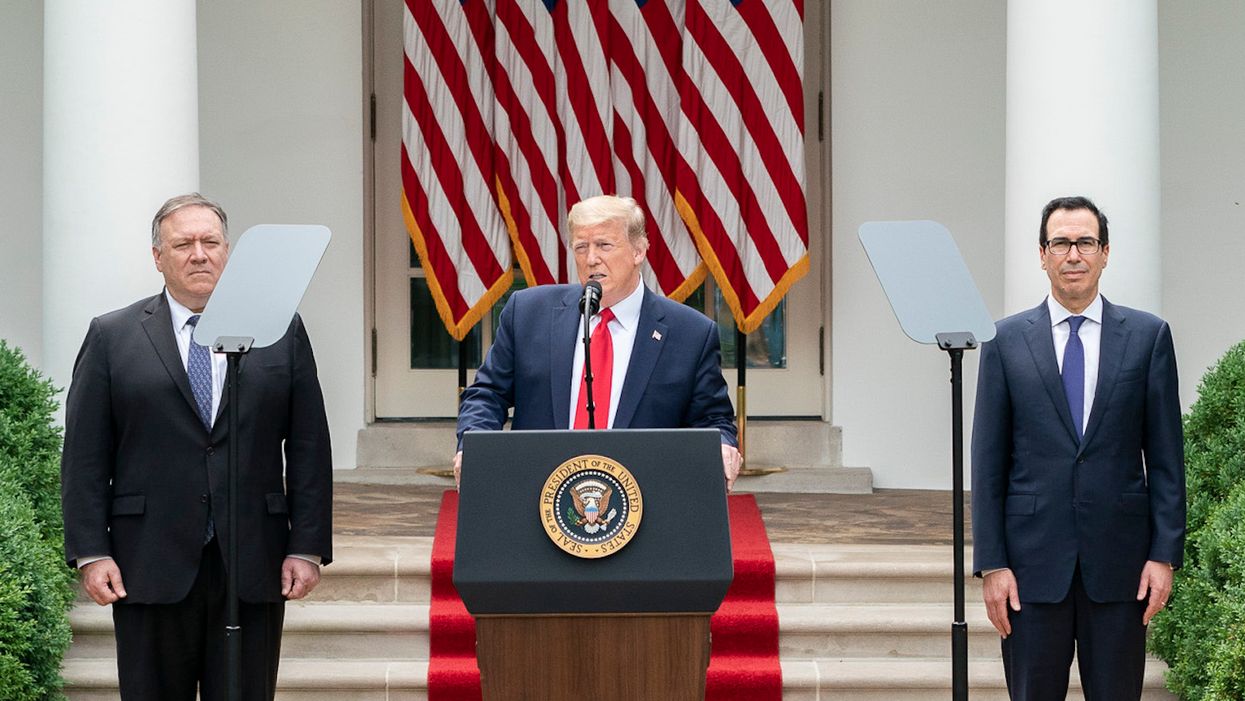 President Donald J. Trump, joined by senior White House advisors and Cabinet members, addresses his remarks in the Rose Garden at a press briefing on issues with China and announcing the termination of U.S. relations with the World health Organization. (Official White House Photo by Joyce N. Boghosian)
Trump isn't the first corporate type to veer into politics — but in an ignoble history, he's definitely the worst
Meaghan Ellis
January 16, 2021

Following the deadly riots at the U.S. Capitol on Jan. 6, dozens of major corporations, including financial institutions and Fortune 500 companies, have opted to sever ties with President Donald Trump and his businesses. Some corporations have even gone a step further by halting political donations to the Republican Party. In more drastic cases, political donations have been halted for both political parties.

However, an editorial published by Mother Jones highlights how these same companies had no issue backing Trump and the Republican Party when the president began pushing the envelope to distance from democratic norms in order to bring his own agenda to fruition. At the time, these same companies benefited from Trump and Republican lawmakers' passing of laws that ultimately saved corporations millions of dollars.

Dennis Kelleher, president of the Wall Street non-profit for financial reform, Better Markets, noted the "hypocrisy" in corporations' stance as he detailed his concern about their swift efforts to distance from the embattled president.

"Trump has not only broken norms of democracy but broken the law for years, while they comfortably stuffed their pockets with cash from tax cuts and deregulation," Kelleher said. "Now that Trump is merely days from leaving office, they have claimed to have suddenly found their values. It is, in many ways, hypocrisy."

The publication went on to highlight the "biggest prize" corporations received in 2017 from the Republican-led House and Senate that ultimately paved the way for major corporate tax breaks.

The biggest prize won by the corporations from Republican policy-making in the Trump era came with the 2017 Tax Cuts and Jobs Act. The bill—his first major legislative achievement—enacted historic changes that have disproportionately benefited corporations and the wealthy.

According to William Gale, the co-director of the Tax Policy Center, that particular bill, which slashed corporate taxes by a staggering 14%, served as a "windfall gain" for corporate entities. Some of the companies that benefited greatly from the pandemic have also been criticized. Amazon and Verizon have been specifically criticized.

Amazon, for instance, called Republicans' actions last week an "unacceptable attempt to undermine a legitimate democratic process." Yet for two of the last three years, Amazon, which spent hundreds of thousands of dollars lobbying Congress and the White House for the Trump tax cuts, has enjoyed a negative effective federal tax rate.

Although Kelleher noted that the abrupt decision is likely one that was not planned, he still sees it as more of a "PR campaign" as opposed to a commitment that companies will stick with for the long-term.

They know going into 2021 how much they have estimated they're going to give, to who, and when. So let them disclose that information, and tell the public exactly which contributions they're no longer going to make," Kelleher says. "Until and unless they do that everybody should be deeply skeptical of the genuineness of what is so far a PR campaign."