From profiles in courage to profiles in sore losing: The GOP's open sedition and clumsy coup is a crime 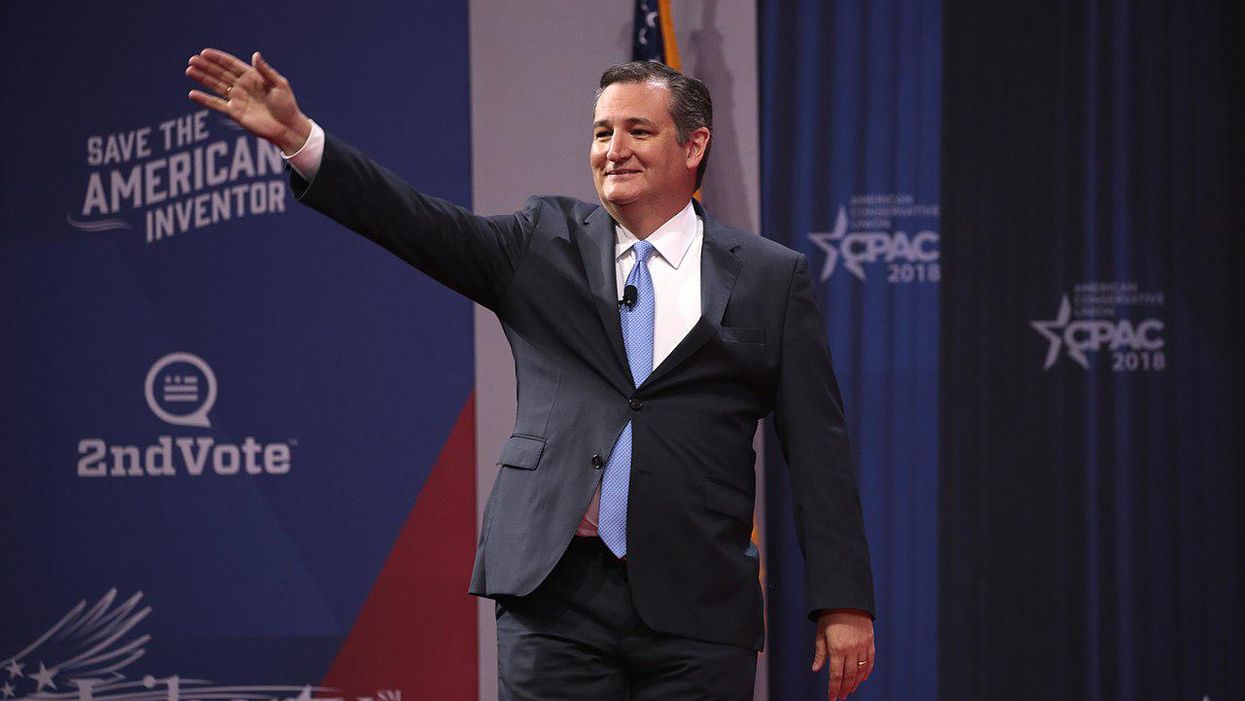 Ever since it first was published in 1956, there has been a joke about John F. Kennedy's book Profiles in Courage (largely ghosted by speechwriter and advisor Ted Sorensen), historical portraits of eight US senators who demonstrated bravery in the face of enormous political opposition.

Kennedy himself and others kidded that the volume would have been longer but there just wasn't that much valor in the Senate for a writer to celebrate.

Tragically, that rings even truer today. The quality of leadership, particularly among the GOP Senate majority, has dipped to a level not witnessed since the first Gilded Age, when 19th century members of the Senate still were appointed by state legislatures and cuddled snugly in the deep pockets of the oil, coal, lumber and railroad barons who passed out bribes like cigars, buying loyalty with piles of cash to keep members at their beck and call.

Remember the immortal words attributed to the thoroughly corrupt US senator from Pennsylvania (and briefly, Lincoln's first secretary of war) Simon Cameron: "An honest politician is one who when he's bought stays bought."

So while the current temporary occupant of the Oval Office rightfully has been excoriated by my colleagues and me over and again, perhaps we haven't paid sufficient attention to the enablers who served in the mercifully ended 116th Congress.

Unfortunately, most of them are popping right back up in the new 117th, men and women devoid of scruples and eager only for the power to hold the country back from healthy reform—and all of this in the name of greed, self-aggrandizement, political domination and slavish devotion to a childish, petulant demagogue—a soon-to-be-ex-president whose malicious bungling of a crisis has helped lead to the death of more than 350,000 Americans. Donald John Trump has thwarted every effort to save lives but one, the successful hunt for a vaccine, and yet, it now seems that the distribution of that lifesaver has been mishandled, too.

First, just take a moment to consider Republican members of the House of Representatives. In large part, for the past two years they've been held at bay by the Democratic majority there, now narrowed by the 2020 election results. (Remember, too, that those Democrats managed to pass an agenda of legislative progress only to find it stymied at every turn by Mitch McConnell and the GOP majority Senate.) Nonetheless, the GOP House members' closed minds, refusal to recognize the effectiveness of good government and urge to wreak havoc have had an indelible effect on American democracy, one that will take years to fully assess and repair.

Particular disgust should be directed toward those 126 GOP House members who recently signed an amicus brief in support of that now rejected, dizzy attempt by Texas Attorney General Ken Paxton to overturn election results in four other states.

(The satirical news site The Onion deftly handled this, calling out each of the 126 with an individualized message. To Rep. Gus Bilirakis of Florida, "You have been absolutely fearless when stopping the American people from participating in elections;" to Rep. Tim Burchett of Tennessee, "Never again will we allow U.S. citizens to recklessly turn in their ballots;" to Rep. Mike Johnson of Louisiana, "Thank you for bravely standing up to the American voters;" and so on. Each was accompanied by an especially beguiling photo of a maggot.)

Many of those same members and more—some 140—are now lending their names to the smoke-and-mirrors effort in Congress to challenge the votes of the Electoral College, which already has given the election to Joe Biden. The votes of the electors officially are to be announced on Wednesday by Vice President Mike Pence in his capacity as President of the Senate.

In normal times, this would be a mere formality, but Trump and Republicans have decided to turn it into a clumsy attempt at a coup d'etat, ignoring the rule of law and numerous court rulings. They're putting on an act, trying to overturn the results of a free and fair election as a dumbshow of power, all out of fear of Tin Hat Trump's "base" of voters and to preserve a status quo that ignores the diversity of America, cossets the rich and fosters hate, poverty and inequality.

In the House, the leaders of this effort include the feckless Louie Gohmert of Texas, known as "America's craziest and dumbest congressman." Having just had an election lawsuit thrown out by a Federal appeals court on New Year's Day, he went on Newsmax suggesting that the alternative now is going to the streets and "being as violent as antifa and BLM."

He's joined in this mad pursuit—simultaneously dumbing down and radicalizing a significant portion of the party and American populace—by the usual suspects, led by Rep. Mo Brooks of Alabama and including Jeff Van Drew of New Jersey, Jody Hice of Georgia and Joe Wilson of South Carolina. New members of the House are piping up, too, including QAnon queen Marjorie Taylor Greene of Georgia.

On the Senate side, opposition to finalizing the presidential result is being led by Josh Hawley of Missouri, a man of vaulting ambition who wants to be president so badly he's is willing to violate his sworn oath of office and destroy the Constitution and Bill of Rights to get there, using conspiracy theories and falsehoods to oil his way into the White House as early as 2024.

In a letter published Saturday, eleven other Republican senators and senators-elect demanded an "emergency 10-day audit" of results in "the disputed states,"—in other words, the states Trump is shocked—shocked!—that he lost to Joe Biden, states he assumed would be a cinch for him. They weren't.

Sadly, this Dirty Dozen (including Hawley), a so-called "Sedition Caucus" in the Senate, probably won't be deterred by news of that phone call Trump made to Georgia's Republican Secretary of State Brad Raffensperger, trying to bully him into finding more votes to change the result in the state from Biden to Trump—a conversation much like the one with Ukraine President Zelensky that a year ago got Donald Trump impeached.

Trump's impeachment didn't lead to conviction by the Senate, thanks to Majority Leader Mitch McConnell, who would brook no new evidence or witnesses, turning the trial into a sham with a predetermined outcome. But McConnell now is opposed to his colleagues' efforts to subvert the Electoral College. Why? Because McConnell is all about the raw power he alone holds in the Senate. He cares for that and little else except, of course, tax cuts for the superrich, holding rules and regulations at bay and getting as many conservative Federal judges approved by the Senate as quickly as he can.

Look to his refusal in 2016 to allow Obama's Supreme Court pick Merrick Garland to even get a hearing, claiming that it was unfair to voters to decide a court seat in an election year—and then hypocritically turning around and ramming through Trump's choice of Amy Coney Barrett for the court just before the 2020 vote. Then remember all the legislation he has kept from coming to the Senate floor at all. That's all you need to know.

In the midst of all the phony post-election turbulence perpetrated by Trump and company, what matters most to McConnell is hanging onto his throne. He's worried that all of this current craziness will cost Republicans those two seats in Georgia on Tuesday and take away his majority. Right now, nothing else matters. Donald Trump and his coterie of congressional sycophants are standing in the way.

It is quite a crew up there on the Hill these days. You all know some of the other reprobates—Tom Cotton, Marco Rubio, Lindsey Graham, John Cornyn, Chuck Grassley, Rick Scott—etcetera and ad nauseum, emphasis on the nauseum. The Senate used to be described as the world's greatest deliberative body. Now the Republicans act as if it's sleepaway camp for wayward boys and girls of the right-wing persuasion. Behind closed doors they may mock and dislike Trump's infantile behavior but they admire his authoritarian style and next time around hope to make it permanent. Not as a bug in the system, as the saying goes, but a feature.

Over these last few Trump years—years that have felt like decades— several have cited Leopold Amery, Conservative member of the British House of Commons who in the opening months of World War II told Prime Minister Neville Chamberlain, "You have sat too long here for any good you have been doing. In the name of God, go!"

What often goes unnoted is that Amery's words were inspired by the speech Oliver Cromwell gave in 1653 dismissing Parliament. His words could apply as appropriately to today's Senate as they do to our vain and irresponsible president and his cronies.

"Ye are a factious crew, and enemies to all good government," Cromwell declared. "Ye are a pack of mercenary wretches, and would like Esau sell your country for a mess of pottage, and like Judas betray your God for a few pieces of money. Is there a single virtue now remaining amongst you? Is there one vice you do not possess?"

Apparently not. These senators and their leader McConnell wish to quash our nation's legacy of democracy, albeit imperfect for sure, that until now has saved us from permanent mayhem. If this be treason, make the most of it, they seem to say, grossly twisting the rhetoric of founder Patrick Henry. It is wrong, morally reprehensible and carries the seeds of our destruction.

This one thing we can hope: the excesses of Congress during the Gilded Age and the robber barons who paid for it finally led to some real reform. After these next two weeks, when the fog of nonsense and chicanery has momentarily cleared, the fight must instantly begin to rebuild, renew and reform once again.