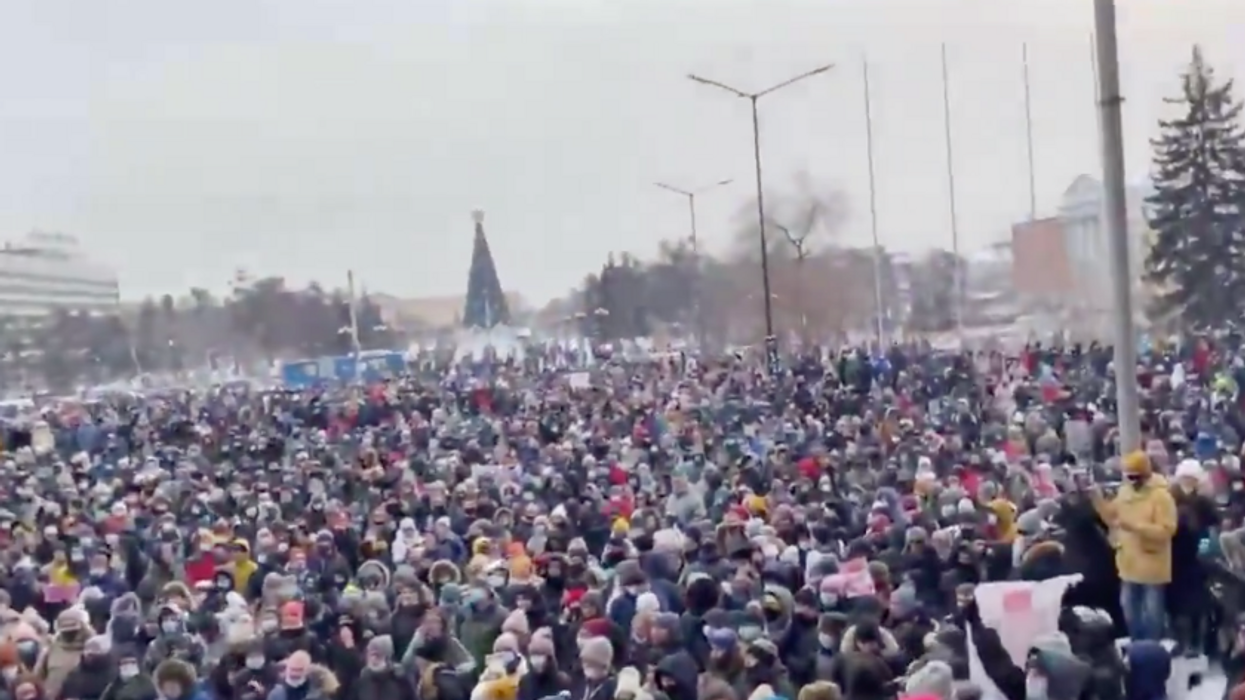 Russian citizens in 38 cities are protesting the country's sham elections in which Russian President Vladimir Putin has felt so threatened by the opposition candidate, anti-corruption activist Alexei Navalny, that he has had him imprisoned and poisoned in an attempt to silence his voice and kill his movement.

The Russian presidential elections are a complete sham used to legitimate Putin's power. In the last election, Putin "won" nearly 77 percent of the vote amid claims of ballot stuffing, the Kremlin choosing which candidates get to run, police arresting any anti-Putin protesters and pro-Putin candidates receiving far more financial backing than his opponents.

Navalny himself, a popular anti-corruption campaigner who is one of Putin's most outspoken critics, according to The Week, has previously been barred from running due to a trumped-up and controversial fraud conviction allegedly masterminded by Putin. In August 2020, Navalny was poisoned with a nerve agent called Novichok and survived his hospitalization. Navalny has said he got a Russian federal agent to reveal how he was poisoned, though the Kremlin has denied any involvement.

Three days ago, Navalny was jailed once more for allegedly violating his parole. He now inhabits Matrosskaya Tishina or Sailor's Silence, a jail in Moscow's north-east region that has housed high-ranking prisoners that authorities have wanted to cut off from the outside world since the Soviet era, according to Reuters. The jail is notoriously deadly.

Russian citizens across the nation have seemingly had enough and have begun protesting his imprisonment, as the videos below attest. Hundreds have been arrested as police fight to maintain control.

The U.S. Embassy in Russia has weighed in by saying, "We're watching reports of protests in 38 Russian cities, arrests of 350+ peaceful protesters and journalists. The U.S. supports the right of all people to peaceful protest, freedom of expression. Steps being taken by Russian authorities are suppressing those rights."

Putin can’t rob the Russian people of hundreds of billions of dollars over twenty years and expect to get away with… https://t.co/HMSH0Twv4q
— Bill Browder (@Bill Browder)1611410186.0

Images from Russia today are transfixing: thousands all across the country defying authorities and protesting for… https://t.co/JQboeDadHa
— Susan Glasser (@Susan Glasser)1611406538.0

I’m just hoping against all hope this guy somehow independently came up with this outfit. https://t.co/VBKuZxhOHq
— Ben Collins (@Ben Collins)1611409823.0

Protests are taking place across Russia today, calling for Navalny’s release. This is Vladivostok, in the country’… https://t.co/sSUgpNS8He
— Matthew Luxmoore (@Matthew Luxmoore)1611387492.0