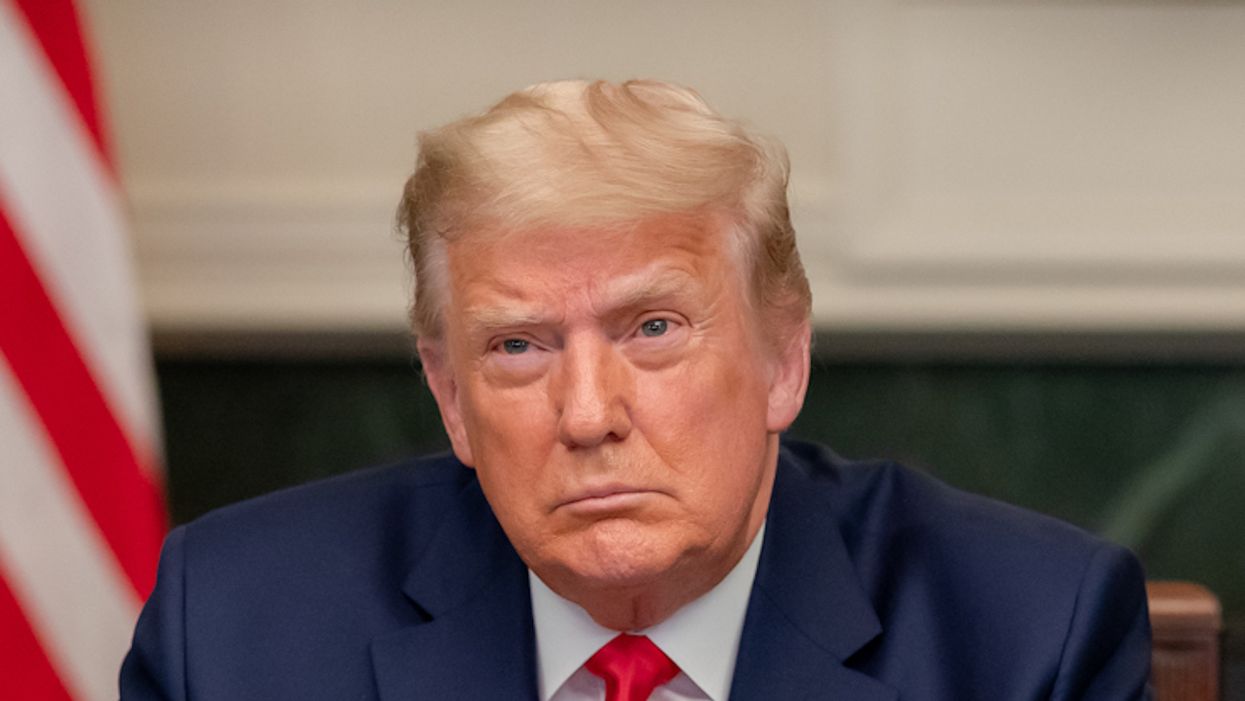 Saturday, December 5, President Donald Trump is scheduled to visit Georgia to campaign on behalf of two incumbent Republican U.S. Senate candidates: Sen. David Perdue and Sen. Kelly Loeffler. The outcome of the runoff elections in January will determine whether or not the GOP maintains its Senate majority. Georgia Republicans, journalist Marc Caputo reports in Politico, are "excited" that Trump will be speaking at a Saturday rally. But they are also "a little scared" about what the volatile outgoing president might say. And to complicate matters, some far-right pro-Trump attorneys are encouraging GOP voters to sit the runoff elections out.

Republicans in Georgia, according to Caputo, are "not entirely certain what to expect from the president's first post-election rally — or how much he understands that the event is about helping the two endangered GOP incumbents get across the finish line in the January 5 runoff, not advancing his own political interests or settling scores."

Trump, however, has been claiming, without evidence, that he is the real winner in Georgia and that he was the victim of widespread voter fraud in the Peach State. And some pro-Trump lawyers, including Sidney Powell and Lin Wood, appeared at a "Stop the Steal" rally on Wednesday, December 2 in Georgia — where they urged Republican voters to boycott the two "rigged" Senate runoff elections. Powell and Wood are saying, in essence, that there is no point in voting for Perdue or Loeffler because Democrats will steal those elections. And that's a different message from the Georgia Republicans who are campaigning aggressively for Perdue or Loeffler and are glad to see Trump campaigning for them.

Republican Allen Peake, a former state legislator in Georgia, is hoping that when Trump speaks at the December 5 rally, he will keep the focus on Perdue or Loeffler rather than claiming he has been the victim of widespread voter fraud.

Peake, who describes himself as a "mainstream Republican," told Politico, "It's important that Trump comes and focuses on the Senate election and not the other peripheral sideshow of whining and complaining and making baseless accusations. But that's kind of been his mode for the past four years. I don't think he will change. So, I'm very concerned about this on Saturday."

In Georgia, far-right Trump supporters have focused their ire on Secretary of State Brad Raffensperger, a conservative Republican, for acknowledging Biden as president-elect and stressing that there was zero evidence of widespread voter fraud in his state. Raffensperger has been the target of death threats, and Trump described him as "an enemy of the people." Trump has also been railing against Gov. Kemp for accepting Biden's victory.

Peake told Politico, "If all (Trump) does is whine and complain and talk bad about Kemp and the secretary of state, then the trip will be a disaster — and he might as well not even come. This is a crazy time in Georgia politics, that's for sure."

Republican Lynn Westmoreland, who formerly served in the Georgia House of Representatives, described the GOP infighting in the state as a "family feud" and told Politico, "People are mad. They're mad at the whole system.... Everyone's shooting arrows."

Caputo notes that Powell and Wood have added to the "chaos" in Georgia by filing "lawsuits against the state's election results with scant evidence but loads of conspiracy theories." According to the Politico reporter, "Wood and other Trump backers have encouraged Trump supporters not to vote January 5 if Loeffler and Perdue don't do more to deliver the state to Trump. A hand recount of ballots showed the president still lost the state. Powell, who was booted from the Trump legal team after her wild claims drew unflattering publicity, has alleged, without evidence, that Loeffler actually lost the (Georgia Senate) primary to (Doug) Collins."

Republican Buzz Brockway, another former state legislator interviewed by Politico, explained, "There's a lot of tension. How do you square the idea that the president and others are pushing that this election is stolen and rigged, but you should still go out and vote?"