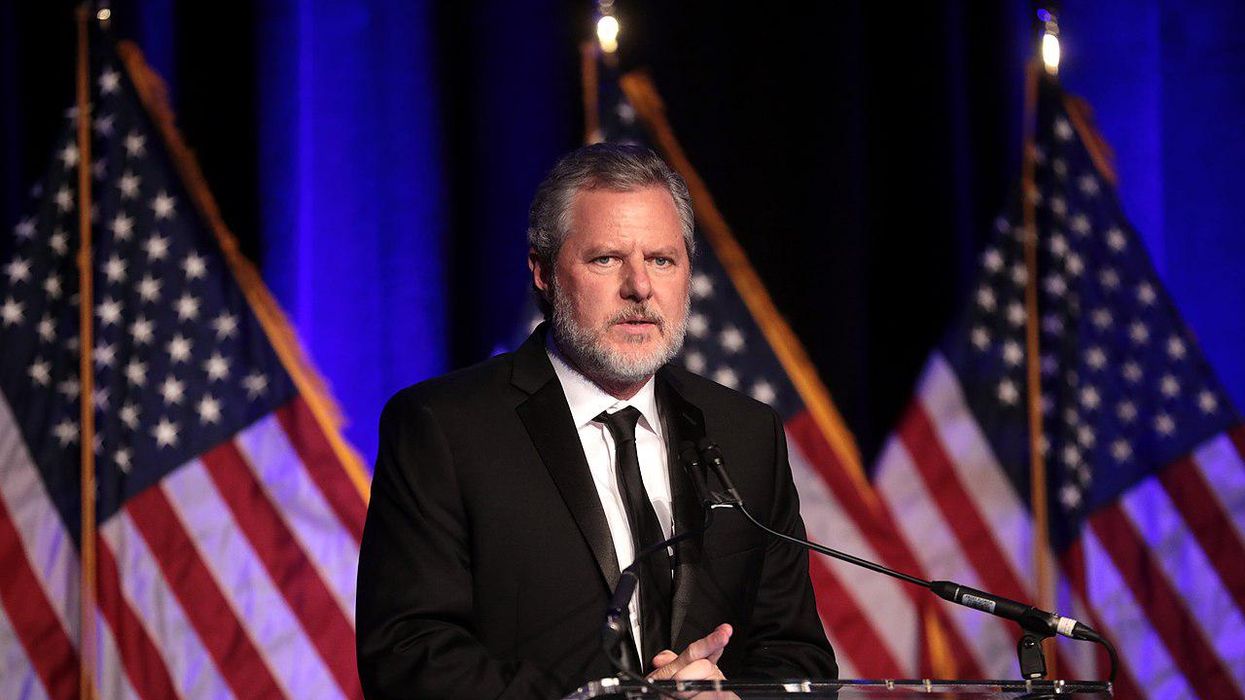 With the inauguration of President-elect Joe Biden less than a month away, the Christian right is in mourning. A major ally of far-right white evangelicals, President Donald Trump, is leaving the White House — and even though Biden is known for being a devout Catholic, he isn't nearly as friendly to the Christian Right's theocratic agenda. Journalist Maggie Severns, in an article published by Politico on December 22, discusses Trump's alliance with former Liberty University President Jerry Falwell Jr. — who, according to Severns, was free to spend millions of dollars on his political activity thanks to an executive order from Trump.

Severns' December 22 article follows a December 14 article for Politico in which she discussed the millions of dollars that Falwell Jr. spent promoting Trump and his causes at Liberty University.

Falwell Jr. is the son of the late Jerry Falwell Sr., founder of Liberty University and co-founder of the Moral Majority. The elder Falwell, who died in 2007, was an outspoken segregationist during the 1950s and 1960s and vigorously defended Jim Crow laws from the pulpit — and during the 1980s, he played a major role in the prominence that far-right white evangelicals and the Christian right movement achieved in the Republican Party.

Trump went out of his way to pander to the Christian right when he ran for president in 2016 — and it worked. Trump is wildly popular among Christian right evangelicals, and Falwell Jr. has been among his closest allies.

Severns, in her December 22 article, notes that Falwell, Jr.'s pro-Republican activities "appear to push the boundaries of the university's non-profit status, particularly given that the law explicitly bans nonprofits from assisting political candidates under a provision called the Johnson Amendment, named after former President Lyndon Johnson, who sponsored it in the Senate."

The Politico reporter notes that "under Falwell's leadership, the university directed more than $3 million to conservative organizations" in 2018 — and "in 2019, it created a think tank that purchased Facebook ads featuring Trump's image and the slogan 'Pray For Our President,' produced a podcast that amplified Trump's claims of a stolen election, and recently staged a strategy session for the 2021 elections that featured only Republican politicians."

According to Severns, "Trump's administration furthered the IRS' already hands-off approach to monitoring churches and other religious nonprofits to the point that enforcement now appears to be nearly nonexistent, giving Liberty and other groups new opportunity to test boundaries they couldn't have in the past."

Brendan Fisher, director of the Watchdog group the Campaign Legal Center, told Politico, "For someone like Falwell, who was eager to use tax-exempt resources to engage in politics, it may have given the green light. It's a correlation, but it certainly seems like you can draw a line between the executive order and Liberty ramping up its political activity in the years following it."