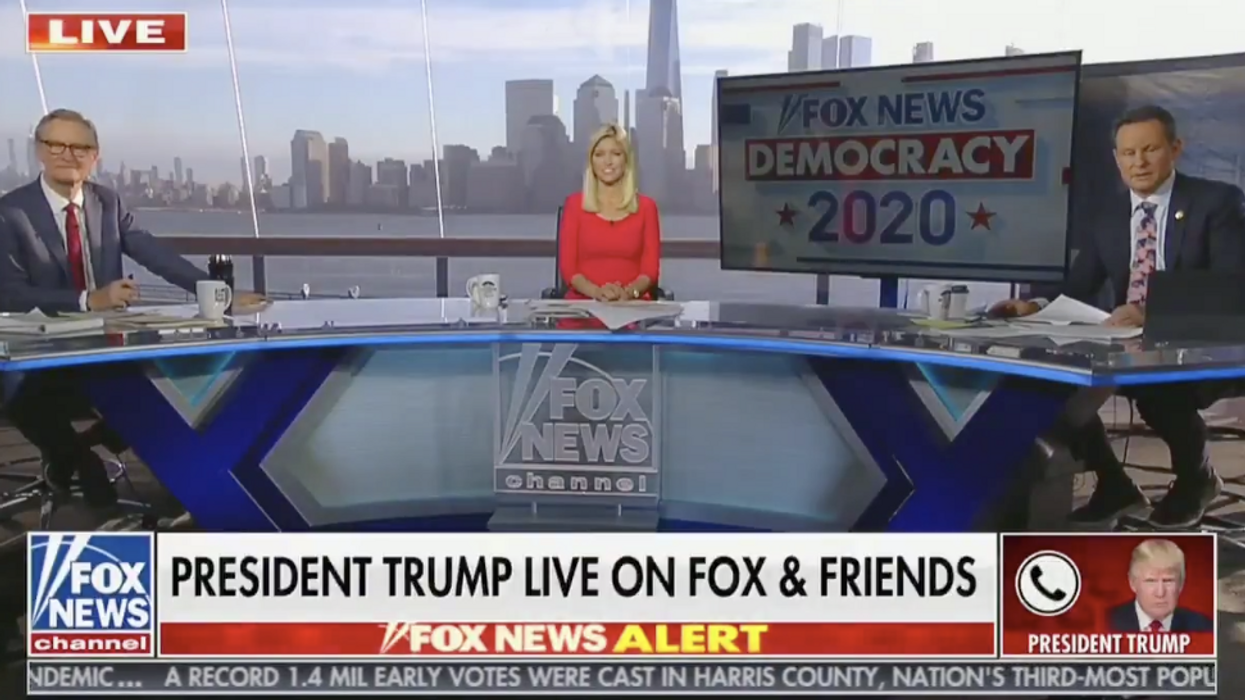 President Donald Trump was over half an hour late to his "Fox & Friends" interview the morning of Election Day.

As Fox and Friends waits for President Trump to call in this morning, I’m re-upping this story: Dr Birx sounded ala… https://t.co/NcjD4IBJzQ
— Yamiche Alcindor (@Yamiche Alcindor)1604406758.0

Fox 'n Friends stretching with Dan Bongino awaiting Trump's phone call. He was supposed to be on 45 minutes ago
— Kevin Liptak (@Kevin Liptak)1604407445.0

He began the interview trying to spin excuses for why he was going to win. His energy seemed low and his optimism strained, according to viewers.

President Trump was supposed to call into Fox News 30 minutes ago but hasn’t yet.
— Kaitlan Collins (@Kaitlan Collins)1604406818.0

Trump shockingly said that the U.S. is more difficult to handle than countries like Russia or North Korea. They're far more dictatorial than the United States, an issue Trump has had over the course of his presidency. For several months, Trump cited Article II of the Constitution as justification that he could do whatever he wanted as president without any checks or balances.

Trump bizarrely claims that "the US" is harder to deal with than Russia or North Korea, as though America is a fore… https://t.co/L4QSUAyVHt
— Aaron Rupar (@Aaron Rupar)1604408669.0

He also sought someone to blame, saying to Fox News' face that they're the biggest difference from four years ago. It sent hosts uncomfortably trying to defend the network.

Trump now complaining about how Fox has aired Obama rallies, even though Fox has been airing nearly all of his rall… https://t.co/UzkXAuuJLm
— Manu Raju (@Manu Raju)1604408740.0

Finally, Trump concluded he was going to win because "Look at the boats," he said, citing Boaters for Trump.

You can see the other responses from viewers below:

Donald Trump has just predicted he will win today by a substantial margin. He will "top" the 306 electoral college… https://t.co/flTCaRVNWl
— Tom Newton Dunn (@Tom Newton Dunn)1604409786.0

President Trump starts his Fox and Friends interview by saying his rally crowds have been "incredible" and he belie… https://t.co/LLA8pqv15K
— Yamiche Alcindor (@Yamiche Alcindor)1604407752.0

Trump's last pre-election Fox hit includes a lengthy debate with the hosts as to whether the network has been insufficiently nice to him.
— Philip Bump (@Philip Bump)1604408673.0

@ddale8 Low energy Donald Trump. He has become increasingly slower as the months have passed. Always projection with that con job.
— #MaskUpButtercup (@#MaskUpButtercup)1604410292.0