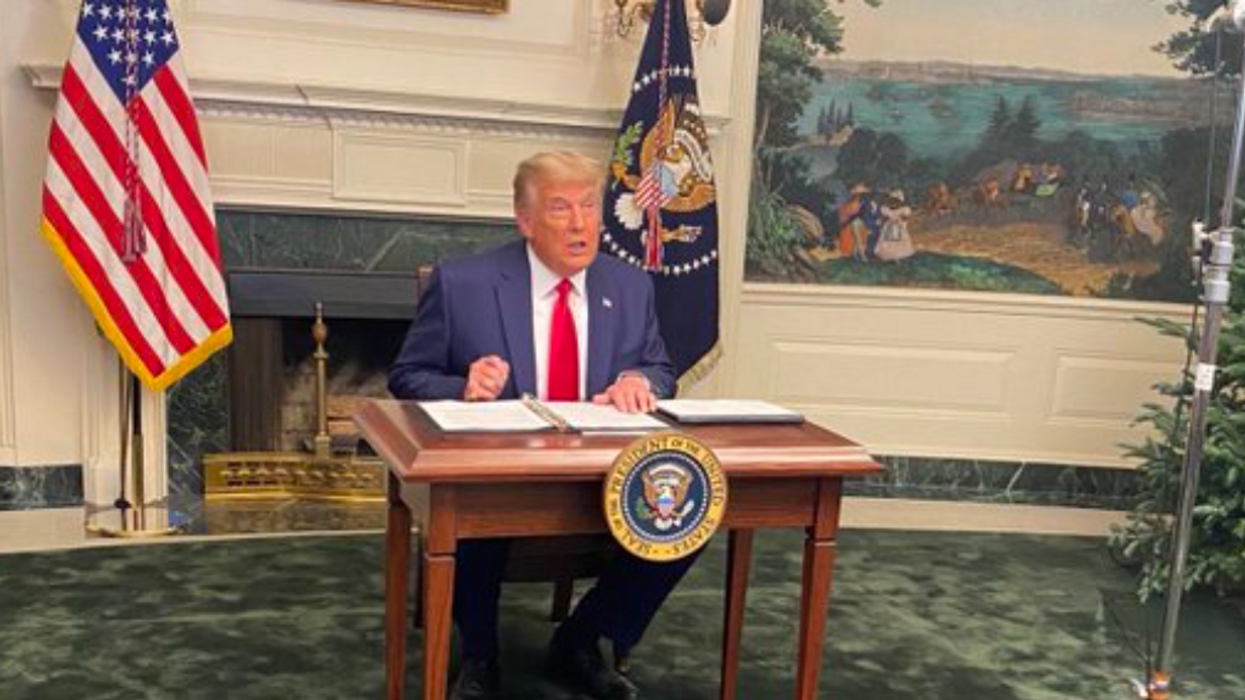 President Donald Trump's delivered a Thanksgiving Day address from behind an incredibly tiny desk, which garnered an array of comical responses from Twitter users.

In typical Trump fashion, the president spent his Thanksgiving Day focused on lashing out at reporters and spewing more falsehoods about the election results. However, viewers were more distracted by his tiny desk and how it made his temper tantrum appear reticent to the actions of a petulant child.

As photos of Trump's tiny desk began circulating on social media, Twitter users wasted no time weighing in and mocking the president. Trump's "elementary school desk" was the comic relief of Thanksgiving for many Twitter users.

One Twitter user wrote, "Trump is at the kiddie table of life… where he's always been and always will be. Always pretending to play big powerful grownup, but now dad's money is gone and he hasn't learned to generate any on his own merit. Trump's life is a warning."

@JuliusIrvington Trump is at the kiddie table of life… where he’s always been and always will be. Always pretendin… https://t.co/CWArNfyjQD
— Jonathan Reynolds (@Jonathan Reynolds)1606455462.0

May this be how we remember the Trump presidency: a baby at his tiny little desk throwing a tantrum https://t.co/T26DjF1fL4
— Parker Molloy (@Parker Molloy)1606438669.0

Although Trump made it appear as if he was working overtime for the holiday, other Twitter users also noticed he did not even have an ink pen in his possession.

Others offered Trump words of advice to ensure he won't be banished to "the kids table" in the future. "Maybe if you behave yourself, stop lying to undermine a fair election & start thinking of what's good for the country instead of whining about how unfairly you are treated, you'll be invited to sit at the big boy's table. #DiaperDon," actor Mark Hamill tweeted.

As the mocking continued, the #DiaperDon hashtag began trending. In fact, the hashtag even caught the attention of the president who fired back as he claimed the Twitter was responsible for creating "totally false trends"

On Thursday evening, Trump tweeted, "Twitter is sending out totally false "Trends" that have absolutely nothing to do with what is really trending in the world. They make it up, and only negative "stuff". Same thing will happen to Twitter as is happening to @FoxNews daytime. Also, big Conservative discrimination!"

Twitter is sending out totally false “Trends” that have absolutely nothing to do with what is really trending in th… https://t.co/B8DIPJ3eT7
— Donald J. Trump (@Donald J. Trump)1606450005.0

With a little less than two months left in the Trump presidency, his Thanksgiving address is likely the prelude to what Christmas will look like from the White House.