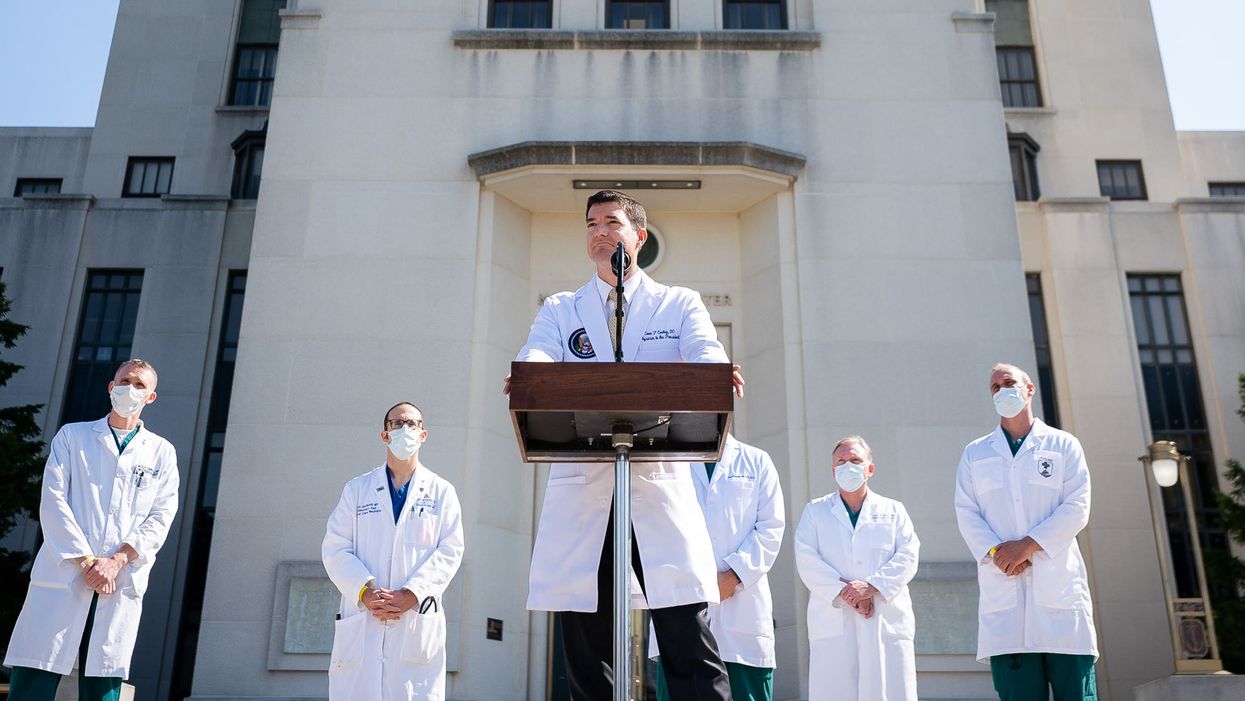 President Donald Trump will be leaving Walter Reed Medical Center after his admission for COVID-19, a team of his doctors led by White House physician Sean Conley explained on Monday.

"Though he may not be entirely out of the woods yet, the team and I agree that all our evaluations and most importantly his clinical status support the president's safe return home," Conley said. Trump has met all the hospital's criteria for being discharged, he said, and the White House itself has a fully staffed medical unit to monitor his progress at home.

Some medical experts were skeptical of this decision. Dr. Sanjay Gupta of CNN said, for example, that the steroids Trump has been prescribed are meant to reduce inflammation and can therefore mask his symptoms, even if he hasn't made genuine progress against the disease. It's also not clear how likely it will be that the president could continue to spread the disease when at the White House, and Conley would not go into details about the precautions that will be taken once Trump returns home.

But perhaps more notable than these concerns was everything Conley was unwilling to say.

All of this information could be crucial to understanding the president's health, but Conley made it clear the president won't disclose it.

The point about the date of the president's last negative test is critical for multiple reasons.The White House has said the president was tested daily for COVID-19 as a part of it precautions. They may be refusing to answer questions about the tests now because the president was not, in fact, tested daily, showing the White House to be negligent and lying. Or perhaps they're refusing to answer the question because Trump tested positive earlier than we knew, suggesting he recklessly traveled with the infection and risked spreading it to others. It's hard to believe that if, say, the president was tested negative for the virus Wednesday or early Thursday, only to test positive Thursday night, then they would be unwilling to say that publicly. So the silence on this point suggests they have something to hide.

Finding out the last time Trump tested negative could also be important for tracing his contacts. Conley said, however, that others were involved in the contact tracing effort and that he wasn't a part of it.

The condition of Trump's lungs and the possibility that he has pneumonia are also critical to understanding his decision to return home and the potential future course of his illness. Some patients experience debilitating and enduring effects from the virus, including scarring of the lungs. It's in the public interest to know whether the president's case is this serious, especially given that he is currently spreading dangerous misinformation about the virus and claiming he feels better than he has in two decades. Conley also declined to address other potential tests and scans the president may have undergone, citing the president's privacy.

This is unacceptable, and it's not a role a doctor should agree to play. Trump is using HIPAA as a shield to spin the the public about his health. A president should be complete transparent about the condition of their health as it could impact their ability to perform their job, especially when faced with an acute medical crisis like COVID-19. But instead of committing to transparency, the president has authorized his doctor to reveal the information that he wants to be public and concealed the information that he wants to keep secret.

It's akin to the way the president has used other authorities. His director of national intelligence recently released a document spreading an attack that is likely Russia disinformation again Hillary Clinton, while the administration is apparently concealing information about the Russian government's current attempts to influence the 2020 election. This is, undoubtedly, an abuse of power; he's using government authorities to selectively reveal information and mislead the public, which is not their function.

That's what Conley is doing, too. His selective briefings about the president's health are designed to paint a rosy picture for Trump while concealing information that, for whatever reason, he doesn't want the public to hear. It is, in other words, a cover-up. And no respectable doctor should play a part in it. A doctor should agree to be completely transparent with the public or instead keep quiet.