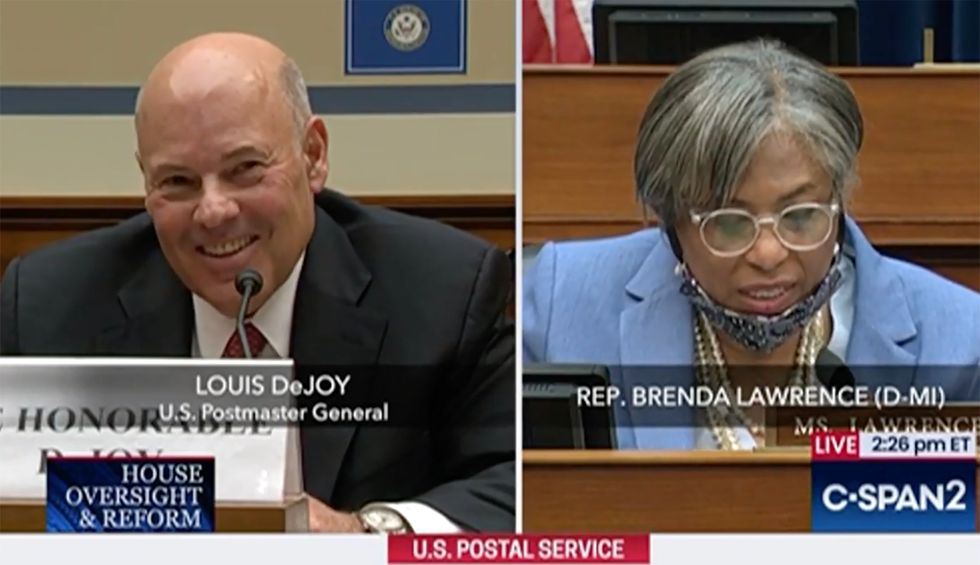 The country is in the throes of a pandemic, one exacerbated from the start by an incompetent and corrupt Trump administration. The continued lack of action on the part of Republican politicians, only willing to hand out taxpayer money to the rich, has continued to add to the suffering and anxiety going on around the country. This inability to do the bare essentials of running a government for the people by the people has led the rotted GOP to kick into overtime in their voter suppression tactics.

No place has this alarmingly anti-Democracy, anti-constitutional mechanism been more transparent than Trump and his Postmaster General Louis DeJoy dismantling of the United States Postal Service. On Monday, DeJoy appeared in front of the House Oversight Committee to discuss things like why is he such a liar and why, in an election year during a pandemic when voting by mail is essential to our country’s Democracy remaining a Democracy, has he taken apart sorting machines and refused to put them back into service.

One moment worth watching was when 30-year postal veteran and Democratic congresswoman from Michigan Brenda Lawrence, in a very calm and deliberate tone, questioned Postmaster General DeJoy about his oath of office, and more importantly, how exactly the policies DeJoy has implemented have hampered the work that thousands of postal workers across the country do.

Rep. Lawrence began by mentioning that she had requested to meet with DeJoy upon his appointment to the position of U.S. postmaster general, and how she had been told he was too busy to speak with someone with 30 years experience. She asked DeJoy, the postmaster general of the USPS, if he knew Title 39 of the U.S. Code. DeJoy sort of scoffed at that saying he did not. Of course, he should, seeing as it is the legal basis of his entire position of power in the United States government.

REP. BRENDA LAWRENCE: “The United States Postal Service shall be operated as a basic and sentimental service provided by the people, to the people by the Government of the United States, authorized by the Constitution, created by Act of Congress, and supported by the people.” Mr. DeJoy, did you take an oath of office when you became the postmaster general?

But this line of questioning is not simply to point out the obvious fact that Louis DeJoy shouldn’t be postmaster general of his own home, let alone our country’s postal service. Rep. Lawrence wants to point out that one of DeJoy’s “new initiatives,” called Expedited to Street/Afternoon Sortation (ESAS), seems to serve no other purpose than to waste people’s time while delivering a lot less mail to citizens. The basic program—which was stopped after a national uproar—means that no matter what mail has been sorted or not sorted, mail carriers leave their station at a very specific time early in the morning and return early in the afternoon. Any mail that didn’t get sorted in the morning should then be sorted for the following day.

It’s kind of a kick-the-can-down-the-road kind of program that doesn’t help the postal worker and slows down government operation. Quintessential Grand Old Party stuff. Lawrence explains that DeJoy needs to really do some “deliberate work” on thinking about this program. The problem with the program is that regardless of the “volume,” mail carriers must stop at every mailbox for which they have mail. So, leaving with less mail first thing in the morning, doesn’t necessarily equate to a shorter time in the field. In fact, it guarantees a slow down of mail sorting and much less efficient mail delivery.

Telling DeJoy that, “I have complaints in my office and people getting delivered one day a week now, sir. That is not according to your oath,” Lawrence finished her time by reminding the postmaster general that he swore an oath to the American people and he was not keeping up his end of the bargain.