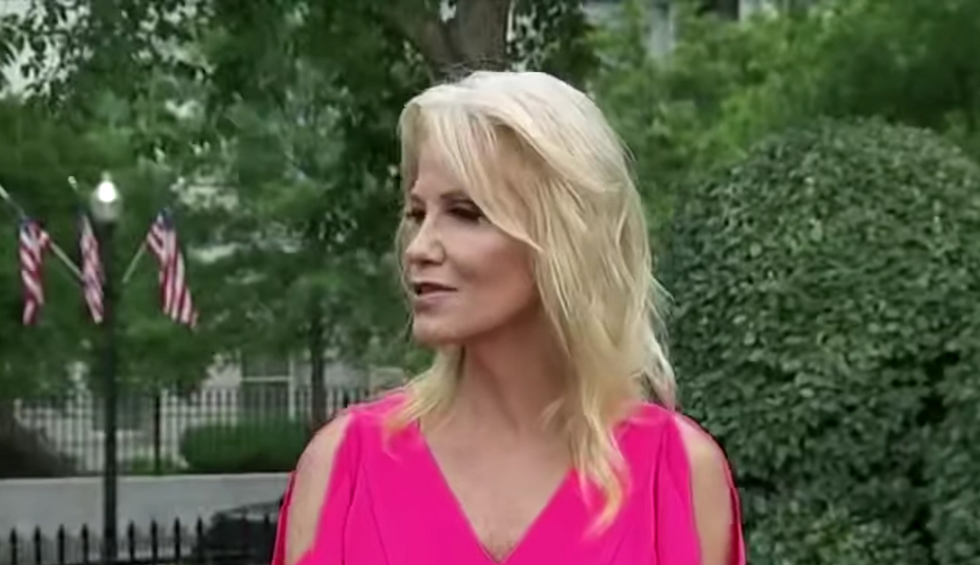 White House adviser Kellyanne Conway on Thursday lashed out at a CNN reporter who asked why President Donald Trump has not condemned a supporter who allegedly killed two people in Kenosha, Wisconsin.

Conway, who is leaving her job to spend more time with her family, was asked by reporters about the shooting of Jacob Blake at the hands of police.

“We’re generously resourcing and we’re deeply respecting those whose job it is to keep us all safe,” Conway explained, “who run toward the gunfire, who run into the burning buildings when we’re told to run out of them and run away from them. And I pray for the Blake family.”

CNN correspondent Joe Johns seemed to get under Conway’s skin by noting that an armed man who was charged with unlawfully killing two people at a Kenosha protest is a “supporter” of the president. According to BuzzFeed, Rittenhouse was seen in the front row at a Trump rally earlier this year.

“Is the president calling on his supporters in Kenosha — people like Kyle Rittenhouse — to stop the violence?” Johns wondered.

“The president wants everybody to stop the violence,” Conway replied. “And I know you’re trying to conflate that individual with President Trump and you really shouldn’t do that. Just like CNN shouldn’t have had a chyron last night that said ‘mostly peaceful protests’ with fire in the background. So, that’s pretty offensive, Joe.”

“What about vigilantes?” Johns pressed. “Come on. What about people who are out in the streets, who are supporters of the president?”

“Why are you talking about who they may vote for?” Conway interrupted. “Why are you trying to incite more trouble?”

“It’s been documented that there are a number of groups,” Johns explained before Conway cut him off again.

“Should we talk about the lunatic who shot up Steve Scalise and a bunch of other members of Congress three years ago?” she exclaimed.

“Or the guy who drove through the crowd in Charlottesville?” Johns said, pointing to a white supremacist who murdered a protester.

“You talk about that plenty but I don’t ever hear you mentioning the other guy,” Conway complained. “In other words, are we going to this game where we look at who somebody supports or what color hat they wear to a rally and somehow make us all responsible because I can do that. I can talk about lots of people who have been guests on CNN.”

“It would be pretty easy to say, ‘Hey, I don’t want my supporters participating in violence,'” Johns observed.

“He doesn’t want anybody participating in violence!” Conway insisted. “That’s why he is calling for law and order, respecting the police, saying, we’re not going to defund the police ever.”