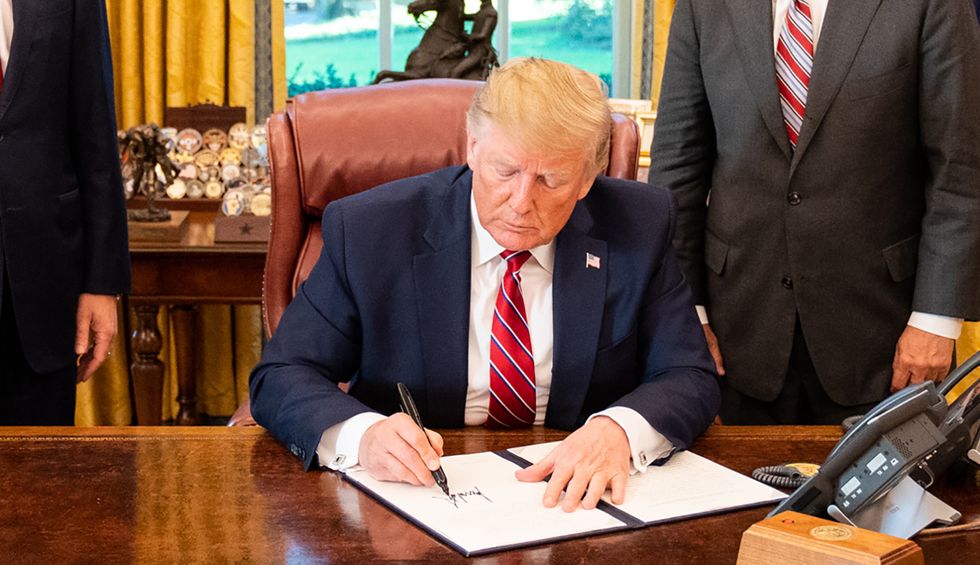 If you didn’t know, Donald Trump is golfing and hanging out with rich people in New Jersey this weekend, so of course, high on flattery, he’s holding media events. Saturday’s press conference took Trump away from the links for less than half an hour, ending abruptly when a CBS News reporter challenged the impeached president on one of his favorite falsehoods. The event centered around the signing of several sweeping “executive orders” which aim to bypass Congress and bankrupt Social Security, all under the guise of helping the nation navigate the prolonged COVID pandemic … while also, predictably, benefiting the wealthiest of Americans. Trump was sure to repeatedly blame Democrats for just about everything, and promised a dark future for a United States that fails to re-elect him to a second term.

It was an incoherent shitshow.

Trump, of course, is his most stunning when he’s off-book, and not in the “my eldest daughter is stunning” kind of way. Sure, the scripts that Trump’s handlers and yes-people write for him are not heralded for excellence in speechwriting, but there’s nothing like the rambling we hear when the gold-plated Republican is given a chance to freestyle. As Axios’ Jonathan Swan so deftly showed the world, the current chief executive is unable to mask that he has no clue what he’s doing or what he’s done. What he does know is that he hates Democrats and loves himself, and that he wants to stay president. With such a sparse foundation, it’s no wonder that Trump continues to stumble through his appearances, even when he’s speaking to a mostly-friendly crowd, like the one in red hats and golf shirts at Bedminster Country Club on Saturday.

Again, the “point” of this presser, at least on the surface, was to sign four “executive orders,” Trumps latest idea to address the seemingly endless suffering the coronavirus continues to inflict.

Trump said the actions would provide economic relief to millions of Americans by deferring taxes and, he said, providing temporary unemployment benefits. The measures would attempt to wrest away some of Congress’s most fundamental, constitutionally mandated powers — tax and spending policy. Trump acknowledged that some of the actions could be challenged in court but indicated he would persevere.

But, as The Washington Post notes, the EOs are basically just pretty books Trump got to write on with a big marker.

A leading national expert on unemployment benefits said one of the actions would not increase federal unemployment benefits at all. Instead, the expert said it would instead create a new program that could take “months” to set up. And Trump’s directive to halt evictions primarily calls for federal agencies to “consider” if they should be stopped.

Trump also mischaracterized the legal stature of the measures, referring to them as “bills.” Congress writes and votes on bills, not the White House. The documents Trump signed on Saturday were a combination of memorandums and an executive order.

As Politico notes, the EO to enhance unemployment isn’t all that it seems.

Trump also announced a $400-per-week supplemental payment for those who have lost their jobs, a decrease from the extra $600 unemployed Americans were receiving weekly before the benefit expired at the end of July.

States would be on the hook for covering 25 percent of the extra payments if they decided to extend them, Trump said. But those who opted in could use federal coronavirus relief funds to help offset the costs.

Why is @BarackObama constantly issuing executive orders that are major power grabs of authority? This is the latest http://t.co/4IVBckTE
— Donald J. Trump (@Donald J. Trump) 1341940270.0

Experts seem certain most of Trump’s Saturday Sharpie Show was just that: for show. In fact, most of the “executive orders” weren’t even executive orders.

“The President cannot create new money with an executive order. These EOs simply show the limitations of the President’s legal authority,” Jack Smalligan, a former official at the Office of Management and Budget (OMB) told The Washington Post.

But Trump’s performance was so much more than signing his name and showing the cameras. Politico described the rest of the event to be “akin to a campaign-style diatribe against his political opponents.” When he wasn’t bashing Biden for being “sleepy,” or lying about Veterans Choice, or blaming Democratic congressional leaders for holding “vital aid hostage,” or reframing the progressive left as extremists, or mocking the press, Trump was making vague promises and threats of what might happen if he loses on November 3.

The most disturbing part? The applause he received from those rich guys in golf shirts, even as he ran away like a coward.

If you’re not having a bad enough day, you can watch the entire press conference here.