What’s behind the extreme charges for 3 nonviolent protesters in Salt Lake City? 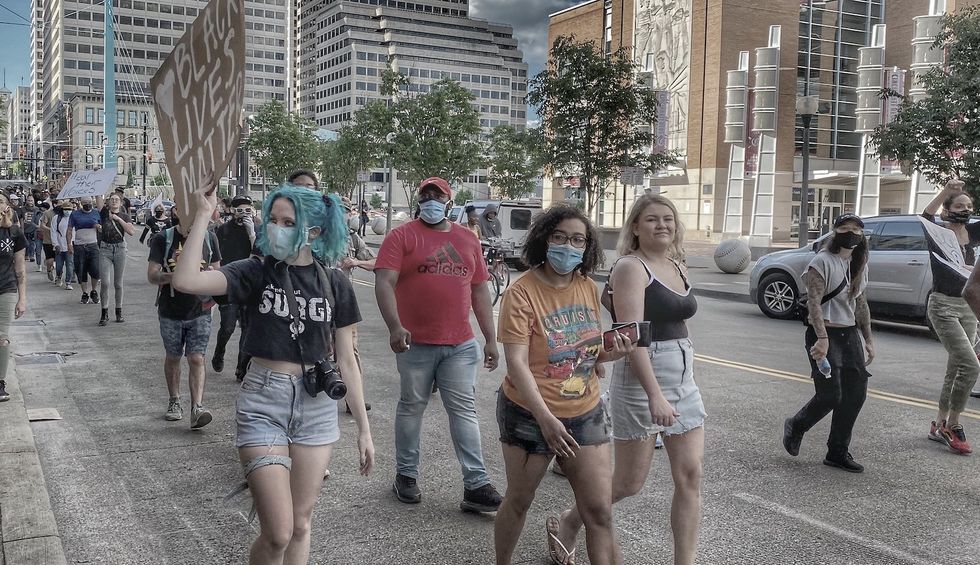 Salt Lake City is a world apart from the rest of Utah culturally and politically, and its choice of district attorney shows that—at least on a surface level. Sim Gill, first elected to the seat in 2010, has made some modest criminal justice reform moves, like expressing support for reducing the number of people on probation or court supervision. As a first-generation immigrant from India, he’s one of the few Asian-American elected prosecutors nationwide. Faced with a conservative Republican challenger in 2018, Gill emerged victorious by 14 percentage points.

However, DA Gill’s recent reaction to the vandalizing of his office shows a different, more vindictive side to him. In early July, protesters gathered to criticize Gill for refusing to indict the police officer who killed a young Latino man named Bernardo Palacios-Carbajal. A group of protesters allegedly painted “the road outside of the district attorney’s downtown Salt Lake City office and its facade red.” On July 28, three protesters, all women no older than 25, were charged with several criminal mischief and rioting felonies.

The local paper originally reported the criminal mischief charges as first-degree felonies, which carry a minimum sentence of five years in prison and a maximum of life under state law. However, there is no first-degree felony under the statute. Assuming the women were charged under the harshest provision under that particular criminal law, a second-degree felony, they would all be facing one-to-fifteen years in prison on just one of the charges filed.

Buildings and streets can be repainted. No violence was alleged, nor any threat of violence. So the worst that this incident represents is property damage. What was the DA thinking?

Unfortunately, Salt Lake County DA Sim Gill has a tendency to react this way when challenged. For example, when Utah County Commissioners were poised to create the state’s first commission on prosecutorial misconduct, Gill joined then-Utah County Attorney Jeff Buhman and others to decry it as a violative encroachment on prosecutors’ authority. Even though the commission would only have affected the Utah County DA office, and even though Buhman had a documented record of alleged misconduct and bullying of defense attorneys.

Gill’s defensiveness came in the context of his questionable ongoing political durability. In Utah County, the second-largest in the state, new Republican DA David Leavitt is just as “progressive” as Gill, if not more so. He ran as a pro-reform counterpoint to Buhman; after taking office, he has deprioritized drug cases, to the chagrin of many in the local law enforcement rank and file. These moves are braver to make in a place like Utah County, which has a much more traditional, tough-on-crime electorate than Salt Lake County. Meanwhile, Gill has refused to support marijuana legalization or the end to mandatory minimum prison sentences for drugs in his jurisdiction, the much more liberal Salt Lake County.

Then there were the revelations in a September 2018 Buzzfeed expose that at least four women were vying to use a state constitutional provision to initiate prosecutions against the men they accused of sexually assaulting them. All four were vocally disappointed that DA Gill’s office found their allegations unconvincing, and found an ally in University of Utah law professor Paul Cassell, a prominent victims’ rights advocate who represented one of the women in court. It was the kind of bombshell story that ends some elected prosecutors’ careers, though it failed to get much attention in the local press.

Gill, a registered Democrat, probably won reelection last time mainly due to the influence of partisan politics. A 2017 analysis found that nearly all of Utah’s Democratic legislators come from Salt Lake City and surrounding areas. In 2016, Hillary Clinton beat Donald Trump by nine points in Salt Lake County—a margine which likely would have been larger if not for Utah voters’ affinity for independent third-party candidates. By September, the partisan primaries were closed, and Gill’s only opponent was Nathan Evershed, his former deputy, who ran as a Republican without the advantage of incumbency.

Since winning re-election, Gill said that “justice reform” would be his main focus, which means that he is setting himself up for failure in 2022. Despite his occasionally announcing abstract support for a more humane and proportional justice system—especially the kinds of everyday cases that fall through the national media cracks—his promise belies the truth on the ground.

With criticism levied against him for not charging officers, Gill is again proclaiming support for reforms, this time squarely on the issue of police accountability. Ironically, Ian Adams, the leader of the Utah Fraternal Order of Police, was actually more believable when he said that Gill’s real police reform proposal is “to save Sim Gill’s job.” But perhaps some outcry over felony charges for three young, nonviolent protesters will make that harder than ever.