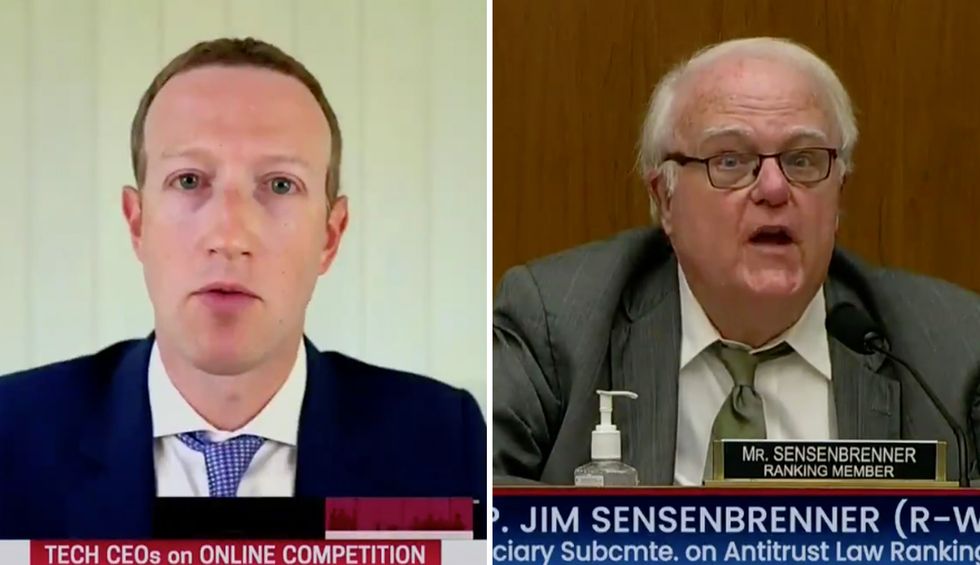 Zuckerberg was forced to correct the Congressman, who went on to falsely claim there is a valid debate about the efficacy of Hydroxychloroquine.

“It was reported that Donald Trump, Jr. got taken down for a bit of time, because he put something up on the efficacy of Hydroxychloroquine,” Rep. Sensenbrenner began.

“Now I wouldn’t take it myself, but there still is a debate on whether it is effective in treating or preventing COVID-19, and I think that this is a legitimate matter of discussion,” the Congressman, raising his voice, insisted.

The use of Hydroxychloroquine is not a legitimate matter of discussion. Studies show it does not prevent, cure, or assist in the treatment of COVID-19.

“It would be up to a patient and their doctor to determine whether Hydroxychloroquine was the correct medication, given the circumstances,” he continued.

“Why did that happen?” Sensenbrenner asked Zuckerberg, referring to Trump Jr. being blocked.

“Congressman, well, first to be clear, I think what you might be referring to happened on Twitter, so it’s hard for me to speak to that,” Zuckerberg responded.

Rep. Sensenbrenner and his staff got the question very wrong in many ways.

Aside from addressing the wrong CEO – he might have asked the CEO for Apple Tim Cook, about a Microsoft product – Donald Trump, Jr. didn’t just “put something up on the efficacy of Hydroxychloroquine.”

Trump Jr. posted a fraudulent video featuring a quack doctor (a Houston pediatrician and the spiritual leader of Fire Power Ministries) who believes demons exist and having sex with them is harmful.

“She also maintains,” The Washington Post reports, “that alien DNA is a component of some therapeutic drugs and that government scientists are developing a vaccine to prevent religious faith.”

And to be clear, there’s a lot more.

Those demons, she believes, the Post explains, “are responsible not only for diseases of the female reproductive system but also for male impotence, most financial troubles, marital discord and spiritual malaise.”

As far as the fraudulent claim that Big Tech is silencing or censoring conservatives, the tech columnist for the New York Times, Kevin Roose, daily tweets out the 10 top-performing link posts by U.S. Facebook pages.

Ben Shapiro and Dan Bongino are right wing extremists, for those unaware.

As you can see, CNN is the only mainstream media outlet on the list.

This is a pretty average day. Rarely do any progressive or liberal sites make the top 10 list, although in the past few days Occupy Democrats reached the top 10 a few times.

Here’s Sensenbrenner in today’s hearing complaining about “censorship” of conservatives:

Day in and day out Facebook's top posts are dominated by right-wing propaganda, and Republicans are still out here… https://t.co/uMN2HtDUcQ
— Aaron Rupar (@Aaron Rupar)1596046058.0