Americans react with glee to SCOTUS rulings as Trump asks: ‘Do you get the impression the Supreme Court doesn’t like me?’ 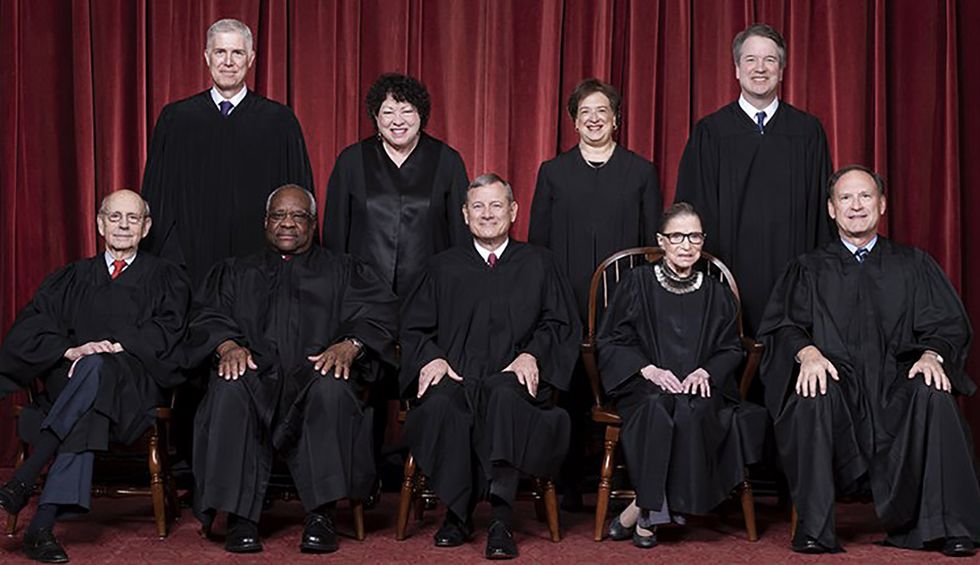 On Thursday, June 18, the U.S. Supreme Court ruled that the Trump Administration cannot proceed with its plans to roll back the Deferred Action for Childhood Arrivals program. The ruling, which will allow hundreds of thousands of “Dreamers” who were facing deportation to remain in the United States — at least for now — is inspiring a lot of discussion on Twitter. And President Donald Trump is clearly not happy with decision, tweeting, “Do you get the impression that the Supreme Court doesn’t like me?”

According to Twitter user @CathyGraphics1, “Trump is ruled by his disorders. You see it again with Bolton's book. By suing, he amplifies it. Against his interests. His paranoia, desperation, desire for retribution, and hypomania are all that's left now. This man is crazy!”

@Jeremynewberger posted, “I had thought they just hated bigoted xenophobes, but yeah maybe. Maybe it's a little of both.” And @itsJeffTiedrich wrote, “Shuffles the Clown is very sad today. it would be a real shame if #ShufflesTheClown trended all day, because that would make him even sadder."

@AhmedBaba_ asserted, “This is the President's response to the Supreme Court protecting 700,000 young DACA protected people and upholding equal rights in the workplace for LGBTQ people. Bigoted egomania.” And @Mmpadellan wrote, “The Supreme Court, America, and the rest of the civilized world CAN'T STAND YOU, Spanky. But hey, you still have Russia and Kim Jong Un and other murderous dictators, so there's that.”

@realDonaldTrump No, but I get the impression that the Supreme Court realizes that you are a danger to America, and… https://t.co/YJBQPf4cvb
— Dark Brandon (@Dark Brandon) 1592493094

@realDonaldTrump Shuffles the Clown is very sad today. it would be a real shame if #ShufflesTheClown trended all da… https://t.co/kuIseopFZO
— Jeff Tiedrich (@Jeff Tiedrich) 1592493135

@realDonaldTrump No, but I get the impression that the Supreme Court realizes that you are a danger to America, and… https://t.co/YJBQPf4cvb
— Dark Brandon (@Dark Brandon) 1592493094

Other Twitter users weighed in on the broader political ramifications of the High Court’s DACA decision.

Todays DACA decision by the Supreme Court is a wonderful affirmation of the values and principles that ACTUALLY mak… https://t.co/fDQKVASnx3
— Glenn Kirschner (@Glenn Kirschner) 1592490537

Politico’s Burgess Everett posted, “I fully expect some Republicans to complain about the decision but the reality that Congress doesn't have to address it, and the Senate specifically, is good news for a GOP that's always divided on immigration.”

Peter Maer described the ruling as a “major setback for Trump, who campaigned on end #DACA.”

@MarkMNYC wondered if the decision will be “good for Republicans in an election year that will be decided in swing states.” But @GatorRena noted that the Supreme Court’s decision might be only a temporary setback for Trump —especially if he is reelected. @GatorRena posted that the Trump Administration “can come back and file correctly and then it will all be over! Especially if orange is re elected.”

@10Gofficial cited the future of DACA as an example of why “we need” former Vice President Joe Biden “to win” in November.

@Mike_calamari, a self-described “union Democrat” pointed to Sen. Pat Toomey of Pennsylvania as a Republican who will benefit from the High Court’s decision politically but will still resort to fear-mongering over immigrants. @Mike_calamari tweeted, “I'm sure @SenToomey is relieved but it won't stop his fund raising on Fear Of Brown People.”

@BrainsAreOnFire posted, “Conservatives who only supported trump for his scotus picks about to be big mad.” And @GAKechnie asked, “Does Trump EVER win in court?”

@burgessev @5DollarFeminist I'm sure @SenToomey is relieved but it won't stop his fund raising on Fear Of Brown People.
— Mike Calamari (@Mike Calamari) 1592489846

It's not that Chief Justice Roberts is a closet progressive. He's not. It's that the Trump administration is *real… https://t.co/vkVn8h2G4c
— Steve Vladeck (@Steve Vladeck) 1592490469

Quick reading: DACA stands because Trump Regime's extreme incompetence in how it executes its cruelty forced Roberts to side with Democrats.
— David Rothschild 🌻 (@David Rothschild 🌻) 1592489677