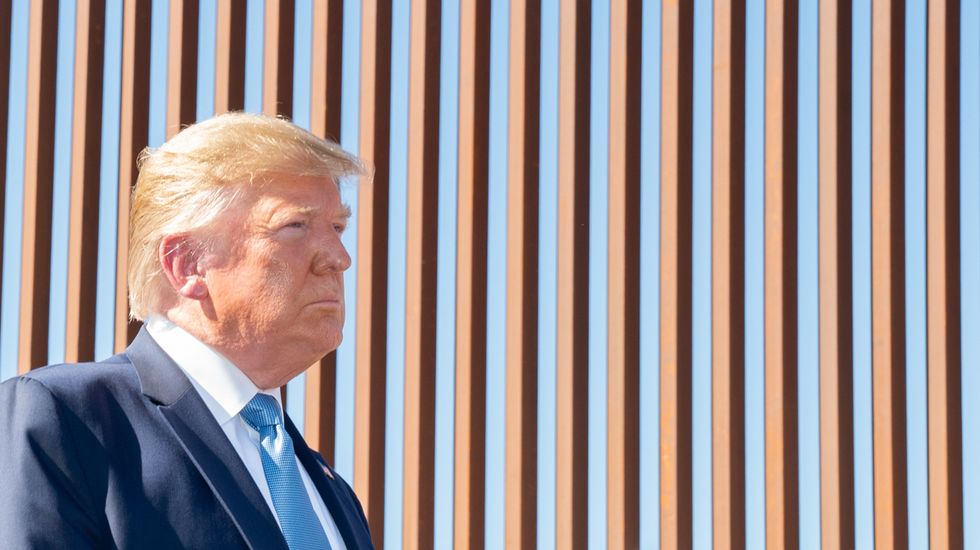 Big, high walls can be troublesome. Ask Humpty Dumpty. Or consider the Canaanite city of Jericho: According to a Biblical tale, its walls came tumbling down when Joshua and the Israelites encircled it and blew their horns.

However, for a real-life, epic story about wall troubles, ponder the trials and tribulations of our very own president. He trumpets that he is the most bodacious barrier builder of all, yet he can't seem to get his one "big, beautiful wall" funded or even taken seriously, much less built. Throughout his presidency, Donald Trump has continuously stamped his tiny feet and demanded that Congress shell out more than 10 billion of our taxpayers' dollars to erect a monster of a wall across some 2,000 miles of the U.S. border with Mexico. Like a flimflamming snake-oil peddler, he rants that his magnificent edifice would magically keep "aliens," "rapists," "murderers," "terrorists," "drugs" and "cartels" from entering the U.S. from the south. But even when his own party controlled both houses of Congress, the presidency and the courts, his grand scheme went unloved, unfunded and unbuilt.

Still, he kept insisting ... and persisting. In January, he directed his Customs and Border Control officials to put up a short section of his 30-foot-tall wall on the border at Calexico, California, to show the world how effective the Trump bulwark would be. Alas, though, the thing blew over! Not from a hurricane-force storm but from moderate winds topping out at only 37 miles an hour. The metal panels flung over into Mexico. Embarrassing.

More embarrassing was a personal visit Trump made to San Diego last September for a media event hailing a new supertech model of a wall that the master builder declared to be "virtually impossible" for violators to climb. Calling the design "amazing," he used a Sharpie to sign his name on the structure, declaring to the media: "I tell you this strongly: No more people can come in."

A month later, a climbing group in Kentucky built a replica of that wall and held an up-and-over competition. Winning time was 13.1 seconds! Sixty-five competitors easily topped it, including an 8-year-old girl and a guy who climbed it one-handed while juggling various items with his other hand.

Trump has, however, proven that one thing truly is impenetrable: his head. Absolutely no embarrassment, logic or factual evidence can enter his locked mind and deter his extravagant folly.

Remember when candidate Trump promised repeatedly that not only would he wall out all migrants crossing our Mexican border but -- by gollies -- he would also see to it that Mexico would pay the tab for his xenophobic wall?

Mexico hasn't paid a peso ... and won't. So, just as he did in building many of his luxury condos and resorts, Donald Dealmaker ran to the government, demanding that it pony up the unlimited billions of dollars for his pet political project.

But that's no hill for a narcissistic climber. Unable to get tax money legitimately, Trump has simply stolen it, reaching into the Pentagon's budget for military funding. Ignoring the constitutional mandate that only Congress is empowered to direct the flow of money from the people's purse, Trump filched $6.1 billion from our military last year, snatched another $3.8 billion this month and intends to swipe at least another $3.4 billion before the year is out.

This executive "reprogramming," as the White House euphemistically calls its daylight robbery, is being pulled off by masking Trump's wall obsession as a "national emergency." To fulfill the president's whimsical political desires, Pentagon brass has been yanking funds for military equipment and construction projects from the Army, Air Force, Navy, Marines, National Guard ... and, ultimately, from our fighting forces.

Presidential autocracy aside, Trump's massive larceny raises three other interesting issues of public morality. One: His trickery sets a precedent not only for future presidents but also for our young people's behavior. Two: Our Congress critters, especially Trump Republicans, set a new standard of craven meekness in the face of this direct assault on their authority and our democracy. Three: The Pentagon, by simply kissing off a budget loss of more than $13 billion, saying it's in excess of the military's needs, is admitting that the war machine is routinely taking away too much of the public's money.