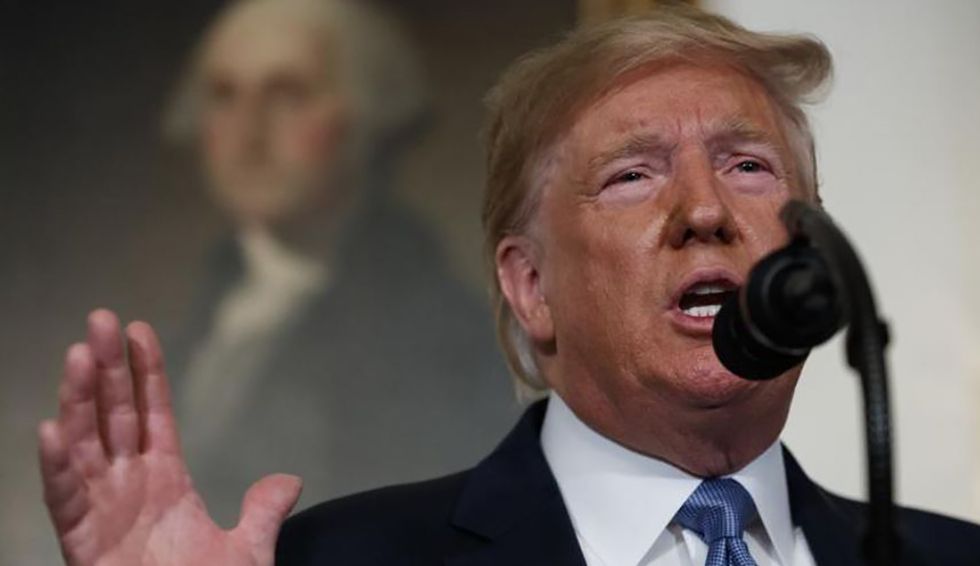 Abuse of power must be the label on a burgeoning dossier of complaints about Donald Trump as a president who would order subordinates to ignore congressional subpoenas, to steal money from one approved budget pot to build his Wall, to flaunt ethical protocols – and to do all those obstruction-like things outlined in the Mueller Report.

Now has come a mysterious new problem – a so-called whistleblower case alleging some kind of unidentified bad behavior from the top of the White House. From the descriptions of who is targeted, it seems to focus on Trump, his family, or someone within the top tier. Indeed, The Washington Post reported from sources that the complaint concerned an urgent matter relating to Trump promises to a foreign leader, most probably the prime minister of Ukraine.

By protocol, such whistleblower reports go to an inspector general – as they did. From there, the IG is supposed to let the Director of National Intelligence and the appropriate Congressional committees know – as he has not.

The inspector general says he has been told not to let anyone know about the whistleblower complaint – the who, the what or the target – but the White House itself.  For legal cover, the acting Director of National Intelligence, Joseph Maguire, called the Justice Department, which, dutifully, backed the decision to withhold the complaint from Congress. Maguire has been asked to appear next week before Congress.

So, without having all the facts, this appears to be Donald Trump deciding on what complaints, including possible criminal complaints, will be heard against himself.

Clearly, this is wrong on its face, and wrong by the spirit and word of the Constitution.

Under any reading, this is a prod to anger and disrespect for Trump. Try as I might, there is no circumstance here in which I can understand how this is acceptable presidential behavior.

Worse, as The Washington Post’s Eugene Robinson has noted, with the help of Senate Majority Leader Mitch McConnell (R-Ky.), Trump has rendered Congress all but impotent. So, even when Rep. Adam Schiff (D-Calif.) came forth with the existence of this whistleblower account earlier this week, the announcement is doomed to go nowhere.

Schiff claimed last Sunday that Maguire has rejected a subpoena to turn over the whistleblower complaint in order to protect an even higher-ranking official, possibly a top administration official or even President Trump.  “According to the director of national intelligence (DNI), the reason he’s not acting to provide it, even though the statute mandates that he do so, is because he is being instructed not to. This involved a higher authority, someone above the DNI,” said Schiff, chairman of the House Intelligence Committee.

“The Committee can only conclude, based on this remarkable confluence of factors, that the serious misconduct at issue involves the President of the United States and/or other senior White House or Administration officials,” Schiff wrote to Maguire.  While he said he couldn’t divulge the contents of the complaint, the fact that the DNI had cited “privileged communications” means that it would involve a “pretty narrow group of people.”

“So, I think it’s fair to assume this involves either the president or people around him or both,” Schiff said.

Schiff added that the complaint had been deemed “credible” by the inspector general of the intelligence community and that no director of national intelligence has ever refused to turn over a whistleblower complaint.

The Washington Post editorialized that “In the case of the intelligence-community whistleblower, this clearly falls under the definition of a legitimate task of Congress. Someone inside the intelligence community decided to follow the rules and filed this complaint for a reason. Neither Maguire nor Trump should be able to conceal such information. They should respect and uphold the law, not contravene it.”

Clearly, Schiff’s committee has been the lead group looking at the counterintelligence aspects of the all-things-Russia Mueller investigation, as well as a myriad of related probes into loans to the Trump businesses by foreign banks, unlawful leaking of classified data and contacts with Russians.

Eventually, this information will emerge, of course, whether through court actions overruling the White House or some effective Congressional action. As with every other issue, the Trump strategy remains to hide, hoping to run out the clock.