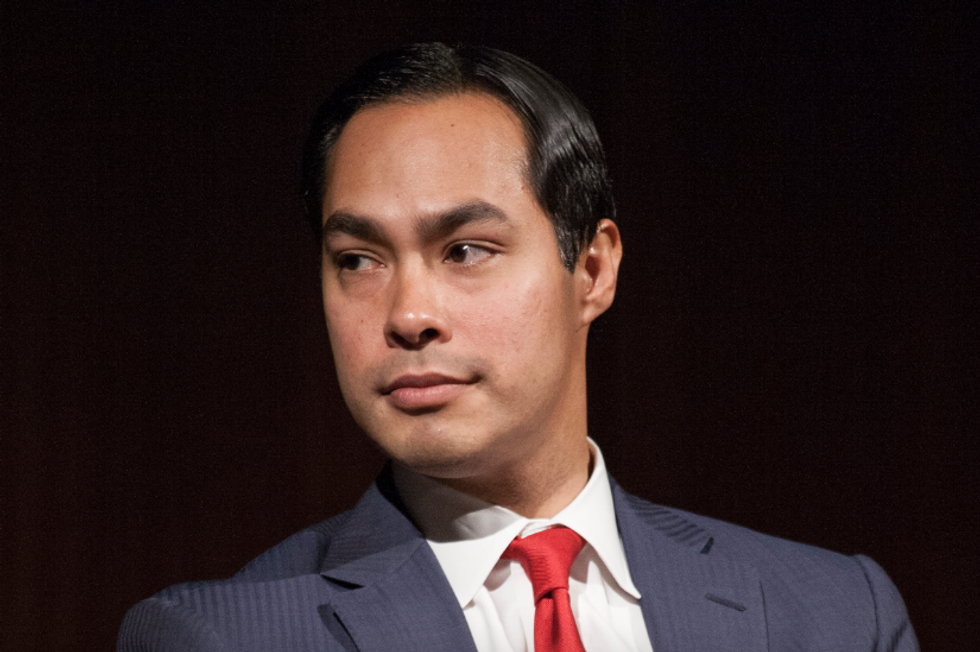 On Monday, Rep. Joaquin Castro (D-Tex.) tweeted out the names of the 44 people in his district who had given the maximum $2,800 donation to Donald Trump's re-election campaign. Conservatives naturally worked this into their sprawling victimhood complex, claiming that the release of the information, which is already available to the public with a few clicks at FEC.gov or OpenSecrets.org, would inevitably lead to Trump's biggest donors in San Antonio being harassed or becoming the victims of mob violence.

And many ostensibly neutral reporters, including The New York Times' Maggie Haberman, who has herself revealed the names of big Trump donors, took to the fainting couches right along with them.

The reaction among mainstream journos was annoying, if unsurprising, as it's a subtle form of normalizing Trump. Castro wasn't broadcasting the names of donors to some Republican with whom he has policy disagreements. Trump delivered a typically inflammatory speech down in El Paso in February and a few months later a white supremacist whose manifesto perfectly echoed his rhetoric drove ten hours to the border to murder some of those "criminal invaders." This is not about ordinary politics, and shouldn't be treated as such.

But if the normalization was galling, the idea that Castro stepped out of bounds is downright dangerous because it's consistent with and advances a longstanding conservative campaign to eliminate the last vestiges of campaign finance regulation.

For the past couple of decades, Republicans have insisted that disclosure and not regulation was the appropriate way to manage campaign spending. That, they said, balanced individuals' right to "speak" with their cash with the government's interest in preventing political corruption.

Senate Majority Leader Mitch McConnell (R-KY) had long advocated disclosure of campaign cash as a better alternative to regulation. For years, he called disclosure “the core of campaign finance reform.” But when McConnell gained control of the appointment process for the Federal Election Commission (FEC), he changed his tune, appointing commissioners who were known for their complete ideological opposition to campaign finance limits, including transparency requirements that remained on the books but which they refused to enforce. The FEC was effectively defanged.

But the conservative Justices on the Supreme Court continued to tout the power of disclosure as they dismantled the rest of our campaign finance regulation system. Craig Holman, a government affairs lobbyist for Public Citizen, said, “if you look at all of the Roberts Court's decisions that have addressed campaign finance, you'll see that each and every one of them has a statement in which the majority not only ruled that disclosure is fine, but they hinged their decisions on the very fact that there is full disclosure, that there is no dark money.”

In John Doe No. 1 v. Reed, the late Justice Antonin Scalia considered the possibility that disclosing donors might make them targets of harassment and dismissed the argument. "There are laws against threats and intimidation; and harsh criticism, short of unlawful action, is a price our people have traditionally been willing to pay for self-governance," he wrote. "Requiring people to stand up in public for their political acts fosters civic courage, without which democracy is doomed."

But ACLU attorney Joshua Block noted on Twitter that "this is an area where swapping Scalia for Gorsuch and swapping Kennedy for Kavanaugh may have dramatically changed things."

For years, the right has been advancing a legal argument that the government's interest in fighting corruption should not outweigh donors' interests in remaining anonymous, and the idea that hordes of outraged villagers would swarm their McMansions with pitchforks has been central to that effort.

University of Michigan legal scholar Sam Bagenstos noted on Monday that "for at least a decade, [conservative opponents of disclosure laws] have loved to cite NAACP v. Alabama, as if revealing the names of campaign donors today is at all like revealing the membership lists of the NAACP in Alabama in the 1950s." In that 1958 case, The Court ruled against an Alabama law requiring the NAACP to disclose its members at a time when doing so might get them lynched. Using that decision to justify preventing fat-cat donors from paying a social cost or facing some sort of consumer action is perverse.

If the conservative argument prevails--which is far more likely when neutral reporters embrace the spin that Trump's big donors are physically endangered by transparency--it will justify eliminating the last remnants of our campaign finance limits. And it's not just about individual donors. Corporations are highly sensitive to disclosure. They want customers from across the political spectrum, and while they may back a candidate for his or her business-friendly policies, they often do not want to be associated with that candidate's views on other matters, especially on social issues like LGBTQ rights.

Castro only released the names of Trump's maxed out donors in his district, people who can afford to give $2,800 now and another $2,800 after Trump officially becomes the nominee. They enjoy a disproportionate amount of influence over our politics. And the members of their community should be able to hold them accountable for supporting a politician whose demagoguery inspired a major terror attack in their state.

The media's ready acceptance of the right's spin on incidents like this just moves us one step closer to the GOP's dream of elections being fought with unlimited sums of completely dark money. It's inexcusable.

If money is speech, the person who gives the maximum allowable campaign contribution is standing in the public squa… https://t.co/633xJKvM1U
— Lindsay Beyerstein (@Lindsay Beyerstein)1565152561.0