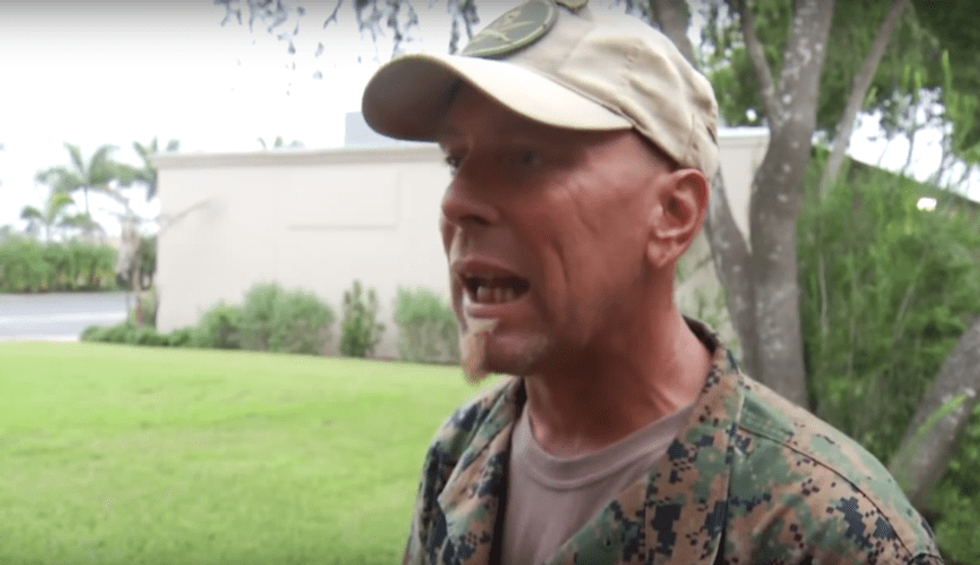 A Texas militiaman who led a border-watch operation and was later convicted in 2015 on federal weapons charges has announced that he is becoming a fugitive after a warrant was issued for his arrest—and is vowing that he won’t be captured again.

Kevin Lyndel “KC” Massey, a 53-year-old from Quinlan, is the subject of a Federal Marshals Service warrant issued last week naming him “Most Wanted,” and warning that he is “armed and dangerous,” and moreover “has reportedly made threats to kill law enforcement that attempt to arrest him.”

It appears he intends to make himself a martyr to the “Patriot” cause in the mold of LaVoy Finicum, the Utah man shot in January 2016 by Oregon State Patrol officers after he refused arrest related to the armed standoff at the Malheur Wildlife Refuge.

KC is done playing the game of unconstitutional courts that already cost him 3+ years in federal prison for not even violating the law as written. The judge said in his statement, that the conviction was based on court precedent not on the written letter of the law. The feds continued to subject KC to their tyranny after release from prison, while serving a double jeopardy sentence of 3 years probation. KC is NOT going to allow himself to be kidnapped again. Death before dishonor!

Massey was arrested in 2015 by federal agents at the Mexico border, where he had been involved in an ongoing effort by a group of “Patriot” militiamen to prevent crossings by would-be immigrants at the Rio Grande. The group—who called their operation “Camp Lonestar”—was among the first such militias to actually detain border crossers with wrist ties and hold them for detention by Border Patrol.

The first arrest at the camp occurred when a participant named John Frederick Forrester, also a convicted felon, had an encounter in the brush with a Border Patrol officer that drew the agent’s gunfire. When more federal agents arrived to pursue a tip that Forrester was not the only armed felon in the camp, they found Massey—who had a 2003 conviction on his record—also in possession of a gun.

Massey had become the chief media spokesman for Camp Lonestar, which had begun operating initially under a veil of secrecy. As is inevitably the case with such operations, rather than actually clamping down on illegal crossings, the group’s presence actually just complicated an already difficult situation. It also fairly dripped with conspiracist paranoia.

Camp Lonestar was particularly notable for its harassment and detention of would-be border-crossers. In one video, the militiamen could be seen rounding up a group of immigrants and holding them for Border Patrol. Massey posted an explanation on Facebook afterwards: “Sorry we had to ‘Detain’ them,” he wrote in a comment. “[B]ut they were wore out and just fell down and gave up while the other 7-8 ran like gazelles!”

As the post explained, the militiamen detained the people—described as Honduran, Guatemalan, and Mexican—after they encountered a group of about 11 border crossers, most of whom took off through the brush. The three men they kept were “ziptied, debriefed, and given water,” and U.S. Border Patrol officers eventually arrived and took them away.

“WE DO NOT AIM TO DETAIN, we would much rather send them back into the river into Mexico and dissuade them and the cartel from crossing on the property we patrol,” the post explained. “All encounters were conducted in a humanitarian, professional fashion. Stay vigilant. Thank you for your support.”

But behind the guise of humanitarian treatment was a not-so-subtle smirking contempt. “One of the guys pissed himself!” remarked Massey. Another chimed in, “Dude pissed himself bad.”

Massey, the camp’s “commanding officer,” had appeared in numerous videos posted on Facebook and elsewhere that showed the activities involved in Camp Lonestar. They also featured their rationalizations for harassing people at the border: “I’m not anti-immigration,” he told reporters. “I have no problem with immigrants. I have a problem with terrorists. I have a problem with people who are coming to this country to hurt my fellow Americans and to destroy my fellow Americans’ property and livelihood.”

After Massey’s arrest, Camp Lonestar largely crumbled apart and ceased operation. The landowner whose property they operated from, Cuban “Rusty” Monsees, later told reporters that the experience “wasn’t that great.” “They jeopardized my safety and some other people’s safety by what they were doing,” Monsees said.

Massey pleaded guilty in September 2015 to the federal weapons charges and servedthree years in prison. After his release, he remained on parole, but continued to claimthat he had been unjustly prosecuted. The conditions of that parole appear to have led him eventually to revolt, which in turn brought the most recent warrant for his arrest.

One of Massey’s supporters penned a blog post suggesting that Massey was now following Finicum’s example of deliberate martyrdom:

One thing I do know, like LaVoy, he will live to his last day out in the open, not in a cage...I don’t know about anyone else reading this but I don’t want another good patriot killed because the government didn’t want their dirty secrets revealed or the “virus” known as the Constitution spreading.  I refuse to lose another good friend.  I will do everything in my power to keep that from happening.

Commenters on Facebook not only supported this view, but suggested that Massey’s case might inspire a larger revolt. “10s of thousands doing the same thing only way this stops is if any and all moron parasites and workers for them are removed every attempt they make to steal lifes time or property they should at no time ever be allowed past to do it to another,” one of them wrote.

Another suggested that a team armed militiamen should intervene on Massey’s behalf, saying that “a team of solid mother fuckers need to grow a pair and hear his story and decide if they will help if not he will be killed in cold blood or put in prison its that simple a facebook set of balls will do nothing,” he wrote.