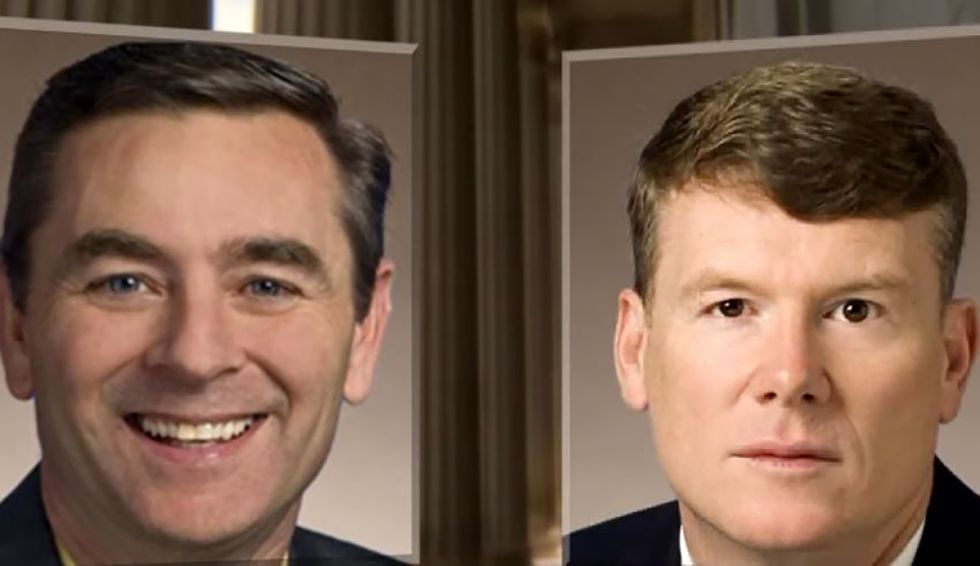 “The Dog and Pony Show,” a local political site by Cari Wade Gervin, claimed to have caught the Republican on the gay dating and hookup app Grindr, LGBTQ Nation found.

The site noted that Grindr accounts are very easily faked, but Gervin investigated the account and compared the phone number to Sanderson’s; they match.

“The Grindr and text messages I have seen do appear to be authentic,” wrote Gervin. “They use Sanderson’s real cell phone number. Sources confirm having been told about the messages at the time by their friends who received them. And one man I interviewed said he met Sanderson at his farm in Kenton.”

Sanderson listed a fake name, “Brian,” and describes himself as being “in an open relationship.” He’s sent photos of his nude torso and genitals, asking men to call him. The phone number he gave went to his winery, the White Squirrel Winery.

“I’ve seen a lot and done a lot, but I really haven’t had a connection with a guy, and I have a burning desire to have that relationship. I like down, and dirty guy to guy play too! So, I guess you might say, nothing will be held back …” his profile reads.

Sanderson swore that the photos were faked, made using those from his Facebook.

The Republican resigned Wednesday, saying that he wanted to focus more on his winery. He also indicated the resignation was partly due to being “outed” for his same-sex encounters.

This isn’t the first time, however. In Jan. 2014, a gossip blog posted alleged messages Sanderson sent to a young Vanderbilt student where he called himself a “state rep” for Obion, Lake and Dryer Counties, which is his district.

“[Sanderson] says he was not in an open relationship and told me that if I published this story, it would ruin his marriage. He denied being either bisexual or gay or having ever sexually touched a man,” Gervin also wrote.

She noted that she’s spoken with an unnamed University of Tennessee Martin student who “connected with Sanderson on Grindr several years ago when he was 19.” The student described a date at the winery where Sanderson gave him a tour, tasting, and take-home wine, despite not being of legal age. That’s when things got sexual.

Sanderson began massaging his shoulders and “otherwise hit on him in a manner that made him feel uncomfortable,” the report revealed. “He was pressured by the legislator to make up a story on the fly about why he was on the property.”

Sanderson has voted against LGBTQ policies at the state level during his term in the statehouse. The state passed a bill preventing cities from adopting anti-LGBTQ discrimination ordinances. He also denounced the Supreme Court after they ruled that same-sex marriage bans were unconstitutional.

You can read the full story here.