The 'civility' double standard: Here's why Republicans demand it for Dan Crenshaw — and not Ilhan Omar 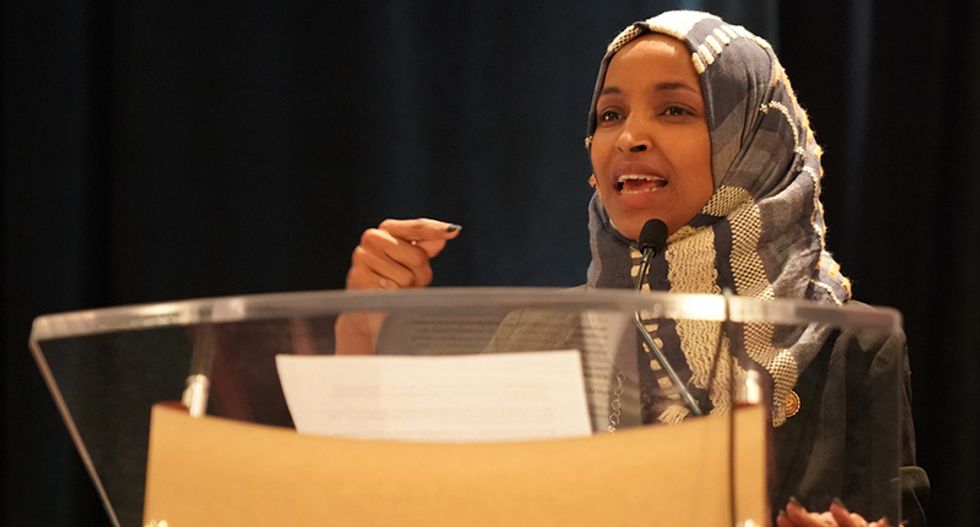 Much has been made of the deep political divisions in the United States and how bitter and angry the country’s political climate has been in the Trump era. One often hears that there needs to be greater “civility” in political discourse. But New York Magazine’s Zak Cheney-Rice, in an April 17 article, argues that there is a major double standard when it comes to calling for more political “civility” in the U.S.—and that Republicans are enjoying an unfair advantage over Democrats in the “civility” debate.

Cheney-Rice uses the recent controversy surrounding Rep. Ilhan Omar as an example. The Minnesota congresswoman, a Somali immigrant and Muslim, became the target of right-wing Islamophobia after asserting that the 9/11 terror attacks have been used as a pretext to vilify Muslims in general. Many Republicans responded angrily, claiming that Omar made light of the worst terrorist attacks in U.S. history — which, as Rep. Alexandria Ocasio-Cortez asserted in defense of Omar, she didn’t. Saying that the horrors of 9/11 shouldn’t be used as an excuse for abusing Muslims in general is not making light of the attacks.

Rep. Dan Crenshaw of Texas was among the many Republicans who was quick to criticize Omar for political gain, and when Ocasio-Cortez called him out, Rep. Andy Barr of Kentucky accused her of incivility.

Ocasio-Cortez criticized Crenshaw on Twitter for having “the audacity to drum resentment towards Ilhan” using “completely out-of-context” quotes. And the congresswoman, who represents parts of Queens and the Bronx, noted that “in 2018, right-wing extremists were behind almost all domestic terrorist killings” in the United States—and those right-wing extremists weren’t Muslims. Ocasio-Cortez also criticized Crenshaw for voting against funding for the 9/11 Victims Compensation Fund.

After that, Barr sent Ocasio-Cortez a letter asserting her “recent comments about Congressman Crenshaw demonstrate a lack of civility that is becoming far too common in the U.S. House of Representatives.” And Barr’s call for more civility on Ocasio-Cortez’s part, Cheney-Rice writes, underscores the double standard that is benefitting Republicans.

Cheney-Rice explains, “Ocasio-Cortez’s incivility, in Barr’s view, stemmed from her claim that Crenshaw has done little to support 9/11 victims or curb right-wing domestic terrorism, which of late has killed more Americans than any other kind.” Barr told Ocasio-Cortez that Crenshaw had fought terrorism in the Middle East as a NAVY Seal, but as Cheney-Rice points out in his article, AOC was specifically addressing domestic terrorism.

“Enlisting in the armed forces has little to do with combating white-supremacist extremism domestically—which, on the contrary, has found plenty of foot soldiers among both active and former service members,” Cheney-Rice writes. And the journalist goes on to say, “Ocasio-Cortez was not taking Crenshaw to task merely because she enjoyed it. She was denouncing a colleague who had warped another colleague’s words to cast her as a terrorist sympathizer.”

Crenshaw, Cheney-Rice writes, “embraced” an “Islamophobic line of attack,” adding that “there is little doubt that doing so has material implications: Omar has said that she receives regular death threats, and the FBI recently arrested a New York man for threatening to ‘put a bullet in her fucking skull.’”

Cheney-Rice concludes his piece by stressing that the lack of civility in recent days hasn’t come from Omar or Ocasio-Cortez — it has come from Crenshaw and Barr.

“If there was any dishonesty or maltreatment from one colleague to another at play here, it was that of the Texas congressman against Ilhan Omar,” Cheney-Rice stresses. “But good-faith interpretations of a Democratic colleague’s remarks do not fit Barr’s rubric for civility. It is for this reason that his conception of the term is useless, except as a political cudgel for him to use at will…. Bad-faith outcries about civility aimed at deflecting from Republican misdeeds are the order of the day.”