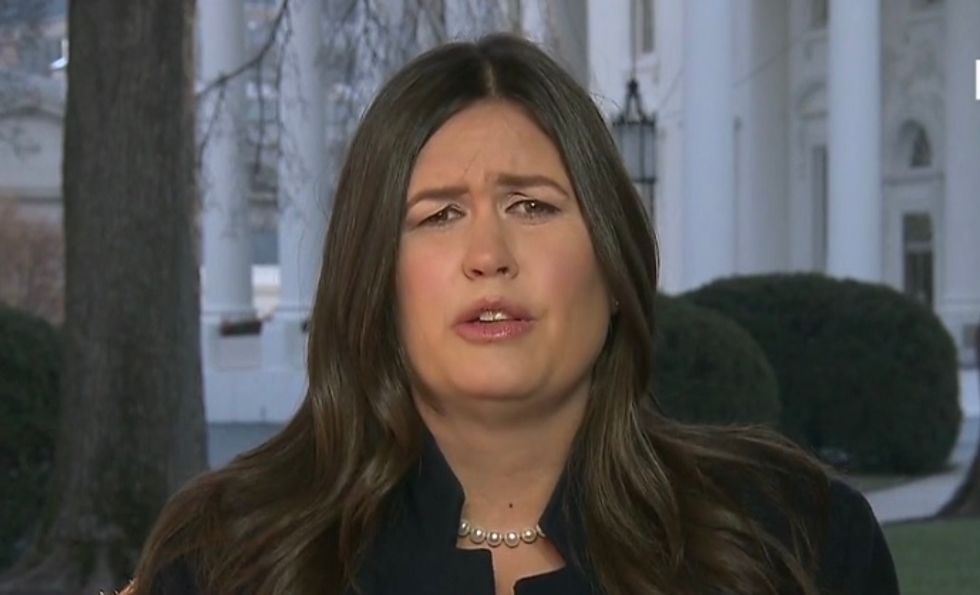 White House Press Secretary Sarah Huckabee Sanders appeared on CNN to discuss the arrest with John Berman, and from the very beginning she was cagey and flustered, insisting none of this had anything to do with the president and asking why, if CNN had covered the WikiLeaks emails, they weren't also guilty of collusion.

One of the most astonishing moments, however, was when Berman asked Sanders whether Trump himself had directed Stone's scheme — and she refused to deny it.

"Let me read you a paragraph from this 24-page indictment," said Berman. "It says, 'After the July 22, 2016 release of stolen DNC emails by Organization 1 — that's WikiLeaks — a senior Trump Campaign official was directed to contact STONE about any additional releases and what other damaging information Organization 1 had regarding the Clinton Campaign...' The question is, a senior Trump campaign was directed by whom to contact Roger Stone? Did the president direct someone to contact Roger Stone about stolen emails?"

"Look, John, I'm not an attorney," said Sanders. "I haven't read through that. Even if I had, I'm not going to be able to provide you some type of insight or legal analysis. What I can tell you is that the specific charges that have been brought against Mr. Stone don't have anything to do with the president. If you want to get into the weeds on that—"

"It's not the weeds," interrupted Berman. "We only know if it had something to do with the president when we know whether it was, in fact, then-candidate Donald Trump who directed a senior Trump campaign official to contact Roger Stone. Do you know whether that individual was the president?"

Again, Sanders refused to answer. "Look, I know that the charges are about whether or not he gave false statements, and that's on that individual. That has nothing to do with the president."

Sanders repeatedly denied that the Stone indictment had anything to do with Trump. But she repeatedly refused to answer the question at the heart of the matter: was Stone's collusion with WikiLeaks, and his subsequent lies to investigators and threats to witnesses to cover it up, done at Trump's direction?

If she cannot answer that, she cannot say the indictment is unrelated to Trump. And the fact that she does not want to go near that question is an ominous sign for the president.