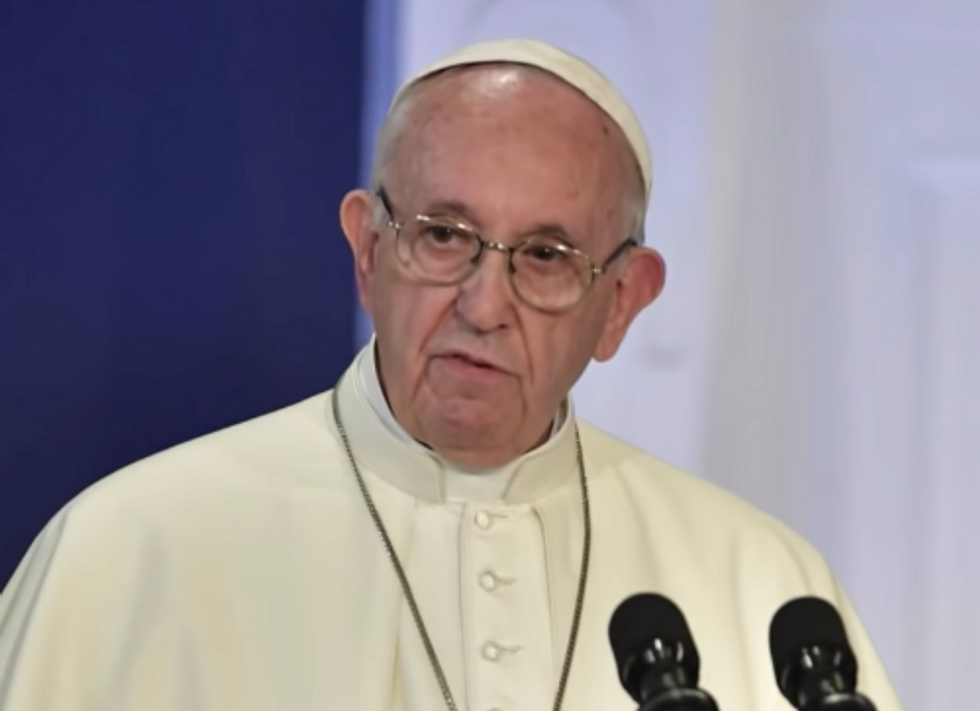 The Conversation
August 27, 2018 The Right Wing

A grand jury report recently found shocking levels of child sex abuse in the Catholic Church. It uncovered, in six dioceses, the sexual abuse of over 1,000 children and named 301 perpetrator priests. It also found that religious officials had turned a blind eye to the abuse.

In response, Pope Francis, head of the Roman Catholic Church, wrote a letter addressed to â€œthe People of God,â€ saying,

â€œWith shame and repentance, we acknowledge as an ecclesial community that we were not where we should have been, that we did not act in a timely manner, realizing the magnitude and the gravity of the damage done to so many lives. We showed no care for the little ones; we abandoned them.â€

The fact is the pope has the power to ensure that this does not happen again. As a scholar of the Catholic Church, I believe an important but often poorly understood reason for the abandonment of abused children is the Churchâ€™s Code of Canon law, which the pope alone can change.

Canon laws govern the church and lay out its theology. All Catholic religious officials are bound by them.

Canon law has a complex history. It originated in early Christian communities. Christians, building on the Gospels and other sacred texts, developed norms and rules about acceptable practices and behavior, including wrongdoing by clergy. Christian communities usually had rules against religious officials sexually abusing children. They were harsh on sodomy. Punishments could include being smeared with spit and bound in iron chains.

As Christian communities spread throughout the Mediterranean region in the third century A.D., regional meetings were held to discuss rules that could be applied uniformly.

By the fourth century A.D., Christian churches, usually through councils, started issuing authoritative rules accepted by all Christian communities. These came to be called â€œcanons.â€ The most well-known were those of the Council of Nicaea, convened by Emperor Constantine in A.D. 325.

The enforcement of the canons was put in the hands of church bishops.

As Christianity spread east and west, it struggled with rulers who wanted to control peoples and territories. Diverse rules and norms proliferated. At the same time, over many centuries, various religious leaders and theologians tried to create a uniform system.

It was not until 1917, under Pope Benedict XV, however, that the Church consolidated and revised the many different rules in Western Christendom. This was titled the Code of Canon Law, applicable to all Roman Catholic churches. Only the pope could issue or change canon law. The Orthodox, or â€œEastern rite,â€ churches have a slightly different set of laws.

The Church sometimes turned errant priests over to civil authorities.

That changed in the late 19th and early 20th centuries, when Church-state battles flared in Europe as secular states rejected the churchâ€™s claims to sovereignty. The Church made the handling of clergy child sex abuse an internal matter.

The 1917 code was revised in 1983 to take into account changes stemming from the Second Vatican Council, an assembly of Roman Catholic bishops meant to settle doctrinal issues, held between 1962 to 1965. Both versions of the code include canons about sex abuse.

Here is how canon law changed over the years.

Since 1917, the church dealt with accusations against sexual abuse of children through rules that barred priests from soliciting sex when they were in the confessional.

If priests, when taking a confession, solicited sex, they were viewed as having committed a particularly egregious sin. The confessional is a sacred space and confession a sacred act.

What is noteworthy here is that the concern was about the priest sinning, not about abuse being perpetrated on another. Also, the 1917 code did not have any canons that dealt with sex abuse outside the confessional or sex abuse of minors.

In 1922, the pope issued a set of guidelines, formally called an instruction. It tried to deal with cases in which the priest did not directly solicit sex during confession. Clerical sex abuse of minors was a crime if the act was somehow associated with the sacrament of confession.

From 1922 onward, investigations of clergy suspected of sexually abusing children were to be cloaked in secrecy. This limited bishops from reporting cases to the police, or even to parishioners.

But it was only in the 1983 code that child sex abuse was listed as a crime within the canon about clergy violating their obligation to not have sex. The new code gave the Vatican extensive control over the fate of accused clergy.

There was more. A canon about avoiding â€œscandalâ€ compounded the secrecy issue. It was a sin, and a violation of canon law, to do anything that would cause â€œscandalâ€ to the faithful by leading them to sin or question their faith.

If a bishop, for example, were to make known that a priest had sexually abused children in his diocese, the bishop, and not just the priest, would be guilty under canon law of causing scandal â€“ because information about the abuse might cause Catholics to question their faith â€“ as indeed, it often has.

Also included was a requirement that bishops provide priests with funds when the priests were removed from ministry, but not dismissed from the clerical state (not â€œlaicizedâ€ or â€œdefrockedâ€).

Thus, what to Catholics and those outside the institution looks like the morally dubious practice of paying child sex abusers is to the hierarchy a fulfillment of their obligations.

Under the 1917 code, bishops, under certain conditions, could dismiss priests from the clerical state, and without a canonical trial. But it could be done only after it was determined that there was no possibility of reform.

If a priest claimed his abuse was due to pedophilia or other psychological disorders, canon law provided for a more lenient punishment. The priest could be regarded as not being fully responsible for his actions.

The 1983 revision put forward by Pope John Paul II to the entire code made it impossible for bishops to dismiss priests. Authority for doing so became centralized in the Vatican.

At the time, the pope appeared to be responding to a wave of priests abandoning the priesthood. However, the change ended up constraining the bishops. They had to retain the abusive priests unless the latter were found guilty at a canonical trial and the Vatican â€“ officially, the pope â€“ agreed to dismiss them.

At most, bishops could suspend priestsâ€™ clerical faculties: that is, priestsâ€™ authorization to say mass and administer other sacraments, or present themselves publicly as priests, for a short time. But they could not do so permanently.

The 1983 code also reduced the maximum time within which proceedings could be initiated against priests having sex with a child to five years.

With victims often, understandably, not coming forward for years, that meant many priests escaped internal punishment by the Vatican.

Canonical trials also require the cooperation of the victim as a witness and are another obstacle to holding priests accountable. The code has encouraged the very inaction by bishops that the pope condemns.

There are no provisions in canon law that specify what is to be done if a bishop has failed to act on a case of suspected or actual child sex abuse.

Power lies with the pope

Its job is to â€œpromote and safeguard the faith.â€

The Congregation for the Doctrine of the Faith may tell the bishop to conduct a canonical trial, may conduct one itself, or accept or reject a request for dismissal and apply conditions. Priests can appeal the verdicts and sentences. The Vatican sometimes overrules bishops who want to dismiss priests.

Although it is entirely within his power to do so, Pope Francis has not altered the Code of Canon Law with regard to clergy child sex abuse and how it is handled by bishops.

For the church truly to hold priests and their bishops accountable for child sex abuse, this is an important step.