The era of right-wing judicial supremacy

Image via screengrab.
Bill Blum
and
The Progressive
August 02, 2022Bank

In Federalist No. 78, Alexander Hamilton famously predicted that the judicial branch of government would “always be the least dangerous to the political rights of the Constitution; because it will be least in a capacity to annoy or injure them.” In retrospect, Hamilton could not have been more wrong.

The U.S. Supreme Court is now dominated by five hardcore ideologues—three of them nominated by former President Donald Trump. In its most recent term, the court made a mockery of Hamilton’s forecast of judicial restraint, crossing a variety of political fault lines on abortion, the Second Amendment, “religious liberty” and the separation of church and state, climate change, civil rights, campaign finance, and voting rights (see sidebar). Far from the neutral institution envisioned by Hamilton, the court has become, according to many commentators, a quasi-legislative body dedicated to advancing a regressive political agenda free from democratic accountability.

Welcome to the new era of right-wing judicial supremacy. 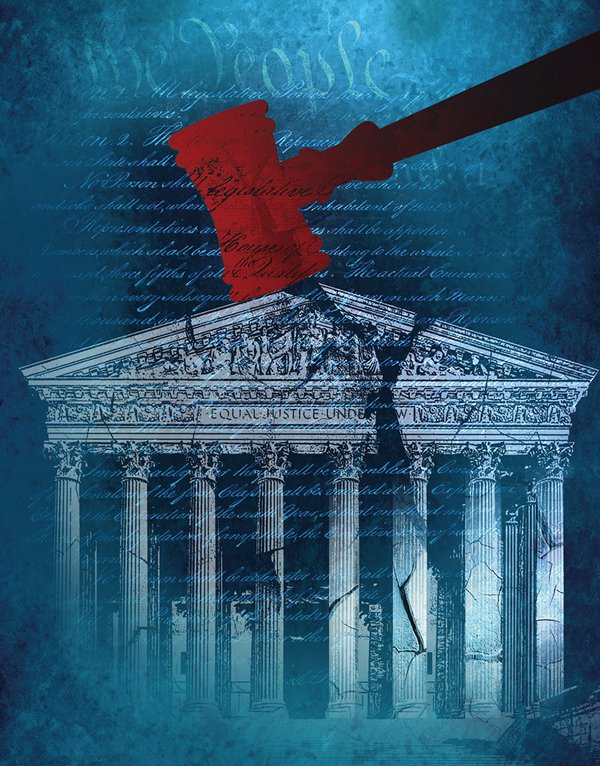 Alito declared that both Roe and Casey were “egregiously wrong from the start” because the word “abortion” doesn’t appear anywhere in the first eight amendments to the Constitution, or anywhere else in our national charter. He also pontificated that abortion cannot be considered an implied or “unenumerated” fundamental right under the Fourteenth Amendment’s due process clause—as Roe and Casey both held—because it is not “deeply rooted in [our] history and tradition.” As a result, he concluded, the court was free to overrule Roe and Casey—decided in 1973 and 1992, respectively—unconstrained by the doctrine of stare decisis, which holds that judges should adhere to precedent.

Instead of respecting precedent, Alito reached deep into the bowels of Anglo-American common law to override it. He cited, among other sources, the work of Henry de Bracton, a thirteenth-century English cleric and judge who condemned abortions as homicide, and, a seventeenth-century English jurist who described abortion as a “great crime” and sentenced at least three women to death for witchcraft. By the time the Fourteenth Amendment was ratified, Alito raged on, “three-quarters of the States [had] made abortion a crime at all stages of pregnancy,” in order to prove his point that abortion rights are not deeply rooted in our history.

The only solution, in Alito’s view, was to strip abortion of its Constitutional protections and return the issue to “the people’s elected representatives.” According to the pro-choice Guttmacher Institute, in response to Dobbs, twenty-six states have already outlawed or severely restricted abortion, or will soon do so.

Alito’s analysis, though the last word in our Constitutional system, is deeply flawed. While controversial, Roe and Casey were decided squarely in line with prior Supreme Court precedents that extended the concept of liberty under the Fourteenth Amendment to other unenumerated privacy interests like the right to interracial marriage (Loving v. Virginia, 1967), the right to obtain contraceptives (Griswold v. Connecticut, 1965), and the right to not be sterilized without consent (Skinner v. Oklahoma, 1942).

Nor is it true, as a matter of historical fact, that abortion at all stages was mostly illegal before Roe. As University of Illinois history professor Leslie J. Reagan explained in her definitive study, When Abortion Was a Crime, “During the eighteenth and early nineteenth centuries, abortion of early pregnancy was legal under common law. Abortions were illegal only after ‘quickening,’ the point at which a pregnant woman could feel the movements of the fetus (approximately the fourth month of pregnancy).”

Repudiating Roe and Casey was also unnecessary. The court easily could have upheld the Mississippi statute without scrapping the federal right entirely. This was the position advocated by Chief Justice John Roberts, who penned a concurring opinion, agreeing that the Mississippi law should be upheld, but urging his colleagues to move more cautiously.

A draft of Alito’s opinion was leaked to the press in May, sparking speculation that Roberts has lost control of the panel he heads. Together with the recent revelations that Virginia “Ginni” Thomas, the wife of Justice Thomas, was part of the plot to overturn the 2020 presidential election, and the arrest of a man in early June for attempting to murder Justice Kavanaugh, the leak has created the impression that a once stable institution is now in turmoil as it moves ever rapidly to the right.

Both Dobbs and this term’s transformational ruling on the Second Amendment — New York State Rifle & Pistol Association Inc. v. Bruen— are based on the judicial philosophy known as “originalism.”

Originalism has led the court to enter a legal fantasy world in which the answers to contemporary questions about matters such as votingrights and gerrymandering, unionorganizing, the death penalty, abortion, and gun control are to be found solely in the meaning that the Constitution had for the Founding Fathers. For originalists, this meaning is forever fixed, and can only be altered by Constitutional amendments.

As a tool of judicial decision-making, originalism has been around a long time. One of its earliest expressions came in the Dred Scott case of 1857, perhaps the most odious decision ever issued by the Supreme Court, which held that Black Americans of African descent could never be U.S. citizens. Plessy v. Ferguson, the 1896 decision that upheld the constitutionality of racial segregation even after the ratification of the Thirteenth, Fourteenth, and Fifteenth Amendments, is another originalist landmark.

But as an explicit judicial theory, originalism did not come into vogue until the early 1980s, popularized by Reagan-era Attorney General Ed Meese, the late, failed Supreme Court nominee Robert Bork, and the late Justice Antonin Scalia. Since then, it has been embraced almost universally by legal conservatives. 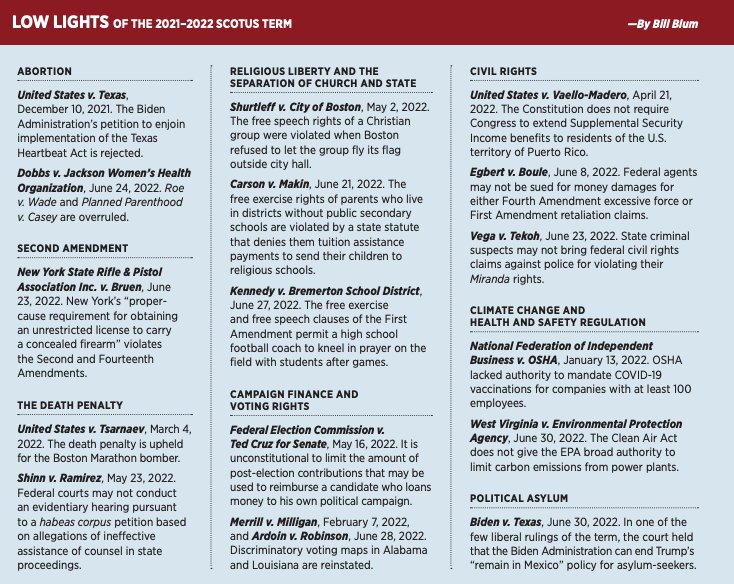 In Bruen, the court struck down a New York regulation that required applicants for concealed handgun permits to show a special need for protection. In a 6-3 opinion written by Thomas, and joined by all the court’s Republican appointees, including Roberts, the court held that the regulation—which has been on the books since 1911—was a historic “outlier” on gun control, and as such, violated the Second Amendment right to “bear arms” outside the home.

If anything, Thomas is an even more incompetent historian than Alito. As Fordham University history professor Saul Cornell, one of the foremost authorities on the actual history of the Second Amendment, noted in a scathing critique of Bruen published by SCOTUSBlog:

“The originalist methodology applied by Thomas has one set of rules that apply to interpreting legal texts that support gun rights, and another more demanding set of standards that apply to those that undermine them. The Thomas version of originalism might be summarized as follows: No amount of evidence is enough to support gun control, but no iota of evidence is too little to legitimate gun-rights claims. If one of the goals of originalism was to limit judicial discretion (a value few originalists continue to espouse now that they have a supermajority on the court), then the Thomas rule does the opposite. It provides a license to cherry-pick evidence with reckless abandon if the materials support the ideological agenda of the Federalist Society.”

The big question now is where the court goes from here. In his concurring opinion in Dobbs, Thomas called on the court to reconsider such “substantive due process” privacy-based precedents as the right to contraception (Griswold), the right to engage in same-sex intimacy (Lawrence v. Texas, 2003), and the right to same-sex marriage (Obergefell v. Hodges, 2015). Notably absent from Thomas’s hit list was interracial marriage. Thomas, of course, is married to a white woman.

As hypocritical and cruel as Thomas is, he no longer operates on the fringes of the bench. To the contrary, he has become one of the court’s intellectual leaders.

If there is any kind of afterlife, Alexander Hamilton is no doubt turning in his grave at the Trinity Church cemetery in Lower Manhattan.