'Freedom convoy' arrests: Why rejoicing when occupiers get punished isn’t the answer

The crackdown against the so-called “Freedom Convoy” protesters who have occupied Canada’s national capital for more than three weeks finally happened on Friday, with more than 100 arrests and many of the trucks being towed away. Ottawa interim police chief Steve Bell announced hundreds of police will be working non-stop until the city is cleared.

Some children may have witnessed their parents’ arrest, may have been used as human shields or separated from their parents by jail walls.

Many in Ottawa and across Canada have been calling for police action. Some on Twitter have even said they’re watching excitedly with popcorn. Many welcome the enactment of the Emergencies Act allowing expanded state powers to clear out the convoy. And a poll suggests the majority support this action even if means “people who will not leave may get hurt, or worse.”

What does this all reveal about Canadians?

I have been part of community-organizing conversations to respond to the Ottawa occupation as a member of the Criminalization and Punishment Education Project. I am a postdoctoral fellow at the University of Ottawa and have written about the carceral state and non-violent alternatives. My colleagues and I recently published a piece on “carceral enjoyments” — the satisfaction in seeing others punished through state institutions — and this is exactly what we’re seeing happen in Ottawa right now.

The so-called ‘freedom convoy’ has occupied Ottawa for over three weeks. The police are pushing to clear the blockades now, with tactical officers on the ground carrying rifles, gas masks and duffle bags.

The last three weeks have seen intense criticism of law enforcement’s lack of response to the convoy, especially in comparison to responses against other protests led by Indigenous and racialized people.

Residents reported hundreds of hate incidents, the 911 line was purposely jammed and people were exposed to high levels of noise at all hours.

People are justified in these emotions, but carceral responses are not the answer. 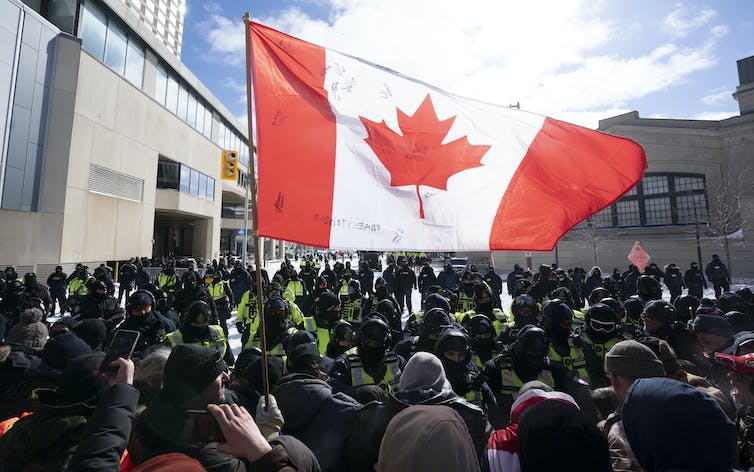 Police move the line up as they work to end a protest, which started in opposition to mandatory COVID-19 vaccine mandates and grew into a broader anti-government demonstration and occupation.

Carceral enjoyments is a term coined by political scientist Andrew Dilts. It refers to a type of satisfaction that arises from witnessing the “social death” of other people through carceral action — such as arrest and confinement in jail.

And social death (coined by sociologist Orlando Patterson) refers to the end of a person’s ability to function as a social being. It happens when people are set apart from the rest.

Dilts argues if we want to disrupt white supremacy, we need to pay attention to the pleasures of carcerality and develop strategies to disrupt those enjoyments. Recognizing our material and emotional attachments to carceral enjoyments lets us cultivate certain ways of “killing the joy” of seeing others punished.

Killing joy references the work of scholar Sara Ahmed on feminists speaking uncomfortable, necessary truths. Killing joy in the case of the convoy means disrupting the pleasure of seeing others punished as well as resisting reforms that extend the reach of the carceral state.

Norwegian sociologists Thomas Mathiesen and Ole Kristian Hjemdal write about “suitable victims” of punishment, and they reject the legitimacy of inflicting pain through policing and imprisonment in order for others to gain the pleasure of revenge.

Convoy participants have been cast as suitable targets of carceral action. There is feeling present that this group may not respond to anything except aggression, and that they “bring it upon themselves.”

Convoy participants have dehumanized many, but they have also been dehumanized. 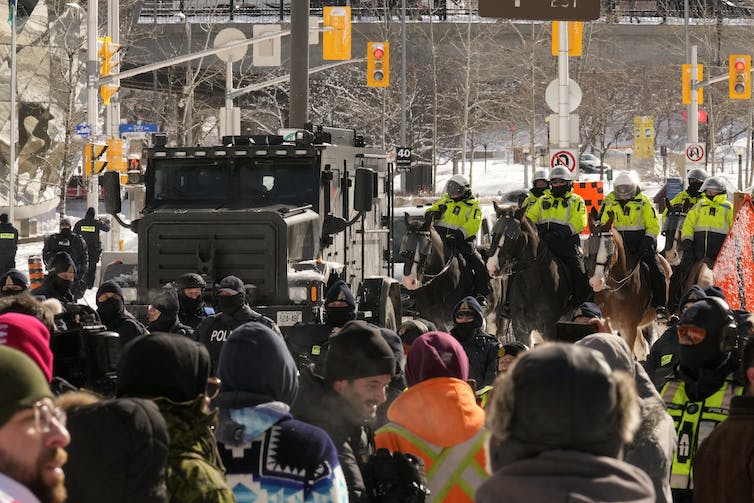 Police officers on horseback and an armoured vehicle are shown near the site of a trucker blockade in Ottawa, on Feb. 18, 2022.

The carceral state has extended its reach in response to the convoy. Neither the House of Commons nor the Senate met today over the Emergencies Act invocation, with House leaders expressing security concerns.

Police have set up at least 100 checkpoints around the downtown core. Only individuals with a “lawful” purpose for needing to be in the core will be permitted entry.

The Children’s Aid Society of Ottawa is working alongside police regarding children present. Arrest is not only harmful to adults, but also to children who witness it.

It is unclear what precedent this crackdown sets for other protests and organizers in Ottawa, as well as normalizing police violence and additional resourcing.

It is important for the convoy to end, but we shouldn’t eat popcorn while watching.

We must continue to imagine a better future that features non-carceral responses to transgression in our communities — by equipping communities with the tools they need to disrupt and intervene in patterns of harm, but also developing accountability processes for those who enact it. Much work needs to be done to counter fascism, extremism and white supremacy, but carceral enjoyment from policing and imprisonment isn’t the answer.

Choosing real safety for all in our society requires avoiding dehumanization, including people that have caused and continue to cause harm.

Carceral options are appealing because they are tangible and the process is familiar, but we must continue to develop effective and safe ways to de-escalate violent situations without using carceral tools.