President Joe Biden delivers remarks on the passing of the bipartisan Infrastructure Investment and Jobs Act, Tuesday, August 10, 2021, in the East Room of the White House.

As Republicans scrambled to pass a tax giveaway to the wealthy in late 2017, Donald Trump developed a slogan: "How's your 401(k) doing?"

Trump floated the inquiry at fundraisers, campaign rallies, and White House events. While less than half of private sector employees even had a 401(k) at the time, some of Trump's most fervent supporters adopted the mantra. As reporters scoured the earth for every last 2016 Trump voter to ask what they thought of the job he was doing, many of them responded like Pavlov's dogs: "My 401(k) has soared under Trump."

The truth is, President Obama's economy grew the stock market more than Trump's did even before the pandemic hit. But that's beside the point. Trump remained focused on the stock market throughout his tenure, and his cult followers were convinced their personal finances had improved by leaps and bounds.

In fact, in one of the worst debate performances in modern political history, Trump crassly warned voters of Biden, "If he gets in, you will have a depression the likes of which you have never seen. Your 401(k)s will go to hell."

The stock market disagreed almost immediately after Biden's victory, and it has logged historic growth ever since. One year after he was elected, the S&P 500 was up 37%, a presidential record. On Friday, following news of the U.S. economy adding 531,000 jobs in October, stocks hit record highs again under Biden (though the day's trading hadn't closed at the time of publication). Here's what that growth looks like in chart form ever since Biden was elected last November. 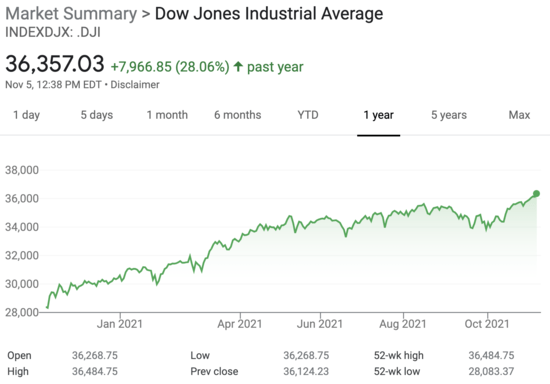 Following their Tuesday night drubbing, Democrats have come up with all sorts of explanations for why Democratic gubernatorial candidates in both Virginia and New Jersey had such a bruising night even though New Jersey Gov. Phil Murphy ultimately prevailed. The merit of those explanations varies, but here's one thing to consider: Voters don't seem to be getting any good news about the Biden administration. And sure, that's partly a matter of what the media is writing, but it's also a matter of what Democrats are selling. And they simply aren't capitalizing on a heap of good news.

As former GOP strategist and anti-Trumper Stuart Stevens noted Friday, the Dow Jones is in 36,000-plus territory; Biden has added jobs to the economy—more than 5 million—at a record clip; and in 10 months, the Biden administration has administered 220 million vaccine doses with 70% of the U.S. adult population now fully vaccinated. And yet, less than 30% of voters say the country is on the right track.

"The Democratic Party has a messaging problem," Stevens concluded.

The truth is, the summer delta variant surge dealt a giant blow to the American psyche after everyone got a little taste of freedom last spring. But since then, the Biden administration has done such an effective job in its continued vaccination push that the pandemic has receded as a chief concern for most Americans. On Election Day, Civiqs tracking found that just 13% are extremely concerned about outbreaks in their local area.

Likewise, this week's Civiqs survey asking voters to gauge the issues that cause them the most dissatisfaction found the pandemic ranked so low among their list of concerns that it didn't even break the top 10. Just 36% of voters counted themselves dissatisfied with the handling of the pandemic in their area.

In that same survey, financial issues such as the price of gas and consumer goods and a lack of personal savings topped the list.

Civiqs tracking also shows voters' views of the national economy are abysmal, plummeting since late April when the country momentarily began to believe the worst of the pandemic was over.

Some of Americans' concerns over the cost of gas and consumer goods is justified; prices of certain items are steep (though Democrats also provided most Americans with a financial boost and tax cuts through passage of the American Rescue Plan). And while the national economy certainly suffered a setback during the delta surge, it is both demonstrably trending back in a positive direction and undoubtedly better than it was when Joe Biden was sworn in as the 46th president of the United States.

So if Democrats in Congress are worried about the midterms, it's time for them to simply pass Biden's agenda so everyone—including the media—can quit talking about it and start selling the Biden administration's considerable number of accomplishments.