'Next level BS': Barrett tried to claim the US Supreme Court isn’t full 'of partisan hacks.' Critics brought the receipts 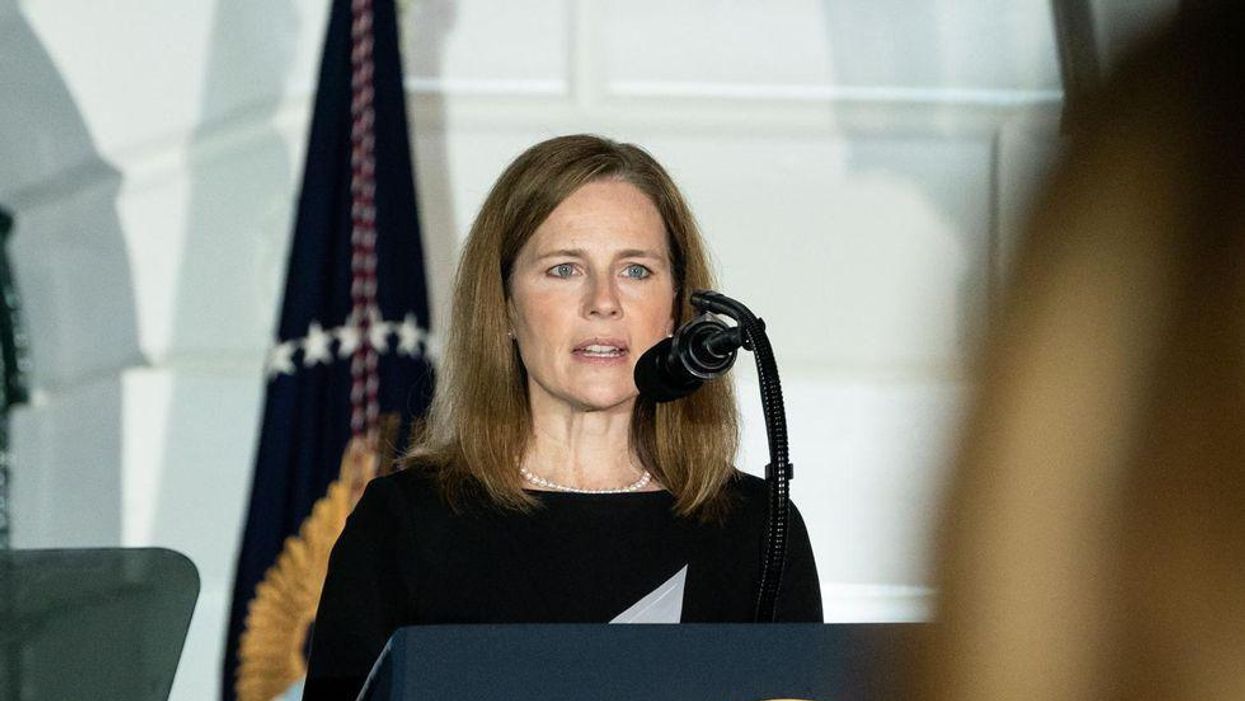 Justice Amy Coney Barrett, the newest member of the U.S. Supreme Court whose nomination was rammed through the Senate by then-Republican Majority Leader Mitch McConnell, on Sunday told guests invited to celebrate the 30th anniversary of the McConnell Center at the University of Louisville, "My goal today is to convince you that this court is not comprised of a bunch of partisan hacks."

She was roundly criticized and mocked for that claim, which was reported by the Louisville Courier Journal.

Barrett was nominated immediately after liberal Justice Ruth Bader Ginsburg's death, before she had even been buried. She was confirmed one week before the November 2020 election in a 52-48 vote, entirely on party lines, and sworn in the very next day, all thanks to the efforts of Senator Mitch McConnell. McConnell in 2016 infamously blocked President Barack Obama's Supreme Court nominee, Merrick Garland, from even getting a committee hearing, then pushed through Neil Gorsuch and Brett Kavanaugh before Barrett's nomination.

McConnell: “It was a wonderful birthday present for Hillary Clinton to confirm Amy Coney Barrett to the Supreme Cou… https://t.co/codRWKeWnf
— The Daily Wire (@The Daily Wire) 1604003384.0

The court now sits with a 6-3 highly-conservative majority, and some across the country feel several of the conservatives have flouted judicial ethics by weighing in on issues, directly or in directly. Justice Clarence Thomas's wife, Ginni Thomas, is a far right wing lobbyist who used to run a Tea Party organization. She is believed to have had a hand in President Donald Trump's expulsion of transgender service members from the U.S. Armed Forces. And Justice Kavanaugh, infamously during his Senate confirmation hearing, infamously threatened revenge against Democrats.

In fact, as Amy Coney Barrett was being sworn in, The New Republic published an opinion piece stating she and Justice Kavanaugh "have demonstrated this week that they should be thought of as political operatives, not justices."

Barrett of course brought this perception on herself, allowing her nomination to be pushed through in the weeks before a highly controversial presidential election, appearing at a super-spreader event at the White House celebrating her nomination, then later standing on the White House balcony with President Trump, days before the election, all of which effectively worked as an endorsement of his re-election.

L.A. Times columnist Jackie Calmes noted at the time just how unprecedented this single act was:

Many are mocking Barrett's claim.

"let me show that SCOTUS is nonpartisan by speaking at the McConnell Center & being introduced by Sen. McConnell wh… https://t.co/TAXBkhrcjV
— Leah Litman (@Leah Litman) 1631534958.0

Justice Amy Coney Barrett expressed concern Sunday that she can’t have her cake and eat it too
— Scott Shapiro (@Scott Shapiro) 1631534628.0

This is an actual photograph of Amy Coney Barrett complaining that people see the Supreme Court as a partisan Repub… https://t.co/X2O2HaXhje
— Arlen Parsa (@Arlen Parsa) 1631538402.0

Fair. The phrase is “fundamentalist zealots with no respect for the law”. https://t.co/aP8VGFrnoQ
— Amanda Marcotte (@Amanda Marcotte) 1631529410.0

Amy Coney Barrett sitting up there with McConnell saying she’s not a partisan hack is a flex. But the flex is “Look… https://t.co/vbH0slhDHO
— Elie Mystal (@Elie Mystal) 1631538214.0